UN in accord with Turkey on voluntary refugee return 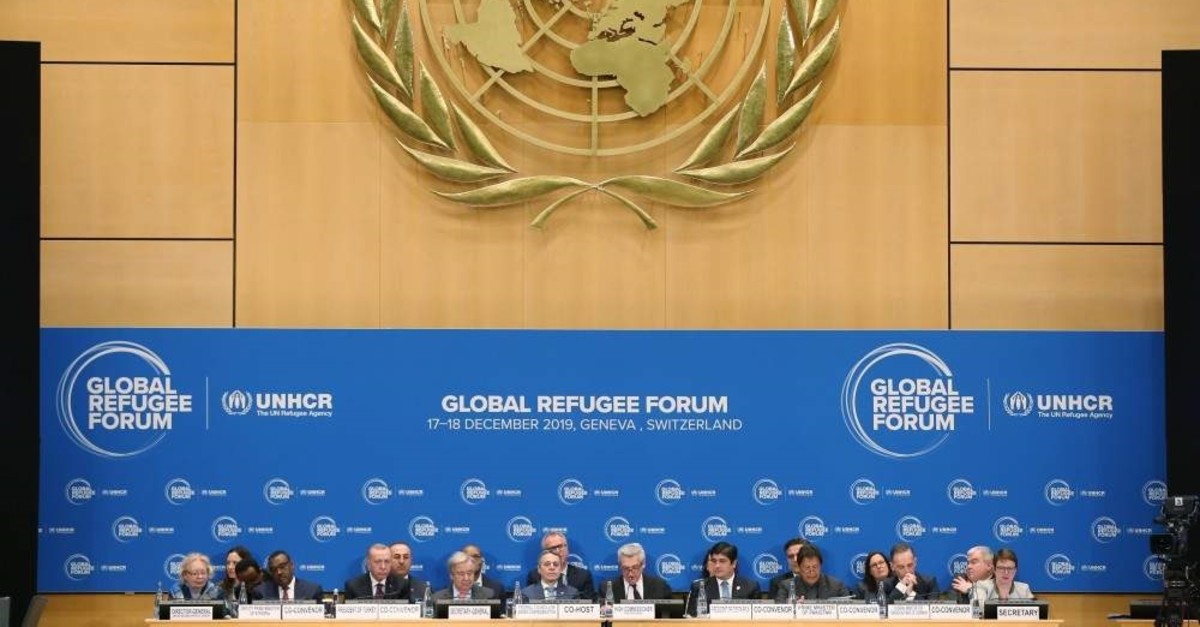 The U.N. is in agreement with Turkey on the voluntary return of Syrian refugees, urging further humanitarian support

The U.N. High Commissioner for Refugees Filippo Grandi said Tuesday that he agrees with Turkey on the issue of the voluntary return of Syrian refugees. Speaking on day two of the Global Refugee Forum in Geneva, Switzerland – co-chaired by Turkey – the U.N. refugee chief reiterated the long-voiced words of President Recep Tayyip Erdoğan on the voluntary return and humanitarian aid for refugees.

"Our position on return has always been the same. Return can only be voluntary, and President Erdoğan said it very clearly himself," the U.N. Refugee Agency (UNHCR) chief said.

"Our position has always been that if people return to Syria or wherever they return, they need and deserve humanitarian support, and I hope that this continues to be the case. So that wherever they go, whether from Turkey or elsewhere, they go preferably to their place of origin. That support has been difficult to obtain,” Grandi added, touching upon the need for humanitarian aid.

Turkey has frequently condemned the international community’s reluctance to show any support for the return of Syrians. Turkey has long been fighting to eradicate the presence of terrorist groups in northern Syria, conducting three cross-border operations there – Operation Olive Branch, Operation Euphrates Shield and, most recently, Operation Peace Spring.

Following the liberation of areas in northern Syria, efforts to clear bombs and improvised explosive devices were launched to create an environment of peace for the return of refugees, and administrative duties were given to local councils. According to U.N. figures, 60% of the people displaced due to the war have returned to their homes in the areas where Operation Peace Spring took place.

In order to establish long-lasting stability and normalization in Syria, the return of displaced Syrians to their hometowns is just as important as the fight against terrorism, Erdoğan said Tuesday, adding that keeping refugees in Turkey should not be the only approach to solving the refugee crisis.

On the other hand, U.N. Secretary-General Antonio Guterres is urging the Security Council to authorize the delivery of critically needed humanitarian aid across borders and conflict lines in Syria for another year, saying this aid mainly to opposition-held areas "has staved off an even larger humanitarian crisis inside Syria.”

Guterres said in a report to the council circulated Monday that over 1 million people receive cross-border assistance every month.

"The United Nations does not have an alternative means of reaching people in need in the areas in which cross-border assistance is being provided,” he said.

He pointed out that this year's $3.3 billion humanitarian appeal for Syria is only 55% funded, at $1.8 billion, urging donors to provide additional support.

The forum, which started on Monday, features a series of sessions and events as well as speakers from around the world who are experts on the issue. It is organized by the UNHCR in Geneva and Switzerland with the aim of generating new approaches and commitments from a variety of actors to assist and respond to refugee needs more effectively.

Being conducted for the first time with the participation of representatives from several countries, U.N. agencies, non-governmental organizations and many other international actors, the forum, in its words, "comes at the end of a tumultuous decade," which has been marked by various refugee crises.

Erdoğan also said that thanks to Turkey's efforts in northern Syria to liberalize the region from terrorist elements, so far 371,000 Syrians have returned to their hometowns voluntarily.

Grandi, who mentioned that the international community had made around 700 commitments until now, said that financial aid as well as legislative regulations were among these commitments. The head of the EU delegation to Turkey, Christian Berger, also voiced that the EU agrees with Turkey saying, "We agree with Turkey regarding the fact that political problems have to be solved in order for the situation in Syria to get better. Besides, each European country appreciates Turkey hosting a large number of refugees with profound gratitude. Again, we see that many people here are mobilizing for the necessary humanitarian aid to those in need."

Foreign Affairs Minister Mevlüt Çavuşoğlu held a conference on the safe and voluntary return of Syrian refugees with his Iraqi, Jordanian and Lebanese counterparts on the sidelines of the conference in Geneva.

“Discussed voluntary and safe returns of Syrians w/Mohamed Ali Alhakim FM of #Iraq, @AymanHSafadi FM of #Jordan and @Gebran_Bassil FM of #Lebanon. Our quadripartite cooperation will continue,” Çavuşoğlu wrote in a tweet.

Çavuşoğlu had previously met with the three senior officials on the same issue within the scope of the 74th General Assembly of the United Nations in New York that took place in September.