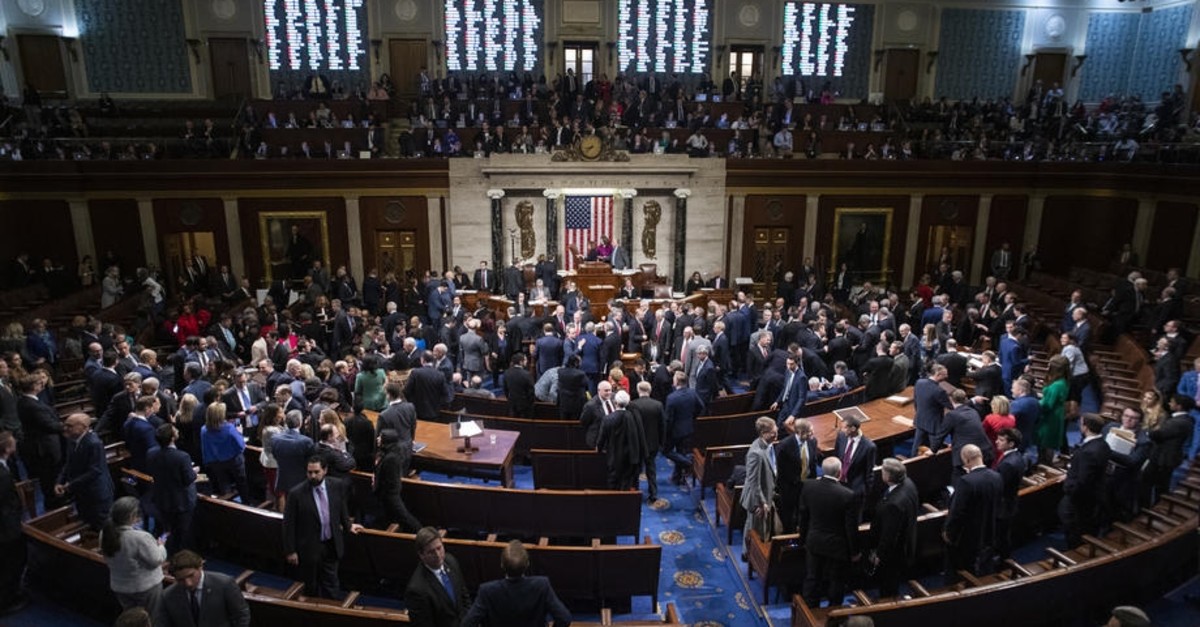 US Democratic Speaker of the House Nancy Pelosi presides over the votes to officially impeach US President Donald J. Trump (EPA Photo)
by Daily Sabah Dec 20, 2019 11:25 am

The Foreign Ministry condemned the U.S. Congress for exploiting the defense spending bill with anti-Turkey measures "for political interests."

Aksoy noted that the bill damages not only ties but also the U.S.' own ties in the region and Washington will realize that such initiatives do not contribute to stability and peace in the region.

The 86-8 vote now sends the National Defense Authorization Act (NDAA), which is part of a two-piece package that includes a wider government spending bill, to U.S. President Donald Trump to be signed into law, which he is expected to do shortly. The House passed the legislation earlier Tuesday.

The defense spending bill was packed with additional measures aimed at Turkey that include a prohibition on transferring the fifth-generation F-35 joint strike fighter, or its parts, to Turkey over its purchase of the Russian S-400 anti-air missile system, and calls for Trump to implement sanctions on Turkey over the acquisition under the Countering America's Adversaries Through Sanctions Act.

It further provides the Pentagon with some $30 million to purchase the F-35 aircraft initially bought by Turkey.

Turkey's acquisition of the advanced Russian air-defense system prompted the Trump administration to remove Turkey from the F-35 program in July. The U.S. maintains that the system could be used by Russia to covertly obtain classified details on the jet and is incompatible with NATO systems.

The defense spending bill further lifts the U.S. arms embargo on the Greek Cypriot administration of southern Cyprus, and imposes sanctions on vessels used to construct the Turkstream and Nord Stream 2 pipelines.

Turkey criticized the U.S. over threats to remove it from the F-35 program due to its purchase of the S-400 Russian air defense system.

"We remind once more that the language of threats and sanctions will never dissuade Turkey from resolutely taking steps to ensure its national security," the country's Foreign Ministry said in a statement.