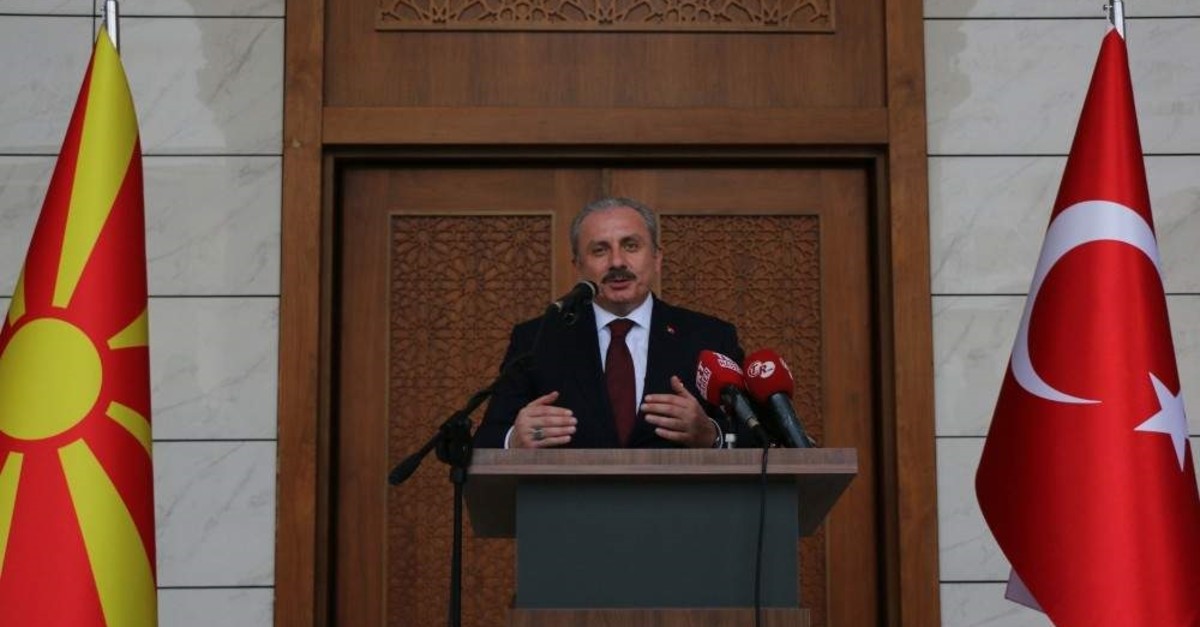 Turkey has alternatives to make up for the U.S. sanctions in a multi-polar and diverse world system, Parliament Speaker Mustafa Şentop said, noting that the issue of sanctions has been exploited by Washington to put psychological pressure on countries.

"The U.S. pulls the sanctions card as a threat when it has problems in regards to maintaining relations with various countries," Şentop told the Anadolu Agency in Skopje on Sunday.

However, the U.S.' frequent use of sanctions as a threat has made it ineffective, Şentop claimed, noting that he does not think the recent bill approved by U.S. President Donald Trump will have any impact on the Turkish economy.

The $738 billion defense bill included additional measures targeting Turkey, including a prohibition on transferring fifth-generation F-35 fighter jets, or its parts, due to its purchase of the Russian S-400 missile defense system. The bill also urges Trump to impose sanctions on Ankara under the Countering America's Adversaries Through Sanctions Act (CAATSA).

Şentop noted that the sanctions will not hinder Turkey's defense capacity because the country has alternatives in a diverse global system.

He went on to argue that Turkey had already faced an unofficial sanction with the U.S. attempts to remove Turkish administration from the F-35 fighter jet program, adding Washington said it would not hand over the planes.

"Isn't this a sanction, an embargo? Did we not see a similar case regarding drones and Patriot missiles?" he asked and noted that the previous negative attitude of the U.S. on Turkey led to Turkey's purchase of Russian S-400 missiles.

"Turkey is in the process of evaluating alternatives for the F-35s as you know," Şentop said and added, "Turkey is not confined to the U.S. or any other country."

Highlighting changing global dynamics, Şentop said the world is now multi-polar contrary to the bipolar system of the 20th century.

He reiterated that the sanctions and embargo plans would not adversely affect Turkey's economy and defense industry, but would harm bilateral relations.

Referring to the Turkish-Libyan military pact and its ratification by the Parliament, Şentop said, "In fact, this [agreement] is like the continuation of the previous agreement Turkey reached with Libya regarding the exclusive economic zone."

Şentop said the agreement was founded on a legitimate basis as it was signed with the U.N.-recognized Government of National Accord (GNA), which is fighting warlord Khalifa Haftar, who is supported by mercenaries and "some" Arab countries.

Responding to a question about Turkey's deployment of soldiers in Libya, Şentop said the military cooperation deal did not necessarily mean that the Ankara administration would dispatch soldiers, but this issue was open to discussion.

The parliament speaker said Europe today witnessed both Islamophobia and xenophobia due to its cultural structure which is "enclosed" and "singular."

"Maybe, there has been a political plurality, however, [Europe] acted with an understanding based on a single culture," he said, adding globalization has changed the globe significantly as cultures freely moved around the word.

"Europe is not ready as it has a monist cultural system. Now, it meets new cultures," he added.

Şentop went on to say that the European population had aged gradually and the continent was in need of dynamic and young people to sustain its social security structure.

He also said there were many people resorting to living abroad due to unrest, and wars triggered by European countries, as well as financial grievances hindering a life with high standards.

The migration of these people might have a positive impact on Europe, contributing to its multi-cultural, multi-religious and multi-language social structure, Şentop added.

Şentop said he was in North Macedonia to mark the Turkish Language Day of Dec. 21.

He added that North Macedonia was located in a strategically important region where genocides and massacres were observed in the past century and the country plays a vital role for regional and global peace.

Stating that Turkey was the first country to recognize the independence of North Macedonia, Şentop stressed that the Turkish administration always supported the country at difficult times and amid its membership process to European-North Atlantic organizations.