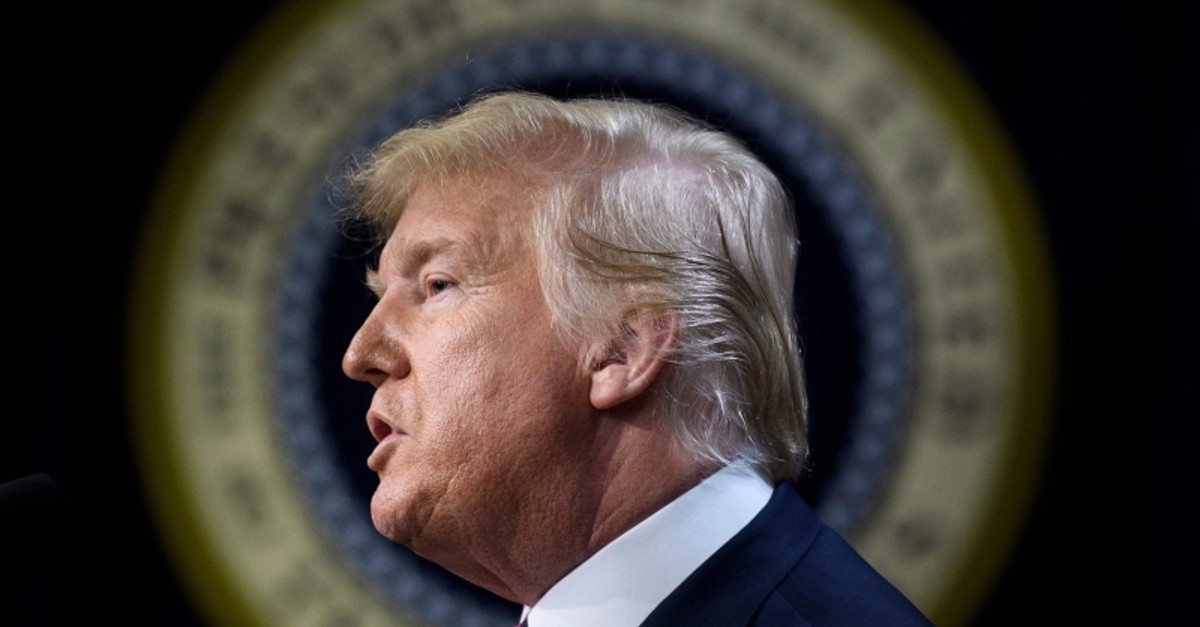 US President Donald Trump speaks during a summit on transforming mental health treatment to combat homelessness, violence and substance abuse at the White House campus on December 19, 2019 in Washington,DC. (AFP Photo)
by Daily Sabah Dec 24, 2019 1:59 am

U.S. President Donald Trump's administration is pushing back against efforts by lawmakers who want to punish Turkey for buying Russian missiles, the Daily Beast news website reported on Monday.

In a seven-page memo to senators, the U.S. State Department argued its case against the "Promoting American National Security and Preventing the Resurgence of ISIS Act," which is making its way through the Senate.

Under the legislation, the U.S. would impose sanctions on Turkey for buying the Russian S-400 surface-to-air missile system, and block any sales of the F-16 or F-35 fighter jets, including parts, to Ankara, a NATO ally, according to the news site.

The memo reportedly argues that imposing sanctions on Ankara would hurt the U.S.-Turkey trade in defense gear, make Turkey a "pariah" within the NATO alliance, and make it more dependent on buying arms from Moscow.

According to the website, a U.S. State Department spokesperson praised Turkey's membership and role in the alliance.

"NATO is stronger with Turkey as a member and has been for nearly 70 years. Turkey has been a significant contributor to NATO collective security for decades," said the spokesperson.

The official also accused Russia of driving a wedge between the two countries and said, "We are working to maintain strong cooperation within the Alliance."

In the document, the Trump administration also lays out its objections to provisions of the bill that would allow "Kurdish allies" to come to the U.S. as refugees more quickly, according to the Daily Beast's story.

Despite decades of cooperation, tensions have been running high between Washington and Ankara, notably over U.S. support for the YPG terrorist group fighting in Syria, which Ankara views as a security threat.

Despite decades of cooperation, tensions have been running high between Washington and Ankara, notably over a range of issues, including Washington’s support for the YPG terror group, inaction against the Gülenist Terror Group (FETÖ) and anti-Turkish legislation.

Ankara and Washington have also been in disagreement over NATO ally Turkey's purchase of the Russian S-400 system, which Washington says is not compatible with NATO defenses and poses a threat to its F-35 stealth fighter jets, which Lockheed Martin Corp. is developing.

Turkey and the U.S. have recently had their relationship rocked by the Republican-led U.S. Senate who voted in favor of the sanctions bill against Turkey’s S-400 purchase and Operation Peace Spring. Another bill proposing levying sanctions on Turkey was approved in the House of Representatives on Oct. 29.

Turkey, however, emphasized that the S-400s would not be integrated into NATO systems and would pose no threat to the alliance, rejecting calls to back out of the deal. Ankara also stressed it was the U.S.' refusal to sell it Patriots that led it to seek out other sellers, adding that Russia had offered it a better deal, including technology transfers.

Turkish officials have also proposed setting up a commission to investigate the issue, but it has yet to get a positive response from the U.S.

The acquisition of the Russian system prompted the Trump administration in July to remove Turkey from the F-35 fifth-generation joint strike fighter program, in which Ankara was a major buyer and parts manufacturer. Tensions deepened soon after when Turkey received its first shipment of the Russian equipment.

The Trump administration has held off on levying sanctions, despite Trump having signed a sweeping sanctions law – namely CAATSA, in 2017, mandating sanctions for countries who do business with the Russian military.

Certain U.S. lawmakers, including Republican Sen. Lindsey Graham, ramped up efforts to impose measures against Ankara in October when Turkey launched Operation Peace Spring in an attempt to clear northern Syria of YPG terrorists. Normally an ardent defender of fellow-Republican Trump, Graham and some others in his party have been harshly critical of Trump's decision to withdraw troops from northeastern Syria ahead of the Turkish counter-terror operation.