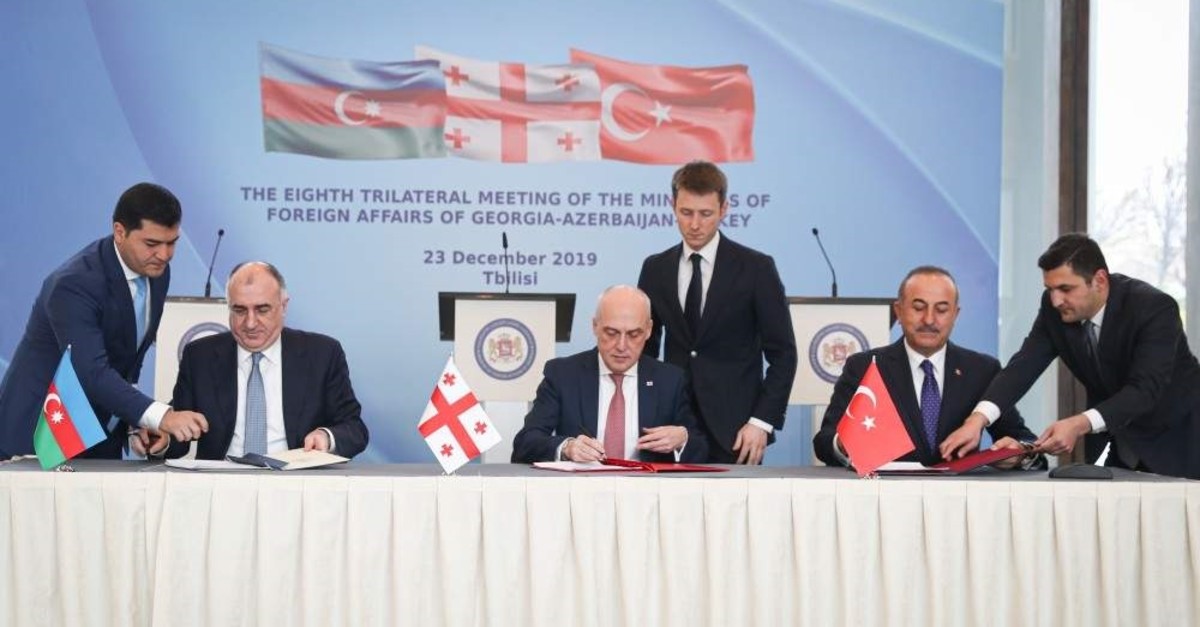 The foreign ministers of Turkey, Azerbaijan and Georgia assessed the progress made in trilateral cooperation and discussed recent regional and global developments in the Georgian capital of Tbilisi on Monday.

Signing a joint declaration – the Tbilisi Statement – and a trilateral sectoral cooperation action plan, Çavuşoğlu said Turkey, Azerbaijan and Georgia enjoyed excellent relations, cooperation and solidarity that set a good example for other countries in the region.

"We believe that such mechanisms provide an effective platform to discuss bilateral and regional issues. Our mechanisms of cooperation lay the ground for building sustainable peace, stability, and prosperity in our region," Çavuşoğlu said.

He underlined that the trilateral sectoral cooperation action plan would develop the three countries' collaboration through practical cooperation areas and concrete projects, which would be implemented in the areas such as transport, trade, tourism, agriculture, education, environment and culture.

"These projects ensure energy security and resource diversification of the region and Europe," he said.

Çavuşoğlu also stressed that Turkey would always support the sovereignty and territorial integrity of Azerbaijan and Georgia.

Georgia's Zalkaliani said the trilateral summit was an important platform for dialogue and boosting cooperation among the countries.

Zalkaliani said the three countries exemplified a successful partnership by cooperating on the pipeline and railway projects, adding that they had a strategic partnership.

Azerbaijani top diplomat Mammadyarov said the Southern Gas Corridor project, which would extend to Italy, would be completed by the end of next year.

Mammadyarov added that Baku wanted to reach the Balkans in terms of connecting with other countries and pipelines.

He stressed that ongoing issues of territorial integrity in Georgia and Azerbaijan should be resolved through international law.