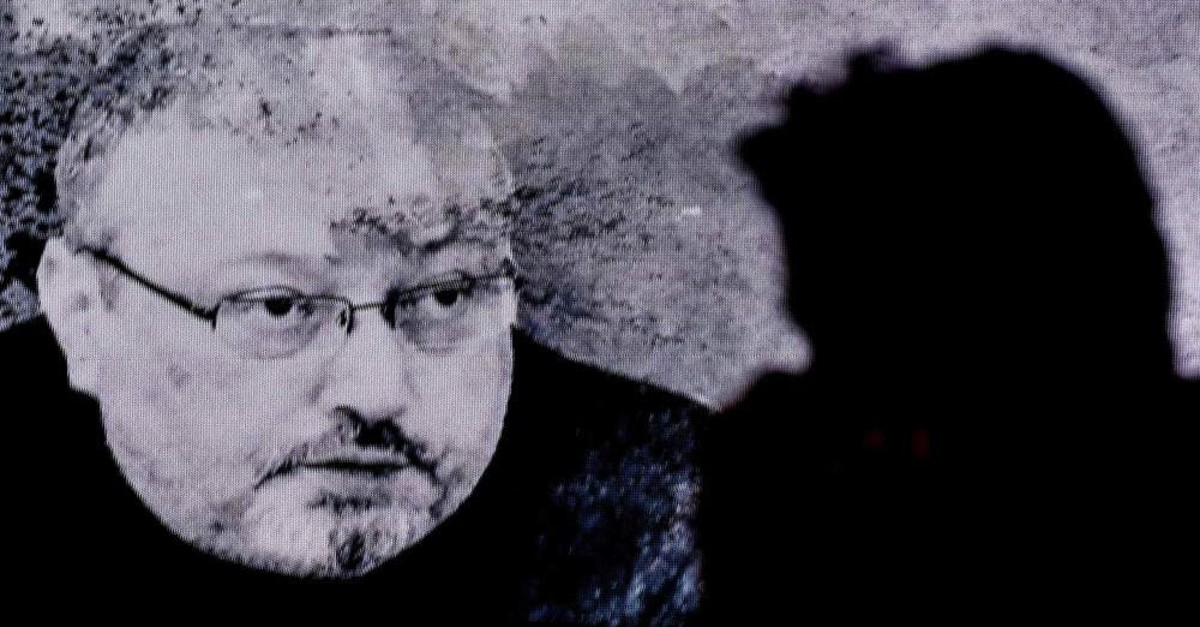 In this file photo taken on Nov. 11, 2018 a man passes in front of a screen showing Jamal Khashoggi during a commemoration event of Khashoggi's supporters in Istanbul. (Photo by OZAN KOSE / AFP)
by Daily Sabah Dec 30, 2019 2:06 pm
The decision of a Saudi trial on the murder of Saudi journalist Jamal Khashoggi is an unacceptable attempt to cover up the real perpetrators, said the Presidential Communication Director Fahrettin Altun on Sunday.

Last week, a court in Riyadh sentenced five men to death for Khashoggi's killing despite intelligence agencies concluding it could only have been ordered by the Saudi crown prince. Writing an opinion evaluating the decision on his Medium account, Altun said that those who gave the order of murder, sent a hit squad to Istanbul and destroyed the body were declared innocent in symbolic trials.

"Press freedom and freedom of expression were ignored," he added.

Describing the efforts to cover up who the real perpetrators were is "unacceptable", Altun said that we have witnessed an attempt to acquit the perpetrators who dismembered a journalist's body in front of the whole world.

Altun also criticized the silence of institutions and countries, which have always defended the press freedom, on the issue.

The trial resulted in the clearing of two former top aides to Crown Prince Mohammed bin Salman (MBS). It has caused mounting global pressure on Saudi Arabia. A U.N. investigator said the masterminds have walked free as the country has been receiving increasing criticism over the murder.

The verdict underscores Saudi efforts to turn the page on one of its worst diplomatic crises that tarnished the crown prince's global reputation and sparked intense scrutiny of the kingdom's human rights record. It is also seen as an attempt to divert attention from the actual figures culpable for the murder by concentrating merely on the killers themselves and not on those who made the decision and gave the orders.

Altun also underlined Turkey's efforts to reveal the real perpetrators of the murder and said that the officials are doing their best by closely following the process and informing the international community.

Khashoggi was killed and dismembered by a group of Saudi operatives in the country's consulate in Istanbul on Oct. 2, 2018. Initially denying and later downplaying the incident as an accidental killing in a fistfight, Riyadh finally admitted almost three weeks after the disappearance that Khashoggi was murdered in a premeditated fashion but denied any involvement of the royal family. The incident was blamed on lower-level officials, including five who were sentenced to the death among the 21 involved in the case. Ankara has said the statement is not satisfactory and demanded genuine cooperation from Riyadh. Khashoggi's body has not been recovered and the kingdom has remained silent on its whereabouts.

The trial, which began in January, has been shrouded in secrecy, raising concerns from Turkish criminal experts who have demanded transparency and independent monitoring of the proceedings.

U.N. special rapporteur on extrajudicial killings, Agnes Callamard said in a report in August that the state of Saudi Arabia was responsible for the murder. The report also found "credible evidence" that linked Saudi Crown Prince Mohammed bin Salman to the killing of Khashoggi. The rapporteur noted that she had received no cooperation from Riyadh and minimal help from the U.S. She condemned the trial as a "mockery of justice," saying, "The fact that that the chain of command and the state have not been investigated means that the system that made it possible for Jamal Khashoggi to be killed has not been touched."
Last Update: Dec 31, 2019 12:59 pm
RELATED TOPICS