Mandate to deploy Turkish troops to Libya presented to Parliament 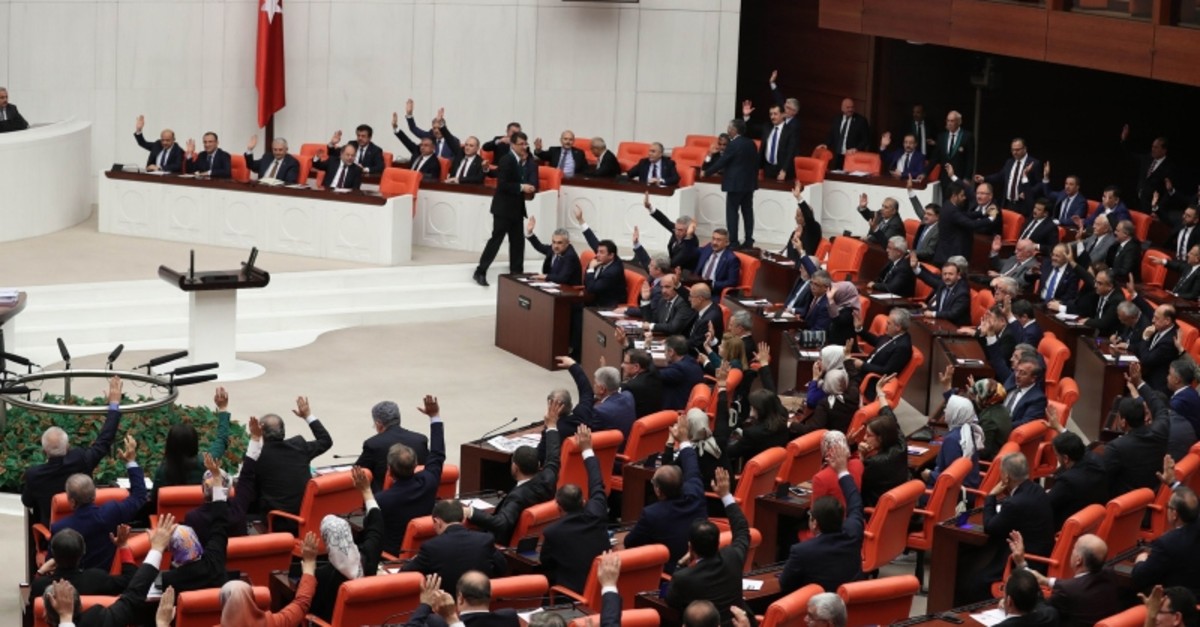 A mandate to deploy Turkish troops to Libya was presented to Parliament Monday and will be discussed by the General Assembly on Jan. 2.

The mandate will be heard at a special session of Parliament Thursday.

President Recep Tayyip Erdoğan signed a two-page resolution, stating that the developments in Libya are a threat to the region and asking for permission to deploy Turkish forces to foreign countries in order to intervene outside the borders of Turkey for a period of one year.

The mandate stated that the measure is necessary in order to take precautions against all kinds of threats to national interests, to prevent attacks by illegitimate groups in Libya against Turkey's interests, to take measures against risks such as mass migration and to provide humanitarian aid to the Libyan people.

Earlier today, Foreign Minister Mevlüt Çavuşoğlu held a meeting with opposition party leaders to argue in favor of the mandate.

Speaking after a meeting with the Good Party (İP), Çavuşoğlu stated, “As the Foreign Ministry, we submitted the memorandum to the presidency to be sent to Parliament. As the country most strongly supporting a permanent peace and political process in Libya, we informed the chairman on this matter," Çavuşoğlu stated adding that a consultation took place with the parties' leaders.

Çavuşoğlu visited the main opposition Republican People's Party (CHP) leader Kemal Kılıçdaroğlu and İP leader Meral Akşener to inform them of the Libya memorandum regarding the deployment of Turkish troops.

During the meetings, Çavuşoğlu elaborated why the memorandum was necessary, explaining the deals with Libya and the latest situation in the country.

Upon being asked if the minister was going to also visit the Nationalist Movement Party (MHP) Chairman Devlet Bahçeli, he said, “We did not go to the MHP. Chairman Devlet Bahçeli sent a message. ‘Our stance is obvious, we completely support the memorandum. Thus, you do not have to waste time coming to us, inform the other political parties’ it said.”

On the other side, the Turkish Republic of Northern Cyprus (TRNC) Prime Minister Ersin Tatar said Sunday that the cooperation between the Greek Cypriot administration and Khalifa Haftar, the self-declared field marshall of Libya's would-be army, is an unacceptable move.

"In order to usurp the rights of Turkey and the TRNC, the Greek Cypriots' cooperation with General Khalifa Haftar is an unacceptable position," Ersin Tatar said in a statement.

The militia loyal to Haftar, backed by a number of regional actors and international powers, has been waging war against the country’s U.N.-recognized Government of National Accord (GNA) led by Prime Minister Fayez al-Sarraj.

Tatar said the TRNC was closely following developments in the Eastern Mediterranean, adding that along with Turkey, the TRNC would be decisive in its moves to defend its national and strategic rights.

Referring to the visit Saturday to Greek Cyprus by Aguila Saleh Issa, a Haftar ally and president of the eastern Libyan House of Representatives in the city of Tobruk, Tatar said the move was anti-Turkish and showed the need for a profound reevaluation of the TRNC's foreign policy.

Turkey's Parliament earlier this month approved a security and military deal with the Tripoli-based GNA. The deal allows Turkey to provide military training and equipment at the request of the Libyan government, which controls the capital, and some of the country's west. The memorandum also asserts Turkey's rights in the Eastern Mediterranean in the face of unilateral drilling attempts by the Greek Cypriot administration, clarifying that the TRNC also has rights to resources in the area.

Greece, on the other hand, was angered by the agreement and responded by expelling the country's Libyan ambassador. Since then, Athens has established closer ties with Haftar. Greek Prime Minister Kyriakos Mitsotakis said the country would refer the case of the Turkey-Libya agreement to the International Court of Justice.

Greece wants to be included in U.N.-sponsored talks in January on the Libya conflict, Prime Minister Kyriakos Mitsotakis said Sunday.

"We do not want a source of instability in our neighborhood. Therefore we want a say in developments in Libya. We want to be part of the solution in Libya, as it concerns us too," Mitsotakis told Greek weekly To Vima in an interview.

The U.N. has said an international conference will be held next month in Berlin to pave the way for a political solution to Libya's ongoing conflict.