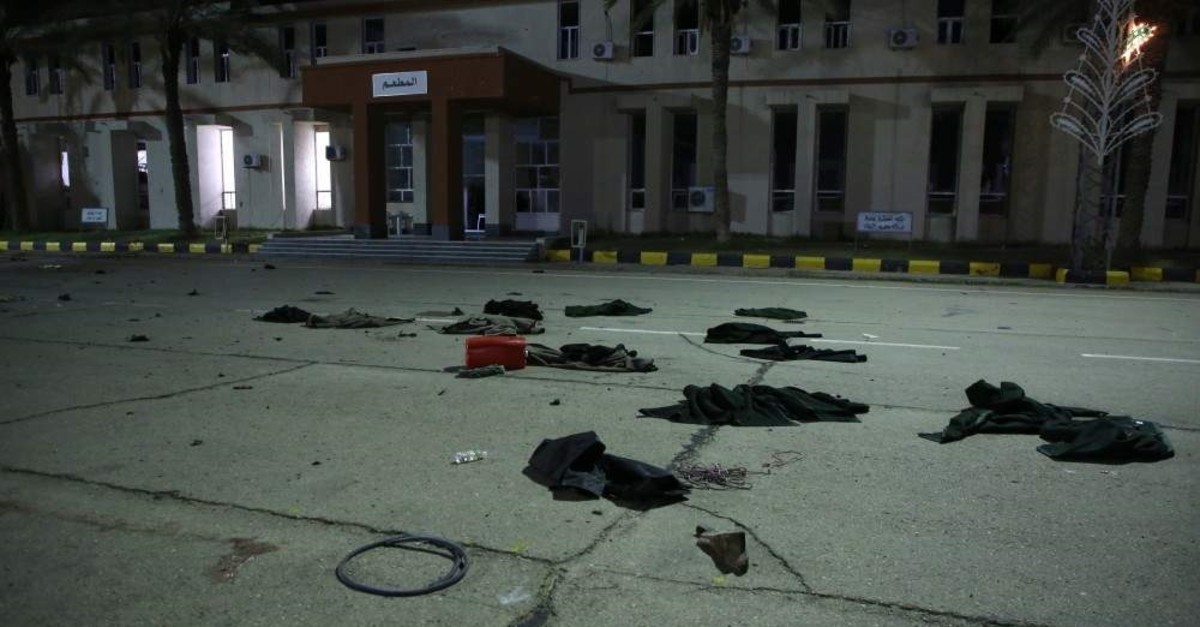 The Turkish foreign ministry condemned the deadly attack on a military school by pro-Haftar jets in Tripoli, while the U.N.-backed GNA said they retaliated against the attack

Turkey has strongly condemned an airstrike on a military school in the south of the Libyan capital of Tripoli, carried out by forces loyal to warlord Khalifa Haftar.

"It is essential for the international community to take the necessary steps as soon as possible to stop the attacks by Haftar's so-called Libyan National Army (LNA) and work out a cease-fire in Libya, as well as to put an end to external support provided to Haftar," the Foreign Ministry said in a statement.

Expressing condolences to the families of those killed and wishing a speedy recovery to the wounded, the ministry said Turkey will continue to pursue efforts in solidarity with the U.N.-recognized Government of National Accord (GNA).

Jets loyal to Haftar bombed a military school dormitory in southern Tripoli, according to the media office of the Burkan al-Ghadab (Volcano of Rage) operation. The operation was in response to Haftar's April offensive to capture Tripoli.

Fawzi Unayyis, the GNA spokesman for the Health Ministry, told Anadolu Agency that the airstrike targeted the school's dormitory. He warned that the death toll could increase as scores were left injured.

Forces aligned with the Tripoli-based GNA said they struck an airbase manned by loyalists of rival Haftar near Libya's border with Tunisia.

"The air bombardment of the base resulted in destroying military hardware and ammunition depots, and targeted gatherings of mercenaries," Colonel Mohammed Gnounou, a spokesman for GNA forces, told the DPA in a statement, without giving further details.

At least three military personnel were killed and five others injured in the strikes, a military source linked to Haftar's self-styled LNA said.

The same source claimed that the bombing had been carried out by Turkish drones.

"We have a strategic relationship with Turkey that serves the interests of the two countries," al-Mishri said, adding that most people in the country are in favor of Turkish military support.

Al-Mishri highlighted that Turkey has been supporting consensus since the start of the conflict and has established communication with all sides, but the pro-Egypt and United Arab Emirates (UAE) side did not want Ankara to play a role in the country.

"Right now we are facing a large coalition, so we had to find a partner who had political, economic, societal and historical ties with us," al-Mishri said, adding that Libya and Turkey have historically had favorable relations and they are confident that Ankara will defend their rights.

Criticizing the support from France, the UAE and Egypt for Haftar, al-Mishri said they are carrying out attacks against the legitimate government in Tripoli. They want the democratic process to end by providing military assistance for Haftar's forces, he said.

"Egypt wants to do what it did to Mohammed Morsi and bring Haftar [to power] through a coup but the Libyans rejected this," al-Mishri said.

Since the ouster of late leader Muammar Gaddafi in 2011, two seats of power have emerged in Libya: Haftar in eastern Libya supported mainly by Egypt and the UAE, and the GNA in the capital Tripoli, which enjoys U.N. and international recognition.

Libya's GNA recently made a formal request for Turkish military support in the "air, ground and sea" to help fend off an offensive by Gen. Haftar's forces, who are attempting to take control of the capital Tripoli. Turkey supports the U.N.-backed government against the militia and mercenaries of the latter self-proclaimed military chief.

Turkey's parliament passed a motion allowing the deployment of troops in Libya for one year in order to respond to threats from illegitimate armed groups and other terror groups targeting both countries' national interests.

Turkish forces will be able to launch an operation and [military] intervention to protect Turkey's interests and prevent future irreparable situations.