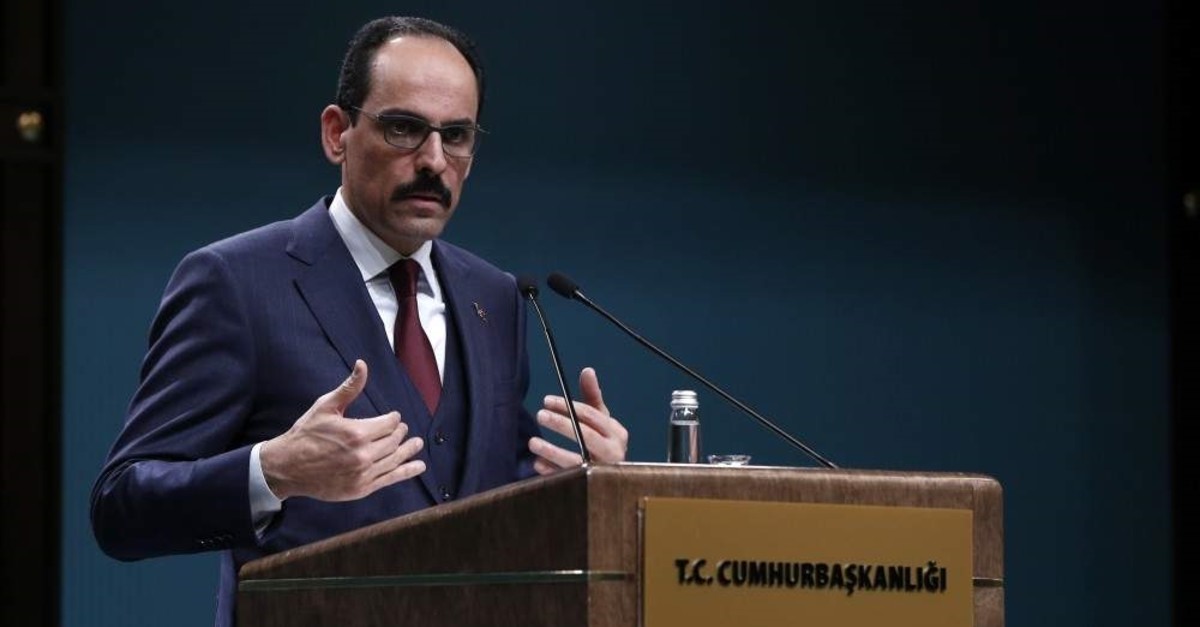 "Turkey is not looking to play the role of mediator in the U.S.-Iran row. Turkey is among a handful of countries that can talk to both the U.S. and Iran – and maybe the most important one," Kalın told reporters following a Cabinet meeting in the capital Ankara.

As tensions escalate in the Middle East with the latest developments between the U.S. and Iran, Turkey has urged de-escalation and expressed serious concern about the crisis.

Following the killing of Soleimani, the strain in relations between the decades-long foes immediately heightened with a string of harsh statements from both the U.S. and Iran, as well as other regional countries such as Iraq and Israel. Iran retaliated on Wednesday with a missile attack on two U.S. military bases in Iraq.

Indicating that President Recep Tayyip Erdoğan had started intense diplomatic efforts in the earliest moments following the attack, Kalın said that the president held talks with the heads of state of Germany, France, the U.K., the U.S. and Qatar.

"Our president's talks regarding the issue will continue in the following days," Kalın said.

Speaking on another regional crisis unfolding in the Mediterranean, Kalın said that Turkey's priority in Libya is an immediate end to clashes and the announcement of a cease-fire.

Last week, Turkish Parliament passed a motion allowing for the deployment of troops to Libya for one year in response to threats from illegitimate armed groups and other terror groups working against both countries' national interests.

Libya's Government of National Accord (GNA) recently made a formal request for "air, ground and sea" support from the Turkish military to help fend off an offensive from the forces of Haftar, who is trying desperately to take control of the capital, Tripoli. Turkey supports the U.N.-backed government against the militia and mercenaries of Haftar, the self-proclaimed military chief.

"I can say that the Turkish military is on the side of the official Libyan government and will continue to do so with military training, cooperation and technical equipment support. The questions of when and who will be sent in what capacity are projects to be realized after military institutions evaluate the situation and the approval of our president is received," Kalın added.

Kalın also stated that the upcoming Libya leader's summit in Berlin will be a platform for yielding possible results.

"Yet, as long as this process continues, it is obvious that tensions, conflict and attacks will deepen further and will render the process fragile," he said.

The Berlin conference on Libya is expected to convene in the German capital in January.

Russia, US must step up efforts in Syria

On the other hand, Turkey continues to take up efforts in northern Syria following Operation Peace Spring, which was launched on Oct. 9 to facilitate the safe return of Syrian refugees and clear Turkey's southeastern border from terrorists.

Explaining that peace and safety have prevailed thanks to the operation, Kalın reiterated that 360,000 refugees have returned to liberated areas.

"However, I'd like to express that the activities of terrorist organizations and especially the YPG continue here, and the U.S., who is their sponsor, has to show more effort. Similarly, there are a series of responsibilities falling on the Russian side in regions such as Qamishli, Hasakah and Kobani, or Ayn al-Arab, under Russian control. On this occasion, we would like to remind of that," Kalın underlined.

He added that Turkey's position regarding the Assad regime is obvious and that Ankara is of the opinion that Assad has lost his ability as a leader that can carry Syria into a democratic, pluralist and peaceful future.

On Oct. 22, Ankara and Moscow reached a deal under which YPG/PKK terrorists were to pull back 30 kilometers south of Turkey's border with Syria within 150 hours, and security forces from Turkey and Russia would mount joint patrols there. Yet, since the deal was struck, YPG attacks have continued to be a threat in the region and the given promises have not been not upheld.

While the U.S. moved its forces from northern Syria to the country's oil-rich regions, Russia has settled into the three bases left by the U.S. and has expanded the point in Qamishli Airport.
RELATED TOPICS