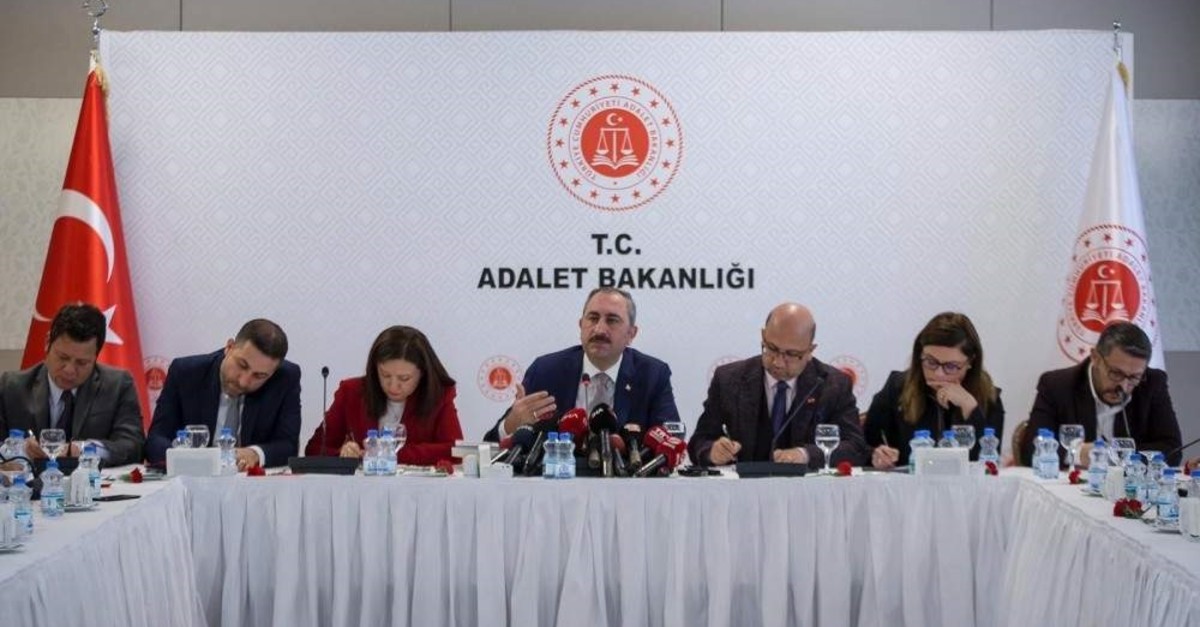 Indicating that Turkey took great steps regarding the judiciary in recent years, Justice Minister Abdulhamit Gül stated that reformers are working on a new Human Rights Action Plan in the new year. Gül noted that the European Court of Human Rights (ECtHR) closed 730 files on Turkey as of 2019, highlighting that the number of infringements decreased from 140 in 2018 to 96 in 2019.

"This number fell from 53 to 15 in the right for a fair trial, from 29 to nine regarding freedom and security including detention, and from 11 to two regarding the right to form an association and meetings. Again, 732 files on our country were closed at the ECtHR. The number of pending files, on the other hand, has fallen to 680, which is the lowest rate so far. These numbers are the best and most objective answer to international criticisms," Gül said, adding that it is "impossible" to say that judicial reforms only benefited certain people in Turkey. "The old Turkey has been left behind. Approaches according to (wearing) headscarves or the thoughts or sects of people, and refusing and objecting to policies and applications were left behind in the old Turkey. From now on, nobody will be able to turn Turkey into that old prohibitive Turkey," Gül said.

'Turkey has never stepped outside law in international arena'

The justice minister, who joined Ankara media representatives for a breakfast, stated that Turkey has entered the new year with new hopes, but the tensions in the region have evoked concern. "We have no tolerance toward more blood and pain. In this framework, we hope that these problems can be prevented from turning into a greater conflict by leaving diplomatic channels open," he continued.

Indicating that Turkey will continue its strong performance in 2020 regarding the EU harmonization process, Gül said, "On the other hand, we expect the EU also to show empathy and break down prejudices toward Turkey."

Saying that not only Turkey but also the EU will go through a test of sincerity in 2020, Gül added that Turkey has a strong determination in performing the last six criteria of the 72 for the EU visa exemption agreement. Turkey has been preparing to make the necessary reforms to meet the criteria imposed by the European Union to provide visa liberalization for its citizens. Turkey has so far fulfilled 66 out of the 72 necessary criteria for enabling Turkish citizens to have visa-free access to the EU. Following Parliament opening on Oct. 1, Ankara will launch a new initiative to take necessary measures for fulfilling the remaining six criteria. During the meeting of the Reform Action Group chaired by President Recep Tayyip Erdoğan on May 9, Erdoğan instructed the working group that the necessary steps to meet the remaining six criteria for visa liberalization be taken immediately.

Technocrats working on the issue have made significant progress to be ready for fresh negotiations with the EU on the remaining criteria.

The remaining six criteria include an anti-terror regulation, the European Union Agency for Law Enforcement Cooperation (Europol), the Group of States against Corruption (GRECO), cooperation in the extradition of criminals, protection of personal data and a readmission agreement.

Wikipedia ban to be lifted after justified decision

Six out of 10 members of the Constitutional Court said the Wikipedia ban amounts to a violation of the freedom of expression.

The court's ruling overturns a previous decision saying that the ban was appropriate as the website failed to remove content "unfairly attacking" Turkey and "harming the reputation of the country."

The First Criminal Court of Peace said the ban, which has been in place since April 26, 2017, was in line with Turkish laws and the European Charter of Human Rights that call for restrictions to freedom of expression to prevent crimes.

"The content subject to the ban unfairly attacked Turkey by claiming it supported terrorism," the ruling said, noting that an overall ban of Wikipedia was required as it was not technically possible to block only the false content.

Gül, who stressed that the purgation of Gülenist Terror Group (FETÖ) is vital for the people's independence and sovereignty, said: "We pursue this struggle making no concessions. Two hundred seventy-two of 289 de facto coup cases have been concluded. The hearing of 17 cases continues." Gül, underlining that sentencing all people involved in FETÖ with the same level of punishment would trivialize the fight, Gül said: "This would benefit FETÖ mostly. As you know, this crypto organization has risked that thousands of innocent people would be branded in order for this fight to be trivialized."