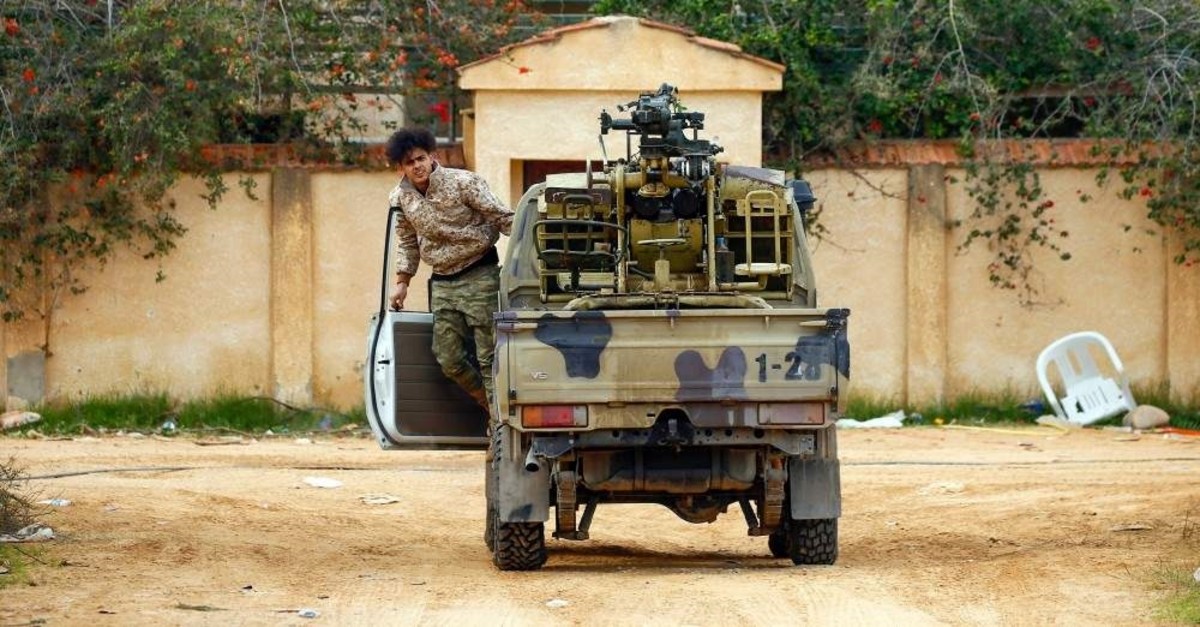 A fighter loyal to Libya's internationally recognized Government of National Accord (GNA) exits a vehicle in an area south of Tripoli, Libya, Jan. 12, 2020.(AFP Photo)
by Compiled from Wire Services Jan 13, 2020 8:30 am

Both sides in Libya's conflict are expected Monday in Moscow to sign an agreement on the terms of a cease-fire that went into effect over the weekend, ending nine months of fighting after weeks of international diplomacy.

The truce comes after a diplomatic offensive, led by Ankara and Moscow, which have established themselves as key players in Libya.

Ankara dispatched troops — in a training capacity, it said — to the U.N.-recognized Government of National Accord in January. And Russia has been accused of backing forces loyal to Libyan warlord Khalifa Haftar, which are supported by France, the United Arab Emirates, Saudi Arabia and Egypt.

Libya's head of High Council of State Khaled al-Mechri said the signing of the agreement in Moscow would pave the way for the revival of the political process.
The head of the U.N.-recognized government, Fayez al-Sarraj, and Haftar are both expected to head their respective delegation.

"Fayez al-Sarraj and Haftar will separately meet with Russian officials and a Turkish delegation cooperating with Russia," said Lev Dengov, the head of the Russian contact group on the intra-Libyan settlement, speaking to Russian state news agency Ria Novosti.
Al-Sarraj said Monday his government has accepted the cease-fire deal with renegade commander Khalifa Haftar to prevent more bloodshed in the country.

"We will not ignore the sacrifices of our sons and martyrs or our dream for a civil state," al-Sarraj said in an interview with the private Alahrar TV channel.

"Our acceptance of the cease-fire comes from a position of strength to maintain national and social cohesion," he said.

Al-Sarraj said his government forces, however, are ready "to resume military operations in case of any break to the cease-fire."

Turkish Foreign Minister Mevlüt Çavuşoğu and Defense Minister Hulusi Akar are also expected to arrive in Moscow on Monday.
Libya and Turkey signed agreements in November outlining cooperation in terms of security and maritime affairs, angering Mediterranean countries, including Greece and the Greek Cypriot administration, of whom the diplomatic maneuver prevents from unilaterally exploiting energy resources in the region.
"Representatives from the United Arab Emirates and Egypt will most likely be attending the meetings as observers," Dengov said.

The GNA and forces loyal to Haftar accepted a joint call by Turkey and Russia for a cease-fire late Saturday.

The cease-fire took effect at midnight local time (2200GMT) and the decision was celebrated with fireworks in Tripoli.

"During the meetings, resolution of the Libyan crisis will be discussed, and the possibility of signing a cease-fire agreement and details of such a deal will be negotiated," Dengov added.

Haftar will be accompanied by parliament speaker Aguila Salah, while Sarraj will go with speaker Mechri.

Sarraj on Monday called on Libyans to "turn the page on the past, reject discord and to close ranks to move towards stability and peace."

His comments came after a cease-fire began in line with a joint call by President Recep Tayyip Erdoğan and his Russian counterpart Vladimir Putin.

Since the start of the offensive against Tripoli, more than 280 civilians and about 2,000 fighters have been killed and 146,000 Libyans displaced, according to the U.N.