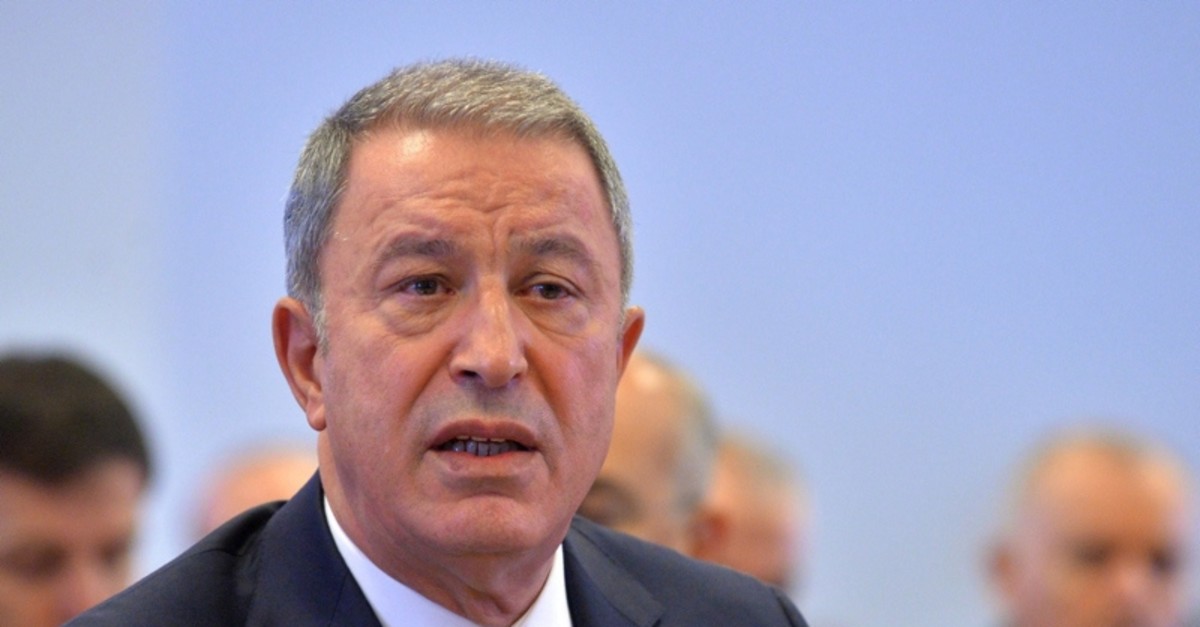 Turkey strives to end the violence in both Idlib and Libya with a political solution, Defense Minister Hulusi Akar said Wednesday.

"Libya is our neighbor through the sea and it is out of question to remain indifferent while countries that are not neighbors, such as the United Arab Emirates and Saudi Arabia, are there. We take the United Nations as a reference; therefore, the question as to why we are there is meaningless," Akar said during a meeting with journalists in Ankara.

Regarding the recent cease-fire attempt between Gen. Khalifa Haftar and the U.N.-recognized Government of National Accord (GNA) which ended with Haftar stalling the process and leaving without signing the agreement, Akar said, "Our respondent is Russia, we wait for the outcome."

"We do not think other forces will want to face off against the Turkish forces in the field in Libya. It would be premature to say that the cease-fire in Libya has collapsed. An extensive conference will take place in Berlin, and many leaders will attempt it, except for (U.S. President Donald) Trump. These include Haftar and (GNA Prime Minister) Fayez al-Sarraj. Our Libyan brothers (the official government and the groups it represents) are determined to establish a political process and cease-fire in their country," Akar elaborated, indicating that there were some whisperings in Haftar's ear from those who were disturbed by Turkey and Russia's central role in the process in the Libyan crisis.

Akar also discussed the tensions between the U.S. and Iran that are playing out in Iraq. "Yesterday another rocket attack took place (in Iraq)," he said. "We call on both sides to act with sense. We expect that the pressure of public opinion and emotional responses will give way to calm. Iraq also does not wish for a conflict between the U.S. and Iran," Akar said, adding that Turkey is communicating with all sides and that stability in Iraq is in Turkey's best interests.

"We frequently tell them regarding the fight against terrorism that terrorists mainly from the PKK are continuing their presence in Sinjar, Qandil and Makhmur, that Turkey is not eying any other country's territory but that the PKK has been harassing our people and nation from that area for 40 years and that we will continue our fight until the last terrorist is eliminated and their caves are destroyed," Akar said.

Regarding the agreements Turkey signed with the U.S. and Russia, Akar said that the intended outcomes of those had not been seen in the field and that the YPG continues its terrorist activities.

"Normalization has begun in the Operation Peace Spring area. If harassment continues and meetings with our interlocutors remain without conclusion, we will look for a plan B. Even though there is no terrorist presence in the area, we face suicide and bomb attacks," Akar said, continuing to explain that Turkey is working to open the schools in the region, while also providing for all kinds of needs of civilians, including food and health care.

The minister further pointed out that 150,000 Syrians have returned to the operation area.

"Gallup poll has carried out a survey in Hasakah and Raqqa. More than half of the people there support our presence and our armed forces there. The terrorists' propaganda is ineffective there," Akar stated.