Haftar seeks support in Greece ahead of Berlin conference 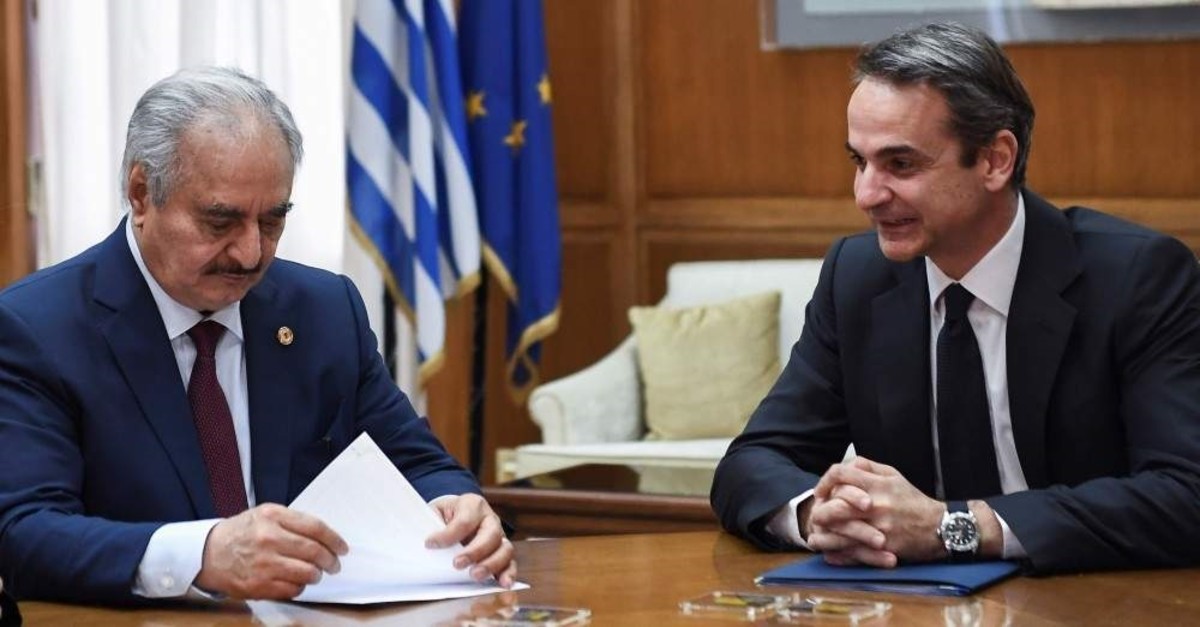 Putschist Gen. Khalifa Haftar, commander of Libya's eastern-based forces, on Friday visited Greece to seek support just two days before the Berlin conference on the Libya conflict, which he and the head of Tripoli's U.N.-recognized Government of National Accord (GNA) Fayez al-Sarraj are expected to attend.

His visit came as world powers step up efforts for a lasting cease-fire, nine months after an assault on Tripoli by Haftar's forces sparked fighting that has killed more than 280 civilians and 2,000 fighters and displaced tens of thousands.

Haftar flew to Athens on a surprise visit Thursday, with Greece seeking to build ties with Haftar after the legitimate government in Libya signed a maritime and military cooperation deal with Turkey in November.

Athens is vehemently opposed to Turkey's maritime deal with Libya, which claims much of the Mediterranean for energy exploration, conflicting with rival claims by Greece and the Greek Cypriot administration.

Speaking to Daily Sabah, Foreign Minister Mevlüt Çavuşoğlu said Friday that the memorandum of understanding on the delimitation of maritime jurisdiction areas that Turkey signed with the legitimate government of Libya extended the scope of bilateral cooperation with Libya.

"To this end, we constantly invite all parties in the region, except the Greek Cypriot administration, to reach a comprehensive solution for maritime boundary delimitation. There haven't been any changes in our position in this regard. Our constructive approach to turn the Eastern Mediterranean into a sea of stability rather than of tension will continue," he added.

Haftar met with Greek Foreign Minister Nikos Dendias after his arrival on Thursday and they held more talks on Friday. He later met with Prime Minister Kyriakos Mitsotakis.

Greece is seeking to take part in the Berlin talks but has yet to be invited.

Mitsotakis said Thursday that Athens was very disappointed not to have been invited to the international summit on Libya.

"It was wrong that we were not invited," Mitsotakis said. "We have sea borders with Libya and should have been at Berlin."

On Jan. 12, the warring sides of the Libyan conflict announced a cease-fire in response to a joint call by Turkish President Recep Tayyip Erdoğan and Russian President Vladimir Putin.

Libya's GNA on Thursday reiterated that forces loyal to putschist general Haftar keep violating the cease-fire in the country.

Haftar agreed "in principle" Thursday to attend the peace conference in Berlin after Sarraj signaled he would be present.

Sarraj told officials in Tripoli that "we are going to be present in Berlin" for the talks, according to a statement Thursday.

Haftar had walked away from cease-fire talks in Moscow on Monday, but German Foreign Minister Heiko Maas visited his eastern Libya stronghold of Benghazi on Thursday to persuade him to join the conference.

Haftar "wants to contribute to the success of the Libyan conference in Berlin and is in principle ready to participate in it," Maas tweeted, calling it "the best chance in a long time" for peace. Haftar "has agreed to abide by the ongoing cease-fire," he added.

Germany seeks to bring conflicting parties and countries concerned with the Libyan issue to the Berlin conference in an attempt to reach a permanent cease-fire and to pave the way for a political solution to the conflict.

But Sarraj, whose GNA did sign the Moscow deal, cast doubt over Haftar's intentions. He said Haftar's failure to sign the cease-fire deal was "an attempt to undermine the Berlin conference before it starts."

Erdoğan also said Friday that Haftar is not "trustworthy," as his forces continued on Thursday to bomb Tripoli.

The oil-rich North African state has been in turmoil since a 2011 NATO-backed uprising that overthrew and killed dictator Moammar Gadhafi, and multiple foreign powers have become embroiled.

On Thursday, Mitsotakis threatened that Greece will block any European peace deal on Libya unless an agreement between the internationally recognized government in Tripoli and Turkey on maritime borders is scrapped.

Mitsotakis' comments during a TV interview came a day before his scheduled talks with Haftar, whose forces are battling the Tripoli government.

Mitsotakis described the Turkish-Libyan deal as "unacceptable and illegal" in his interview on private Alpha TV, adding that he has conveyed his intentions on blocking a potential peace deal to senior European officials.

"Greece, at the level of a (European Union) summit meeting, will never accept any political solution on Libya that does not include as a precondition the annulment of this agreement," he said.

"To put it simply, we will use our veto even before the matter reaches the summit, at the level of (EU) foreign ministers," he said.

Relations between regional rivals Greece and Turkey have deteriorated considerably in recent months over undersea exploration and drilling rights in the Aegean Sea, off Cyprus, and in areas off the southern Greek island of Crete that are included in the Turkish-Libyan agreement.

Ankara raised the stakes with moves to explore waters controlled by Greece and fellow EU-member Greek Cyprus administration, including sending drillships into waters where the Greek side claims exclusive economic rights.

Another comment about the tension in Libya came from German Chancellor Angela Merkel on Thursday, as she called for a weapons embargo on Libya to facilitate a political solution to the conflict.

Speaking at a news conference in Berlin, Merkel welcomed Haftar's promise to respect the existing cease-fire and his acceptance of an invitation to the Berlin conference.

"First of all, it is good news that he is ready to observe the cease-fire," she said, stressing that it was one of the requirements for the success of the Berlin conference.

The chancellor called for a new commitment from the conflict parties to respect the U.N. arms embargo on Libya.

"At the Libya conference, we must achieve above all that the weapons embargo will be implemented ... It was already agreed within the U.N. framework, but so far not adhered to," she said.

Meanwhile, Putin confirmed his participation in the Berlin conference. "On January 19 Russian President Vladimir Putin will visit Berlin to take part in the International conference on Libya," the Kremlin said.

Earlier in the day, Russian Foreign Minister Sergey Lavrov said he expects the talks to be difficult, and characterized the relations between the warring sides as "very tense," adding that efforts of many countries are needed to persuade them to start a political dialogue.

"The more countries that take part (in peace efforts on Libya), the better. It is not easy to persuade these people, we have to unite our powers. The relations are very tense, they don't even want to be in the same room, let alone speaking to each other," Lavrov said.

Lavrov praised the cease-fire that the Libyan sides declared on Jan.12, as "a certain step forward" in the Libyan settlement.

The final document for the Berlin meeting is almost agreed on, he said, urging both sides to avoid setting additional conditions after the end of the conference.

A U.S. official said that Pompeo would call for the withdrawal of all foreign forces from the war-ravaged nation and a resumption of the U.N.-backed peace process – but that the first priority was preserving a fragile truce.

"The imperative would be the continuation of the cease-fire," the official told reporters on condition of anonymity.

The United States backed the European-driven military campaign on behalf of rebels that toppled Gadhafi in 2011 but more recently has played a low-key role.

The United States officially backs the GNA but maintains contacts with Haftar, whom President Donald Trump praised after a telephone call last year.

The U.S. official also declined to comment on Greece's exclusion, saying the decision was up to Germany.