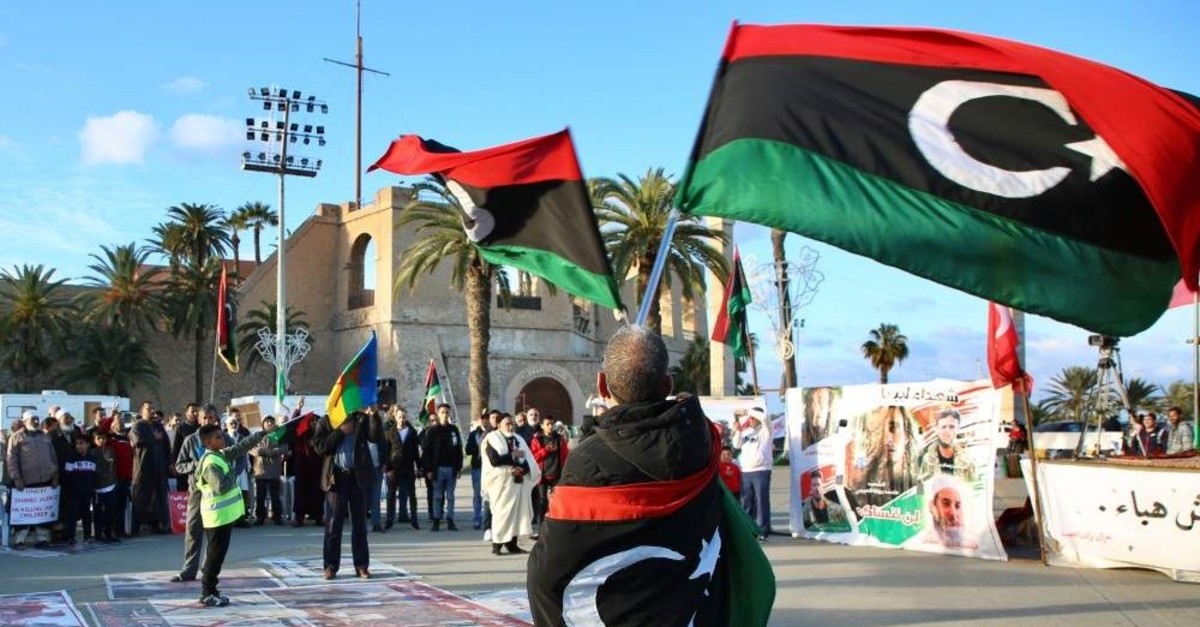 A protester waves Libyan flags at a rally to protest attacks by forces linked to putschist Gen. Khalifa Haftar in Tripoli, on Jan. 17, 2020. (AA Photo)
by Daily Sabah with Agencies Jan 18, 2020 1:34 pm

With the peaceful resolution of the Libyan crisis on the agenda for a second time this week, President Recep Tayyip Erdoğan said Saturday that Turkey is key to peace in the war-weary country, warning Europe of the threat of an escalation in the conflict.
Erdoğan's remarks came ahead of Sunday’s Berlin conference on Libya in an article he penned for U.S.-based Politico website titled "The road to peace in Libya goes through Turkey."
"It would be a mistake of historic proportions to leave Libya at the mercy of a warlord,” Erdoğan said, referring to the leader of eastern Libyan forces, putschist Gen. Khalifa Haftar.
Erdoğan warned Europe that it could face new threats if it fails to back Libya’s U.N.-recognized government, the Government of National Accord (GNA).
"EU’s potential failure to adequately support Libya’s Government of National Accord (GNA) would be a betrayal of its own core values, including democracy and human rights,” Erdoğan said.
''Moreover, Europe would encounter a fresh set of problems and threats if Libya’s legitimate government were to fall,'' he added. Erdoğan went on the say: "The obvious choice for Europe is to work with Turkey” as it is not much interested in providing military support to Libya.
President Erdoğan is expected to hold a meeting with Russian President Vladimir Putin ahead of the Berlin conference.
Turkey will train Libya’s security forces and help them fight terrorism, human trafficking and other grave threats against global security, he added.
If Libya's legitimate government were to fall, Erdoğan said terrorist groups such as Daesh and al-Qaida "will find a fertile ground to get back on their feet."
Meanwhile, ahead of his departure for Berlin the president also criticized the international community for failing to take action against Haftar’s violations of international law and U.N. Security Council resolutions.
He noted that Berlin talks “will be an important step” to ensure Libya cease-fire, as he criticized Greece for supporting the wrong side in the conflict.
“Greece is extremely disturbed about not being invited to Libya talks in Berlin; Greek Prime Minister Mitsotakis is supporting the wrong side in the conflict,” Erdoğan said, noting that the country had been upset by the maritime pact between Turkey and Libya. The president continued by saying that Mitsotakis adopted a revanchist approach following the deal and has been taking the wrong steps in response to the maritime pact. He also criticized Greece for inviting Khaftar, saying that his visit to Athens has no meaning for Turkey.
On Jan. 12, the warring sides of the Libyan conflict announced a cease-fire in response to a joint call by Turkish and Russian leaders, although further talks came to no avail on Monday after Libyan warlord Khalifa Haftar left Moscow without signing the deal.
Germany is set to host a major peace conference on Libya that will seek a stronger commitment from regional actors for a cease-fire in the war-torn country to pave the way for a political solution.
The draft text envisages the establishment of technical committees to monitor the cease-fire, while it also urges the re-implementation of and arms embargo, diplomatic sources told Turkish broadcaster NTV. Additionally, it also calls on the formation of a national government and hold delayed polls, without specifying a date.
Stressing that the EU needed to show the world that it is "a relevant actor in the international arena,” Erdoğan said: "The upcoming peace conference in Berlin is a very significant step toward that goal.”
Chancellor Angela Merkel invited leaders from Turkey, Russia, the U.S., China, France, the U.K. and other regional actors for a one-day conference in Berlin, amid a fragile cease-fire between Libya’s internationally recognized government and forces loyal to Haftar.
At the meeting, Germany and the U.N. will push rival Libyan camps fighting over the capital, Tripoli, to agree to a truce and monitoring mechanism as first steps towards peace, diplomats and a draft communique said.
Sunday's summit will put pressure on Haftar and the LNA to halt a nine-month offensive against Tripoli after a week-long lull in fighting. But it will not attempt to broker a power-sharing deal between the two sides, said diplomats briefed on preparations.
Since the ouster of late ruler Muammar Ghaddafi in 2011, two seats of power have emerged in Libya: one in eastern Libya supported mainly by Egypt and the UAE, and the other in Tripoli, which enjoys the U.N. and international recognition.
The GNA led by Fayez al-Sarraj has been under attack since April from Haftar's forces, with fighting killing over 280 civilians and 2,000 fighters.