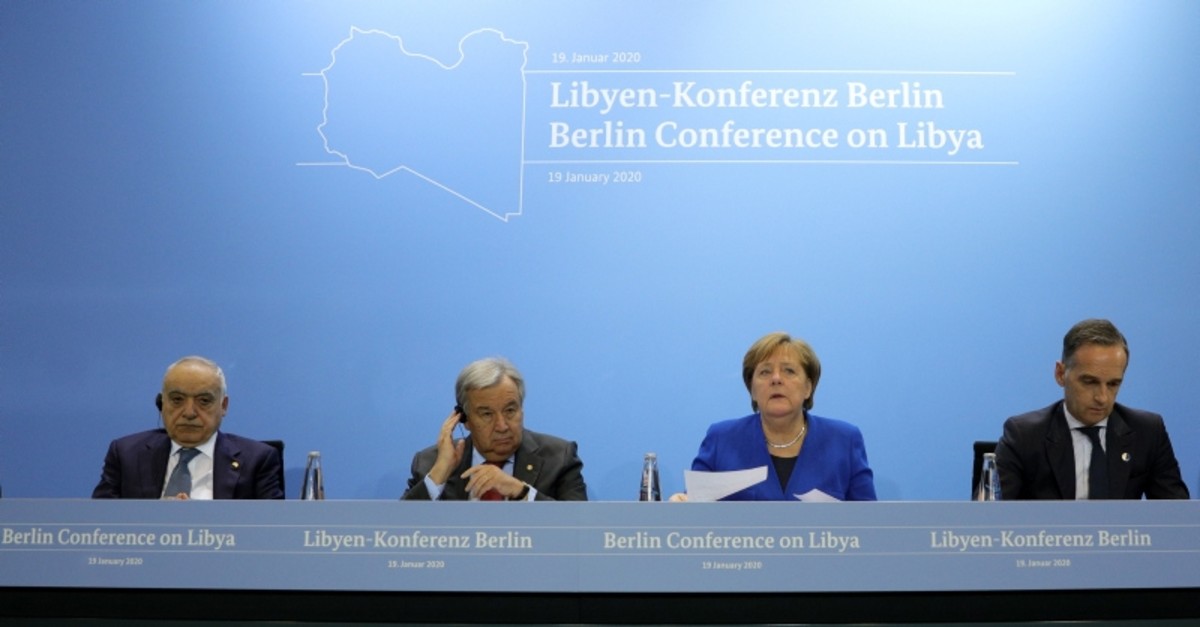 Participants of the Berlin conference on the crisis in Libya have agreed to uphold a U.N. arms embargo and end military support for warring factions.

"We have received commitments from all of the participants not to give any further support to these warring parties so that the U.N. arms embargo is respected and the truce holds," German Chancellor Angela Merkel said at a news conference following the conclusion of the conference on Sunday. She said the leaders had agreed upon a detailed plan for the country. Sources said that the agreement was not officially signed by the parties, but verbally agreed upon.

Merkel also noted that Turkey said it will not send additional weaponry or ammunition to Libya during this process.

U.N. Secretary-General Antonio Guterres said at the news conference that there can be no military solution in Libya, adding that all parties pledged not to intervene militarily in the country.

"First, we must have a cease-fire. All parties today committed to supporting the cease-fire," Guterres said. "Second, we must have monitoring," he continued, stressing that the monitoring should involve several international organizations and must be accepted by the factions in the conflict.

He said a military committee of delegates from putschist Gen. Khalifa Haftar's forces and the U.N.-recognized Government of National Accord (GNA) would convene in Geneva in the next few days to continue negotiations.

Merkel clarified that Haftar and GNA Prime Minister Fayez al-Sarraj were not in the same room during the talks in Berlin, but were spoken to separately. They did not directly participate in the conference, she said.

"We, the participants, note the Co-Chair's statement on the political, security and humanitarian situation in Libya of the meeting at Foreign Ministers' level convened by France and Italy on the margins of the 74th General Assembly of the UN in New York on 26 September 2019. We reaffirm our strong commitment to the sovereignty, independence, territorial integrity and national unity of Libya. Only a Libyan-led and Libyan owned political process can end the conflict and bring lasting peace," a press release said after the conference.

"We commit to refraining from interference in the armed conflict or in the internal affairs of Libya and urge all international actors to do the same. We recognize the central role of the United Nations to facilitate an inclusive intra-Libyan political and reconciliation process," the press release added. "We welcome the marked reduction in violence since January 12th and the negotiations undertaken in Moscow on January 13th as well as all other international initiatives aimed at paving the way towards a cease-fire agreement," the participant countries added in the press release regarding the cease-fire. "We call on all parties concerned to redouble their efforts for a sustained suspension of hostilities, de- escalation and a permanent cease-fire."

More than 280 civilians and 2,000 fighters have been killed since the beginning of putschist Gen. Haftar's assault on Tripoli, according to the United Nations. The fighting has displaced some 146,000 people, with the ongoing violence threatening to plunge Libya into violent chaos to rival the 2011 conflict that led to the ousting and murder of longtime dictator Moammar Gadhafi.

Ankara is joined by Italy and Qatar in supporting Prime Minister Sarraj's legitimate government in Tripoli. Meanwhile, the rival force based in the east is supported by France, Russia, Jordan and the United Arab Emirates, alongside other key Arab countries.