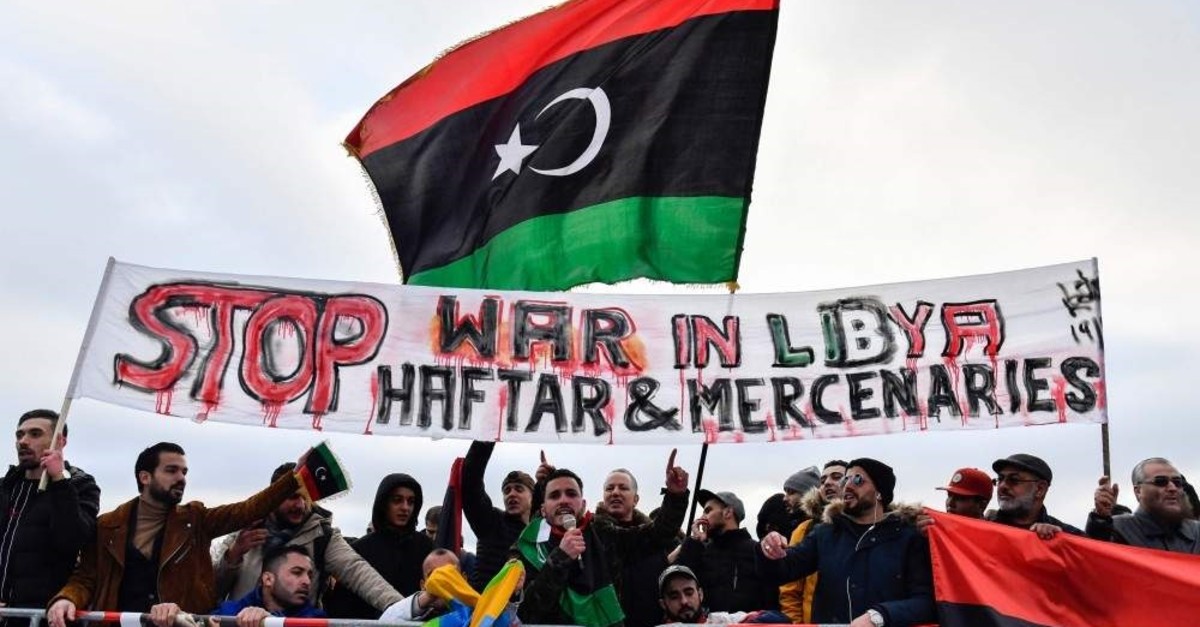 After nine months of escalating conflict, the international community has finally taken a stance on the Libyan crisis, convening multiple leaders and regional actors at a meeting in Berlin Sunday.

The summit saw Turkey, which has been exerting strenuous efforts to highlight the issue for much of the last year, maintaining its strong stance with an emphasis on humanitarian needs. Furthermore, other nations, namely France, the United Arab Emirates and Egypt, showed a shift in stance during the summit, displaying a sudden care for the needs of the Libyan people. According to experts, however, despite the move ostensibly representing a sharp turnaround in these countries' approach to Libya, the shift is merely cosmetic.

"This is only the icing of the cake," said Mehmet Şahin, a professor and political scientist, adding that behind the curtains, these countries still maintain their old habits and would offer support to putschist Gen. Khalifa Haftar's aggressive stance in Libya.

After the meeting, a list of concluding remarks were released with the implication of the countries in attendance having agreed on the points outlined.

"We commit to refraining from interference in the armed conflict or in the internal affairs of Libya and urge all international actors to do the same," read Article 6, while Article 9 confirmed that all concerned parties would welcome a cease-fire deal brokered by Turkey and Russia that was supposed to have been implemented on Jan. 12.

Meanwhile, Article 12 called "for a comprehensive process of demobilization and disarmament of armed groups and militias in Libya," while Article 16 called on the U.N. to impose "appropriate sanctions on those who are found to be in violation of the cease-fire arrangements and on Member States to enforce these." Article 26, on the other hand, urged all Libyan parties to resume "the inclusive Libyan-led and Libyan-owned political process."

However, these articles missed one crucial point: the fact that a cease-fire had already been brokered and violated by one of the representatives at the table, Haftar, and its backers, who were also present in the meeting, with the efforts of states like Turkey and Russia to reach a deal having been entirely overlooked.

It is also crucial to realize that none of these concluding articles were signed by a participant country and were only accepted verbally. The effectiveness of such an agreement showed its fruits immediately.

"The UAE and France have a hypocritical policy. They accepted the 2015 Libya treaty and publically declared their support for a political solution back then. They even claimed that they saw the GNA (Government of National Accord) as a legitimate actor in Libya. However, they continue to illegally support Haftar's forces in every possible way," said Emrah Kekili, a Libya expert and researcher at SETA Foundation, underlining that due to these reasons, he approaches the countries' professed stance in Berlin summit with caution.

The UAE's minister of state for foreign affairs, Anwar Gargash, tweeted Sunday night that the UAE supported efforts by the Berlin conference to seek a political solution to the crisis in the country, adding in a separate tweet that the marginalization of the Arab role in Libya that occurred in the case of Syria would not be repeated in Libya. However, Haftar's forces continued their assaults just as the meeting was ended, violating the summit's entire premise.

The sound of explosions could be heard in the capital Tripoli immediately after the Berlin summit.

Abdul-Malik al-Madani, spokesman for the Burkan al-Ghadab (Volcano of Rage) Operation by Libya's U.N.-recognized government, told Anadolu Agency that the militias violated the cease-fire by launching a random mortar attack on the Salah al-Din region south of Tripoli.

While warring parties in Libya and the international community gathered in Berlin, Haftar's forces launched mortar attacks on al-Halatat over the course of the day.

Periodic bouts of gunfire could be heard and black smoke could be seen south of the Libyan capital. More than 280 civilians and 2,000 fighters have been killed since the beginning of putschist Gen. Haftar's assault on Tripoli, according to the United Nations.

"This (Berlin summit) is just a beginning," said Şahin, adding that how the result of the summit would be reflected on the ground would be clear in the upcoming period.

Şahin also expressed that he is not very hopeful in terms of the future of Libya given the lack of certainty implied in the concluding remarks.

"Turkey has had a central role in Libya," Kekili said, highlighting the constructive attitude of the country in the process.

In Kekili's opinion, the Libyan process has only turned into a positive one thanks to Turkey's efforts.

"Previously, Haftar was expected to capture Tripoli with the support of the UAE and Egypt. Thus, the summit in Berlin was expected to become the scene of Haftar's moves having become a fait accompli and even being accepted by the international community. However, Turkey's efforts have forced the international community to consider a political solution as an important option to be reconsidered and changed the course of events," Kekili said.

According to Şahin, Turkey and Russia have had a huge share in the organizing of the Berlin summit, to the point that without the two's involvement, there may not have been a summit at all.

"The reason why (Turkey and Russia had a huge role in the summit) was the fact that Haftar had violated a 2015 Libya deal (that was brokered by U.N.) and only two countries took initiative on the issue: Turkey and Russia," Şahin explained.

"With these two being involved, the EU had to take part as well," he continued.

The first statement from Turkey following the meeting came from the country's presidential spokesman on Monday. Turkey has been one of the key actors in the Berlin process for peace in Libya thanks to President Recep Tayyip Erdoğan's "effective and multidimensional diplomacy," İbrahim Kalın said on Twitter.

"The Berlin Conference on Libya presents an opportunity for the political process to move forward," he continued.

He also stressed that Turkey would maintain its "constructive and peaceful policy" against the proxy wars. "Proxy wars and shadowy games will not bring peace, security or prosperity to Libya. They must come to an end," he said, adding: "Turkey will continue to support the people of Libya."

"It is clear that we have not yet succeeded in launching a serious and stable dialogue between them," Lavrov told reporters after the conference, where Haftar and Sarraj did not meet face to face.

Still, for many, it is better late than never that certain steps have been taken on the issue, especially on the part of the EU.

"Ensuring that a cease-fire is immediately respected is simply not easy to guarantee," said summit host German Chancellor Angela Merkel following the meeting.

"But I hope that through today's conference, we have a chance the truce will hold further," she added.

U.S. Secretary of State Mike Pompeo also acknowledged that there were "still some questions on how well and effectively" the commitments can be monitored.

But, he said he was "optimistic that there will be less violence and ... an opportunity to begin the conversation that (U.N. special envoy) Ghassan Salame has been trying to get going between the Libyan parties."

U.N. chief Antonio Guterres, on the other hand, said that the world powers had made "a strong commitment to stop" the conflict escalating into a regional confrontation.

"Another reason why this summit was organized in the first place was the fact that Turkey's maritime deal with Libya had a game-changing effect, both in Libya itself and the Eastern Mediterranean," Şahin said, adding that the process was crucial on the way to the summit. The fact that Libya is an oil-rich country also has a major influence in Eastern Mediterranean politics, Şahin stated.

In Şahin's opinion, overlooked is the fact that a major concern for the European countries leading them to take action on the issue was the possibility of a fresh refugee crisis seeing an outpouring of irregular migrants leaving Libya for Europe. "These affect the EU directly. It would not be possible for them not to intervene," he said.

Libya is one of the main departure points for African migrants fleeing poverty and war to try to reach Italy by boat; however, the Libyan Coast Guard, supported by the European Union, has managed to pick up and bring the migrants back. Some 6,000 migrants are being held in government-run detention centers in inhumane conditions, according to human rights groups and the United Nations.

Meanwhile, EU foreign ministers met Monday to discuss the bloc's role in implementing a peace process for Libya, with several invoking the option of relaunching a naval mission that was suspended last year amid a fierce migration debate.

Before the meeting, the EU's top diplomat Josep Borrell said: "A cease-fire requires someone to take care of it. You cannot say, 'this is a ceasefire' and forget about it ... Someone has to monitor it, to manage it."

"We will reflect on how to best contribute to the monitoring of the cease-fire and the respect of the arms embargo," he added.

Borrell also added that EU states will need to take on active roles in Libya to achieve stability and help get its oil flowing again, amid Libya's oil output plunging to its lowest level since 2011 this week after Haftar began a blockade of several ports.

The divisions in Libya are over control of power and wealth, in a country where wealth is derived almost exclusively from oil revenues. As the Tripoli offensive goes on, this source of income will likely become a crucial part of it. Libya's oil reserves are estimated at 48 billion barrels, the largest in Africa and the ninth-largest in the world. Its recoverable reserves of shale oil are estimated at 26 billion barrels. Libya generates 90% of its revenue from oil, and any major disruption means a sharp decline in income.

Revenue from oil exports, however, still flows into the Central Bank of Libya in Tripoli, which works alongside the GNA. The National Oil Corporation (NOC), which dominates the country's oil sector, has tried to stay out of political conflicts and maintain a neutral perspective in the conflict. Adding to the complications of Libya's conflict dynamics, the unrecognized eastern government allied with Haftar has set up a similar institution that has repeatedly tried to sell Libyan oil on the foreign market to participate in the oil market in Libya. A U.N. Security Council resolution has blocked such attempts to prevent illicit crude oil exports.

Şahin also pointed to the fact that the EU had a bad track record of showing a united stance toward many international crises in recent years, a trend that can still be seen in the case of Libya.

"We saw this in Libya. France tends to align itself with Haftar, while Italy sides mostly with the GNA; Germany, on the other hand, follows an approach different from both of them. So, we can say that the Berlin summit was an attempt by the EU to re-emerge as a united political actor in the world," Şahin said.

The EU faces difficulties in terms of exercising true foreign policy because it cannot back it up with military force. On the other hand, the European Council is riddled with internal conflicts when it comes to deploying economic power and distributing its resources. As a result, China, Russia and Turkey have seized the opportunity to increase their influence in the region and within the EU. The EU's impotence in Syria has only increased the bloc's vulnerability to external threats. The bloc has consistently avoided any direct involvement, except for limited and insignificant funding and the arming of certain opposition groups.