Erdoğan: Turkey will do whatever is necessary in Libya for peace, stability 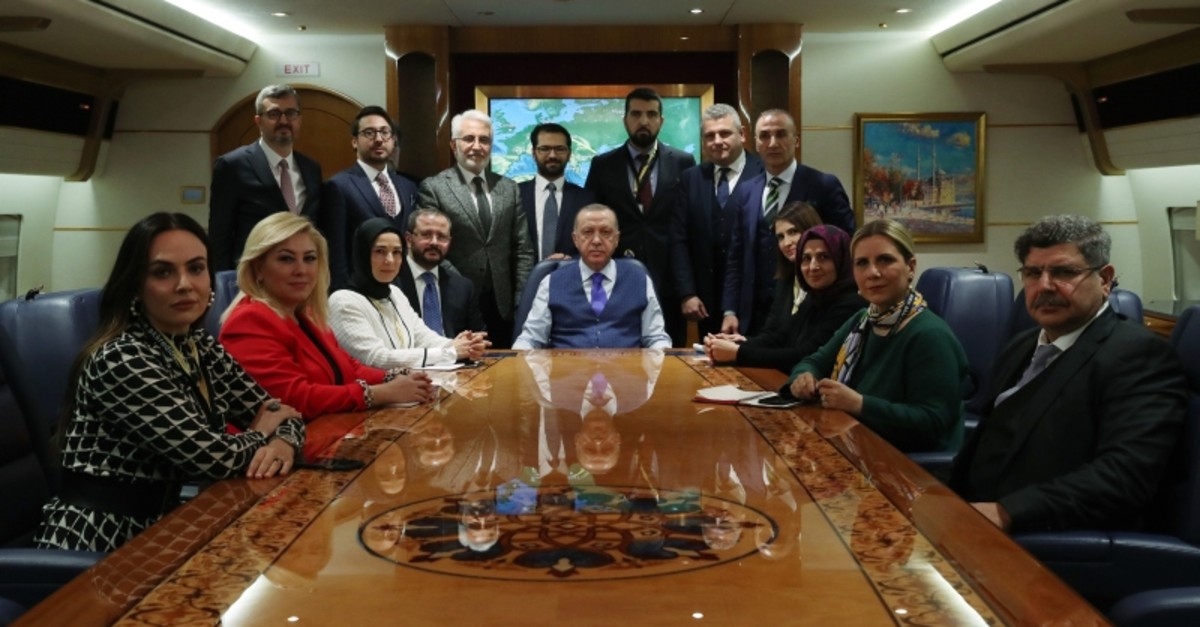 President Recep Tayyip Erdou011fan poses for a photo with inside the presidential plane. (AA Photo)
by İbrahim Altay Jan 20, 2020 3:03 pm

Turkey will take all necessary measures to support the U.N.-backed legitimate government in Libya and ensure forces loyal to putschist Gen. Khalifa Haftar stop their attacks, President Recep Tayyip Erdoğan said Monday, underlining that Ankara will continue diplomatic efforts to provide stability in the conflict-ravaged country and stand by the Libyan people.

Erdoğan's remarks came following the Berlin conference held on Jan. 19 with the participation of major international actors to find a diplomatic solution to the Libyan crisis.

"The critical point here is that Haftar should stop his aggressive stance. Since April, Haftar's has been the side which violated all deals and attacked the legitimate government," Erdoğan told members of the Turkish press accompanying him on his way back from Berlin to Turkey. He said that he mentioned this issue during the meetings in Berlin and none of the participant actors stated opposition against it.

Erdoğan also added that Turkey is ready to take necessary measures if Haftar's forces do not abide by their commitments, highlighting Turkey has fulfilled its responsibilities so far in finding a diplomatic solution for the Libyan crisis.

Libya's legitimate government had been under attack by Haftar since last April, claiming the lives of more than 1,000 people.

On Jan. 12, the sides announced a cease-fire in response to a joint call by the Turkish and Russian leaders.

But talks last week for a permanent cease-fire deal ended without an agreement after Haftar left Moscow without signing the deal.

On Sunday, Haftar accepted in Berlin to designate members to a U.N.-proposed military commission with five members from each side to monitor the implementation of the cease-fire.

Erdoğan also touched on the presence of Turkish troops in Libya and criticism from some parties about Turkey's decision to give military aid to Libya's legitimate government.

Saying that Turkey has only sent a team of trainers to Libya for military training, Erdoğan added: "On the other hand, the Wagner Group has 2,500 security personnel here (in Libya). Why don't you bring this matter to the table? When we say this, they offer no response. It is not only Wagner; there are also 5,000 soldiers from Sudan there. In addition to this, there are soldiers from Chad and Niger. The Abu Dhabi administration takes from whatever sources they can find."

He added that the ones that come from Sudan are mercenaries, and their funding is being provided by the UAE. Also mentioning Russia and the UAE's military support to Haftar forces, Erdoğan said Turkey expressed its expectation for sensitivity about the issue during Berlin talks.

Responding to the aftermath of the Libya peace talks, Erdoğan said Turkey cannot force the legitimate government to do anything and that if promises have been made, they will be fulfilled.

"Sarraj is a leader recognized by the U.N. Security Council. Haftar does not have such a status. About this, especially (German Chancellor Angela) Merkel did not offer any contrary statements. At such a table, the one who invited us is the leader of a legitimate government, the other is illegitimate," Erdoğan said, referring to the GNA's invitation for Turkey's military aid in Libya.

Underlining that Turkey also took necessary legal steps in Parliament for the military mandate, Erdoğan said there have not been similar processes in Russia.

"We will see the consequences of these steps in Libya. Libyan people's peace is very, very important for us," he added.

Another important issue Erdoğan mentioned was the oil ports in Libya. Underlining the importance of oil ports for the Libyan crisis, Erdoğan said that Haftar has been trying to build barriers over oil ports to take control of these areas.

"For example today, both (U.N. Libya envoy Ghassan) Salame and (U.S. Secretary of State Mike) Pompeo revealed the same opinion with us about oil ports. They also brought the issue of oil ports into the agenda. This is proof that we stand in a very important position. Especially Salame defending this makes our job easier," he explained.

In response to a question about Italy's stance regarding the EastMed pipeline and recent developments in the Mediterranean, including the maritime pact with Libya, Erdoğan said Italy's expectations regarding gas demonstrate that the TurkStream project is a "strategic investment."

The president noted that while the Turkey-Libya agreement was a bilateral deal, they may include three other countries later on and have a consensus with Libyan Prime Minister Fayez al-Sarraj on this. He noted that the inclusion of other countries in the deal will lead to further progress in the region.

Erdoğan continued by saying that Somalia has asked Turkey to explore oil off its shores using its seismic exploration vessels and drilling ships.

He highlighted once again that all gas found off the island of Cyprus belongs to both sides of the island, even though the Greek Cypriot administration never adhered to this rule or talked with the Turkish Republic of Northern Cyprus (TRNC) on the fair distribution of gas.

The fact that Turkey and Libya both have shores facing each other "drove Greece mad," according to Erdoğan, who noted that Turkey had already discussed the matter with late Libyan leader Moammar Ghadhafi in the past.

He said that the Greek Prime Minister Kyriakos Mitsotakis invited putschist Gen. Khalifa Haftar to Athens to provoke Turkey. More importantly, he noted that somebody approached him at the Berlin summit and told him that Mitsotakis wants to reconcile with Turkey.

"I told them this is nonsense that he wants to make up with us, but then goes ahead and invites Haftar," Erdoğan said, adding that he told the unidentified interlocutor that Mitsotakis needs to fix his mistake about meeting with Haftar if he really wants to mend ties with Turkey.

Haftar on Friday visited Greece and met with Mitsotakis to seek support just two days before the Berlin conference on the Libya conflict.

No negotiations with terrorists

In response to a question about whether Turkey is acting as a mediator in Moscow and Berlin to solve the Libyan conflict, Erdoğan said he had previously told Putin that they will not mediate between the two sides.

"Mr. Putin told me that he will take care of Haftar, and if we can take care of Sarraj, then we can resolve the matter," Erdoğan said, noting that he refuses to sit down at the negotiating table with terrorists and had turned down U.S. President Donald Trump's request to negotiate with the notorious YPG/PKK commander Ferhat Abdi Şahin.

Since the ouster of late ruler Moammar Gadhafi in 2011, two seats of power have emerged in Libya: putschist Gen. Khalifa Haftar in eastern Libya, supported mainly by Egypt and the UAE, and the Government of National Accord (GNA) in Tripoli, which enjoys U.N. and international recognition.

As far as Idlib is concerned, Edoğan said it was another major topic on the agenda during the Berlin summit. The president said he spoke about the issue both during the summit and in bilateral meetings, especially with his Russian counterpart Vladimir Putin. According to Erdoğan, when he reminded Putin about the situation in Idlib, the Russian president stated that the cooperation between the two countries, especially between the departments of foreign relations, defense and intelligence, should continue.

"They now see the groups we see as 'moderate oppositions' as 'terrorists,' claiming that these groups harmed Russia. However, I told him (Putin) that when they see these groups as terrorists, the Assad regime terrorizes the whole country," Erdoğan said, reiterating that the Syrian regime has killed hundreds of thousands of people and still continues its attacks in Idlib. "Yet," Erdoğan said, "(Putin) fails to accept this truth."

Turkey has pushed hard for a cease-fire in Idlib after the region endured months of battering by forces loyal to the Bashar Assad regime and its allies.

Over 1 million Syrians have moved near the Turkish border due to intense attacks over the last year.

Heralding that Turkey is getting ready to launch a new campaign, Erdoğan said new shelters from briquette will be built for the refugees, which would ease living conditions for them. "Now, we will mobilize the Turkish Red Crescent and the Disaster and Emergency Management Presidency (AFAD) on this issue and start to build these," he said, underlining that Turkey is key to achieving peace in the region.

"Right now, we are a strong state, and there are lots of expectations from us. It is not possible for us to stay silent in the face of such expectations. We have to take action within the scope of international law at all times," the president further underlined.

Underlining that the ties with Russia can be defined as "strategic," Erdoğan expressed the unique nature of this relationship and said that it is far from "classic."

"These strategic ties are making our relations much stronger. I do not see foresee any problems (with Russia) at this point," the president added.

Regarding Turkey's intelligence work in Syria, Erdoğan said the head of the National Intelligence Agency (MİT) has been maintaining its communication with top intelligence officials of Syria, Iran and Russia, as well as other major international actors such as the U.S. "A country's intelligence service is the most important cornerstone of it," he emphasized.

Highlighting that Idlib is the biggest priority in Syria for Turkey, Erdoğan said although recently there have been some attacks on observation points in the conflicted province, they have been responded to through proper channels. "Besides, as you know, we also have control over Tal Abyad and Ras al-Ayn. There is no way for us to give up on our work there. We want to turn the region between Tal Abyad and Ras al-Ayn into a place where we would be able to realize our plans," he said, adding that even if the international community refuses to assist Turkey, it will carry on by itself. He underscored that if this transformation can be managed, these provinces could be turned into "Peace Cities."