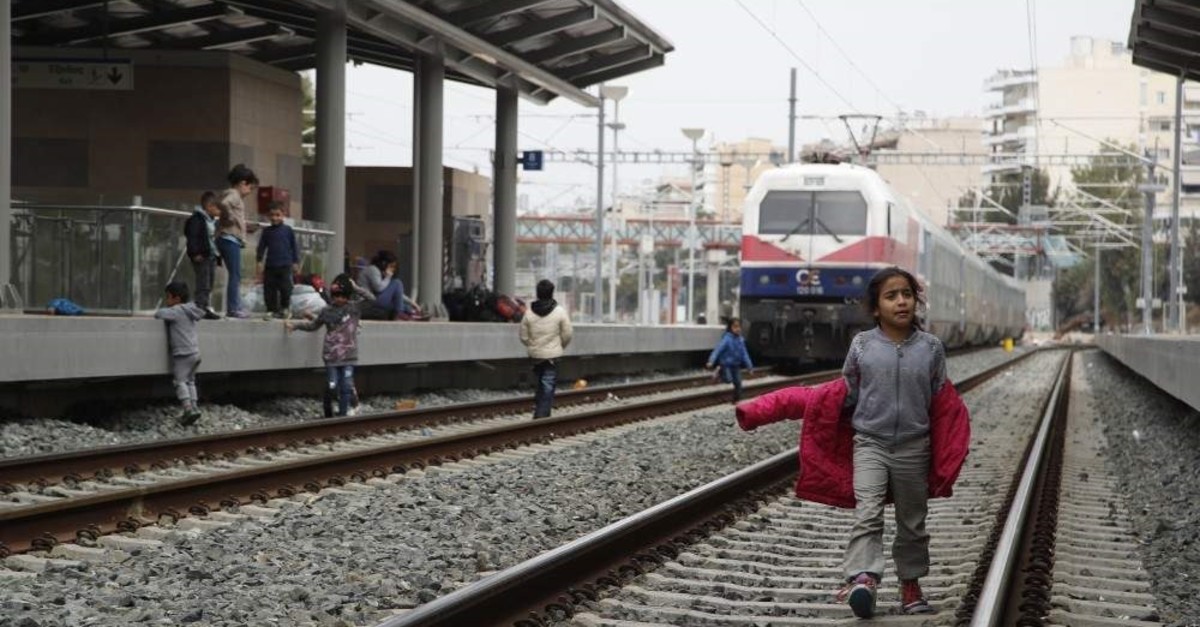 A migrant boy walks at the rail wall that blocked from migrants at the Larissis rail way central station in Athens, April 5, 2019. (AP Photo)
by Daily Sabah Jan 21, 2020 3:38 pm
While Turkey continues to combat the influx of irregular migrants toward Europe as part of a 2016 deal, nongovernmental organization workers in the field accuse Greek authorities of illegally deporting migrants back to the Turkish coast.

Locals along the Maritsa River are unhappy with the aggressive behavior of Greek officials in the region, according to Turkish Deutsche Welle (DW).

"Everyone knows that there are vehicles that don't belong to the police department, and locals in the area are aware of the fact that these vehicles are deporting refugees illegally," said a local cafe owner.

Based on the accounts of the illegally deported migrants, Greek police officers have been accused of torturing the migrants and confiscating their valuables.

"Turkish police caught me twice. Greek police caught me in my third time. They beat me, broke my phone and then sent me back to Turkey," said an Afghan refugee residing in Thessaloniki who managed to pass the border on his fourth try.

Der Spiegel has published images of security cameras showing a few masked men who are accused of illegally deporting refugees back to Turkey. These images are shown as proof of illegal deportation cases in Greece.

Selma Mesic from a local NGO that assists refugees in Thessaloniki confirmed the claims. Refugees are taken to centers by police where 60-100 people are detained soon after they arrive in Greece. Mesic's crew is keeping a record of illegal deportations. "Police take them to the riverfront. Refugees are saying that masked men are waiting for them there, and these men abandon them by releasing them to the river by boat," she said.

Two Moroccan refugees also put forward similar claims. "We managed to pass the river as three people, but a Greek police officer attacked one of them, tying his arms and legs with plastic wires and throwing him to the river," they said. "We don't know if he is alive or not. We were sent back to Turkey after this incident."

When asked about the claims, Greek police have remained silent.

Mesic argued that, although there has not been any official confirmation from the Greek authorities yet, it is unlikely that refugees are making up these stories. "Several independent and EU institutions have collected information regarding this issue. All of these institutions find these stories quite credible. Different people from different countries are stating that they experienced this kind of behavior from Greek police at different times," Mesic said.

As a country with maritime and land borders shared with Bulgaria and Greece, Turkey has been a key transit point for irregular migrants aiming to cross into Europe to start new lives. Either fleeing poverty or conflicts, thousands arrive in Turkey every year to take their chance at illegally crossing into Europe.

Turkey and the European Union signed a deal in 2016 to curb illegal immigration through the dangerous Aegean Sea route from Turkey to Greece. Under the deal, Greece sends back migrants held on the Aegean islands they crossed to from nearby Turkish shores, and in return, EU countries receive a number of Syrian migrants legally. The deal, reinforced with an escalated crackdown on human smugglers and more patrols in the Aegean, significantly decreased the number of illegal crossings.

Turkish officials said they sent most of the detained irregular migrants back to their countries of origin except for the Syrians, who were sent back to the Turkish town where they originally registered as refugees.
RELATED TOPICS