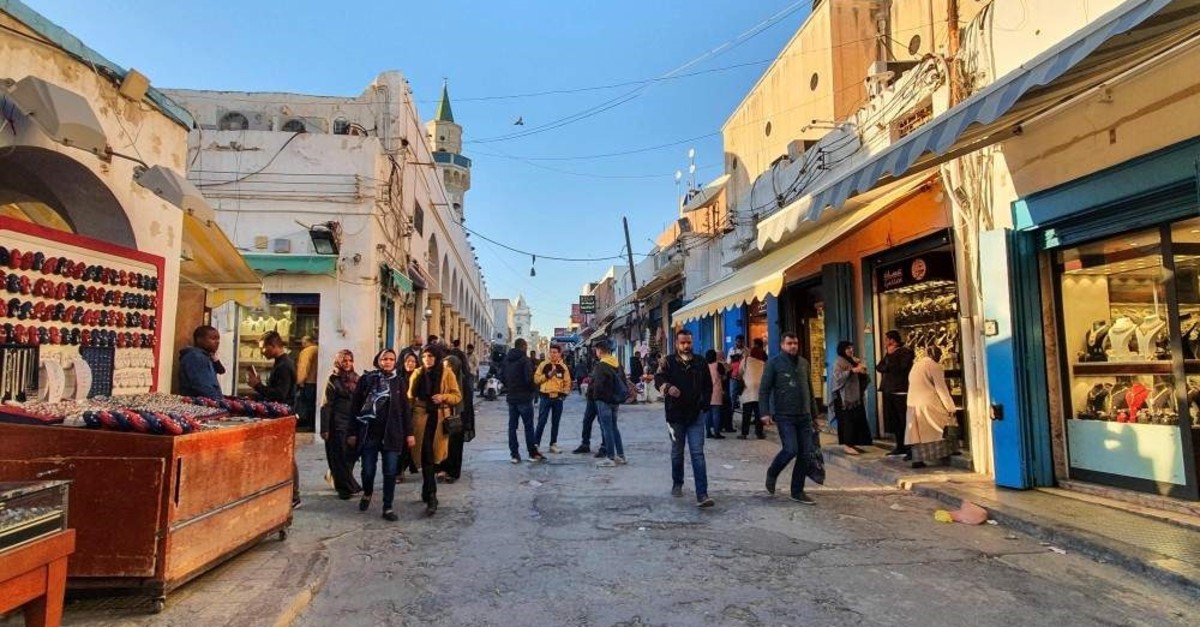 Although the Berlin summit was welcomed as a positive development in the process for establishing a political solution in the Libya conflict, locals in the war-torn country are suspicious of the conference's implementation despite their deep desire to maintain hope for the future

The people of Libya look at the Berlin summit with suspicion as the concluding remarks will prove difficult to implement on the ground.

"We hope that life eventually turns back to normal. However, when there is a negotiation meeting on one hand (referring to the summit), there are still attacks to Tripoli. No peace can be achieved this way," said Mohamad Abdullah, a 44-year-old Libyan, expressing his continuing fear over the escalating tension in the region.

Underlining the necessity of forming a cease-fire in the region, Abdullah said that immediately after the launch of a truce, the ones who have been displaced due to the conflict should return to their hometowns.

"The armed forces should retreat, and people need to return home. In these circumstances, when the armed forces are invading the field, a political solution is not possible," he said, speaking to Anadolu Agency (AA).

An oil-rich country of northern Africa, Libya got into a circle of conflict as the putschist Gen. Khalifa Haftar, the head of the illegitimate armed forces in the east of the country, launched an attack to capture the capital province of Tripoli back in April 2019.

The following 10 months have witnessed the displacement of hundreds of thousands of Libyans from their homes while approximately 2, 000 people, including civilians, have been killed during the conflict.

"I'm not hopeful of the result of this conference. The solution must be achieved through the Libyans. It is hard for us to find a solution when foreigners are involved," said a 28-year-old doctor, Mohamad Suhab, insisting that there is no way for the results of this summit to be implemented in real life.

Still, despite months of conflict, the desire to reach peace dominates the suspicion for some Libyans, enabling them to hold onto hope in the face of developments like the Berlin summit.

The 36-year-old Salah Mohamad expressed that he hopes for the conclusion of the summit to be reflected on the ground as the ongoing conflict negatively influences their day-to-day life by causing a rise in rent, electricity cuts and interruption of municipal services.

After the meeting, a list of concluding remarks were released with the countries in attendance having agreed on the points outlined.

"We commit to refraining from interference in the armed conflict or in the internal affairs of Libya and urge all international actors to do the same," read Article 6, while Article 9 confirmed that all concerned parties would welcome a cease-fire deal brokered by Turkey and Russia that was supposed to have been implemented on Jan. 12.

Meanwhile, Article 12 called "for a comprehensive process of demobilization and disarmament of armed groups and militias in Libya," while Article 16 called on the U.N. to impose "appropriate sanctions on those who are found to be in violation of the cease-fire arrangements and on Member States to enforce these." Article 26, on the other hand, urged all Libyan parties to resume "the inclusive Libyan-led and Libyan-owned political process."

However, Haftar's forces continued their assaults just as the meeting was ending, violating the summit's entire premise. The sound of explosions could be heard in the capital Tripoli immediately after the Berlin summit.

Abdul-Malik al-Madani, spokesman for the Burkan al-Ghadab (Volcano of Rage) Operation by Libya's U.N.-recognized government, told AA that the militias violated the cease-fire by launching a random mortar attack on the Salah al-Din region south of Tripoli.

As the violation of the truce continued, Libya's Prime Minister Fayez al-Sarraj said he will not sit with putschist Haftar again, hoping that his supporters would review their decisions.

Speaking in a broadcast interview with Al-Jazeera Tuesday, the head of Libya's U.N.-recognized legitimate Government of National Accord (GNA) stressed that Abu Dhabi interfered in his country by supporting Haftar, adding that the United Arab Emirates has no common borders with Libya, which "raises a question about its goals of interfering in Libya."

Sarraj also questioned the reasons why the Emirates is establishing a military base on his country's territory.

The prime minister stressed that he would respect the Berlin conference's call for a cease-fire and political talks, but he would not sit with Haftar again.

The continued closure of the oil facilities by tribe members loyal to eastern Libyan forces increases pressure on their adversaries in the west, the U.N.-backed government that controls the capital, Tripoli.

Hafter's tribal allies closed a major pipeline over the weekend, potentially cutting national output to a small fraction of its normal level, according to the oil corporation.

The divisions in Libya are under the control of power and wealth, in a country where wealth is derived almost exclusively from oil revenues. As the Tripoli offensive goes on, this source of income will likely become a crucial part of it.

Revenue from oil exports, however, still flows into the Central Bank of Libya in Tripoli, which works alongside the GNA. The NOC, which dominates the country's oil sector, has tried to stay out of political conflicts and maintain a neutral perspective in the conflict.

Adding to the complications of Libya's conflict dynamics, the unrecognized eastern government allied with Haftar has set up a similar institution that has repeatedly tried to sell Libyan oil on the foreign market to participate in the oil market in Libya. A U.N. Security Council resolution has blocked such attempts to prevent illicit crude oil exports.

The United States called on Tuesday for an immediate resumption of Libya's lifeline oil exports.

"The suspension of National Oil Corporation (NOC) operations risks exacerbating the humanitarian emergency in #Libya and inflicting further needless suffering on the Libyan people," the U.S. Embassy in Tripoli tweeted.

Regarding the oil issue, Sarraj said Libya would face a catastrophic situation if Haftar forces continued blockading the oil fields, expressing his hope that foreign powers would put pressure on Haftar to reopen the oil ports soon.