Tension between US, Iran concerning for Turkey, FM Çavuşoğlu says 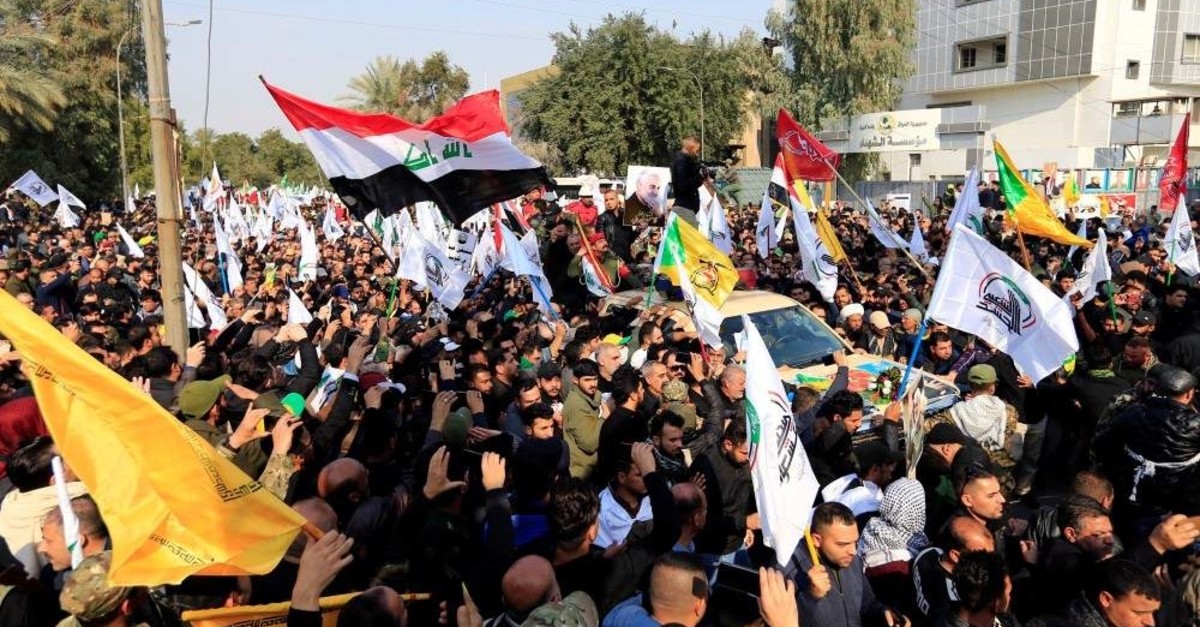 Mourners attend the funeral of the Iranian Major-General Qassem Soleimani, the top commander of the elite Quds Force of the Revolutionary Guards, and the Iraqi militia commander Abu Mahdi al-Muhandis, who were killed in an airstrike at Baghdad airport in Baghdad. Jan. 4, 2020. (REUTERS/Thaier al-Sudani)
by Meryem Ilayda Atlas Jan 21, 2020 11:09 pm

Underlining Turkey's concerns on the growing tension between the U.S. and Iran, Foreign Minister Mevlüt Çavuşoğlu warned about the possible risk of instability and insecurity in the region

The escalation of tensions between the U.S. and Iran is a "grave source" of concern for Turkey, said Foreign Minister Mevlüt Çavuşoğlu, underlining that further escalation may bring new instabilities and insecurities to the region.

"Although the situation seems to have calmed, it is still fragile and the risk of a conflict cannot be totally ruled out. Further escalation, which may include direct or indirect clashes, could lead to a new cycle of instability and insecurity in the region and this will be in no one's interest," Çavuşoğlu said in an exclusive interview to Daily Sabah.

The foreign minister emphasized that in such a case, Daesh and other terrorist groups such as the PKK would be the first beneficiaries of such instability. He also reminded that military actions do not promise lasting solutions to regional problems but rather "lead to a deadly spiral of violence and eventually bring great harm to everyone, as past experiences prove."

"Therefore," Çavuşoğlu said, "there is a genuine need for all parties to act with prudence and restraint. We continue to urge both sides to refrain from escalatory steps and prioritize diplomacy and dialogue."

His death marked a dramatic escalation in tensions between the U.S. and Iran, which have often been at a fever pitch since Donald Trump chose in 2018 to unilaterally withdraw Washington from a 2015 nuclear pact world powers struck with Tehran.

Iran's IRGC launched more than a dozen of ballistic missiles against U.S. military and coalition forces in Iraq.

The tension put the lives of the Iraqi people and Iraq's sovereignty at risk. In response, the Iraqi parliament decided on Jan. 5 to end the military presence of all foreign troops in the country, including the U.S.

On Jan. 10, Iraqi Prime Minister Adel Abdul-Mahdi called Pompeo to demand the U.S. to send a delegation to Iraq for the establishment of a mechanism to withdraw its forces from Iraq.

However, Morgan Ortagus, the spokeswoman for the U.S. Department of State, said a military withdrawal from Iraq is not on the U.S. agenda.

Pointing out Turkey's diplomatic efforts on the matter, the foreign minister stated that all the concerns and expectations of the country have been delivered to numerous international actors, especially to the U.S. and Iran.

"As a country directly affected by conflicts on the other side of its borders, Turkey needs to prioritize prudence, dialogue and diplomacy. We hope all sides understand and value this principled approach. We believe that the diplomatic window of opportunity is still open and the international community should exert maximum effort in this direction, which in the end could create a new path to peace, stability and security in our region," he emphasized.

Çavuşoğlu also expressed that he hopes these recent tensions between the U.S. and Iran will be the "final instance of the current discord" between the two.

"In this regard, we welcomed the statements of the U.S. and Iranian authorities emphasizing that they are not seeking a war or further escalation. We should be aware that no country in the region can remain immune to the undesired consequences of such an outcome," the foreign minister said, indicating that Turkey is determined to redouble its efforts to overcome the tension in the region through diplomacy and dialogue.

As far as Iraq is concerned, Çavuşoğlu underscored that restoring lasting stability, maintaining territorial integrity and upholding the sovereignty of Iraq are essential for achieving peace and security in the region and beyond.

"Furthermore," he added, "a democratic system of governance based on fair power and revenue sharing among all the components of the nation is a must. This should be supported by inclusive policies, which would strengthen the national identity and sense of ownership among various components of the Iraqi nation." Turkey is determined to continue to support its neighbor to move ahead, Çavuşoğlu noted.

Emphasizing the geopolitical importance of Iraq, Çavuşoğlu said the war-torn country has been struggling with various challenges for the last few decades.

"Located in a geostrategically critical area in the Middle East, Iraq has also been facing tremendous challenges which beset the country with armed conflicts, occupation and terrorism for the last 40 years. Each of these dark chapters in the recent past of Iraq has not only brought pain and agony to Iraqi people but also metastasized the problems the Middle East is trying to cope with," he said. The foreign minister also expressed that Turkey, in particular, strongly feels the reverberations of the destabilizing course of developments in Iraq.

"Today," he said, "neither the Middle East nor the globe at large can afford another cycle of conflict in Iraq in the face of the recently escalated tensions between the U.S. and Iran. As we announced on Jan. 3, Iraq should not become an arena where the others settle their scores."

Underlining that Iraq is not alone in its struggles, Çavuşoğlu stated that the diplomatic efforts between Turkey and Iraq have always been intense with a major emphasis on cooperation.

"As an act of solidarity and to stress that Iraq is not alone in these dire times, I visited Iraq on Jan. 9 and met with President Barham Salih, Prime Minister Adel Abdul-Mahdi, speaker Mohammed al-Halbousi and Foreign Minister Mohammed al-Hakim. In all meetings, we underlined the importance of respecting Iraq's sovereignty and territorial integrity. We agreed to work together in this regard," the foreign minister said.

Regarding the reconstruction of Iraq, Çavuşoğlu expressed that the work on the issue should start as soon as possible and Turkey is ready to take part in the process.

"There should be no more delay in the reconstruction of Iraq, and the Iraqi people should enjoy much better standards of living that they all deserve. With that in mind, Turkey pledged a $5 billion soft loan to contribute to the rehabilitation of the areas stricken by Daesh, to help return the internally displaced persons and to invest in energy, transportation lines and water management," he said.

Following the defeat of Daesh, Iraq has been facing the task of rebuilding the war-torn country and restoring security. As a neighboring country, Turkey had announced that it would provide the necessary support in efforts for reconstruction.

Turkey assisted in redeveloping the cities of Kirkuk, Mosul, Tal Afar, Baghdad, Irbil and Sulaymaniyah through the Turkish Cooperation and Development Agency (TİKA) to help Iraqis return to their homes.

Çavuşoğlu also expressed that Turkish companies are interested in building airports and industry zones to help Iraq connect with the wider world and generate employment.

"On a positive account," he added, "we have already delivered a significant part of our $50 million project-based assistance in 2019 and are committed to doing more in the upcoming period. Our consulates in Mosul and Basra, which will reopen shortly, will supervise these efforts to the benefit of our Iraqi brothers and sisters."

"We want Iraq to be a subject of positive agenda, not for repeated conflicts. With its huge potential, Iraq, with good governance and the support of its regional and international partners, could quickly turn into a country that generates stability and wealth in its wider region," the foreign minister underlined, indicating that this is Turkey's vision for the future of its neighbor.