Ankara refuses to abandon Tripoli in its legitimate fight 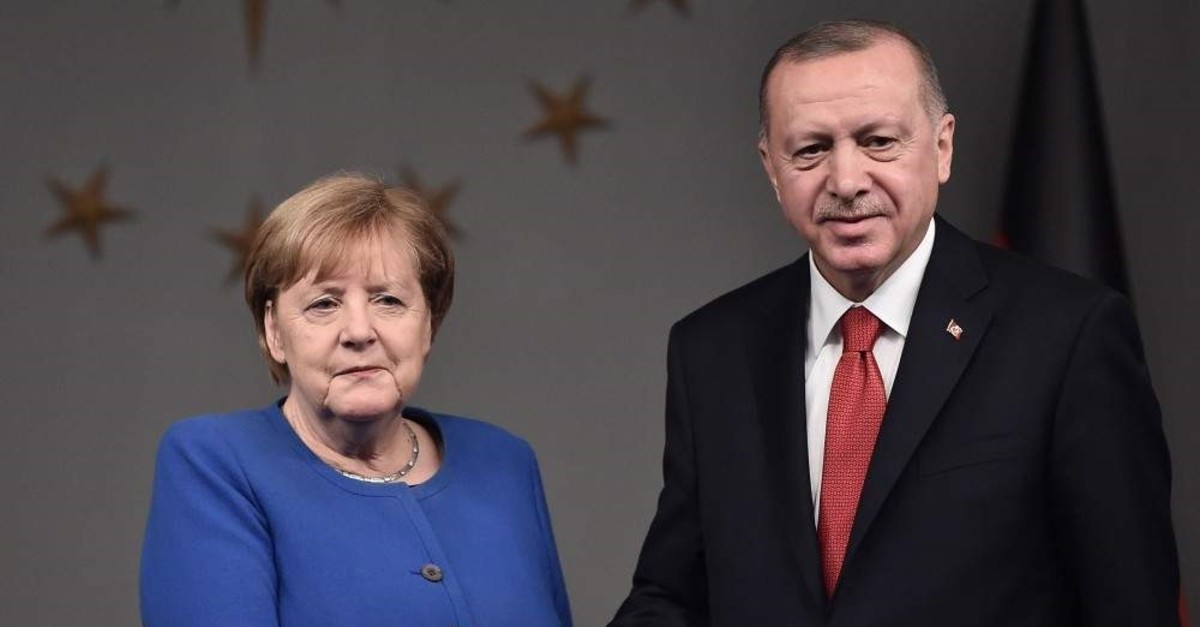 Turkey will continue to support Libya's U.N.-recognized government and its leader Fayez al-Sarraj, President Recep Tayyip Erdoğan said Friday, underlining that it is Turkey's right and responsibility to side with the Libyan people given its 500 years of ties with the country.

Speaking at a joint press conference with German Chancellor Angela Merkel in Istanbul, Erdoğan reiterated that "Turkey is determined to provide as much support as it can" to Libya's legitimate government and the Libyan people against the eastern-based illegitimate forces of putschist Gen. Khalifa Haftar.

"Haftar is not recognized legitimately so it is hard to understand that some countries are acting as if he is," Erdoğan said.

He emphasized that supporting Libya's Government of National Accord (GNA) is not an option but an obligation under U.N. Resolution 2259.

"If the countries like UAE and actors like Wagner continue to spoil him, he would act this way," he added. Libyan and U.S. officials accused Russia of deploying fighters through the private security contractor firm, the Wagner Group, to key battleground areas in Libya over the past few months. They claim the Russian fighters are backing Haftar, whose forces have been trying for months to capture the capital Tripoli.

Touching upon the latest developments in Libya, Erdoğan said that the increase of attacks by Haftar forces in recent days show that Haftar does not have the intention to reconcile.

Regarding diplomatic initiatives and peace efforts initiated by international actors, Merkel said that the fragile cease-fire in Libya must be turned into a solid and sustainable one.

"The most important step in Libya now is the meeting of the military commission. I, of course, do not expect that all of the truces will end at once. However, it was very important for both sides to agree with all the 55 articles at the Berlin conference," Merkel added.

In response to Merkel's statement, Erdoğan said that despite the fact that Haftar accepted the terms, he did not sign any deal.

"Accepting articles verbally is something, accepting them by signing is something else. We cannot take this seriously right now. We cannot be sure what he will do next," he said.

Articles agreed at the Berlin conference on Libya will be approved by the U.N. Security Council, Merkel confirmed.

On Jan. 12, the conflict parties of Libya announced a cease-fire in response to a joint call by the Turkish and Russian leaders. But the talks for a permanent cease-fire deal ended without an agreement after Haftar left Moscow without signing the deal. On Sunday, Haftar accepted in Berlin to designate members to a U.N.-proposed military commission with five members from each side to monitor the implementation of the cease-fire. But reports said Tuesday that forces loyal to Haftar once again violated the fragile cease-fire with the U.N.-recognized government, firing mortar shells on southern areas of the capital.

Since the ousting of late ruler Moammar Gadhafi in 2011, two seats of power have emerged in Libya: One in eastern Libya supported mainly by Egypt and the UAE, and the other in Tripoli, which enjoys U.N. and international recognition. The GNA has been under attack since April from Haftar's forces, with fighting killing over 280 civilians and 2,000 fighters.

Regarding the situation in northwestern Syria's Idlib, Erdoğan called on the EU and European countries to provide more and faster assistance to Syria, saying that it is a "humanitarian responsibility."

In the face of Assad regime's attacks targeting civilians and residential areas in Idlib, Erdoğan also said all parties need to put pressure on the Syrian regime to stop the bloodshed in Idlib.

Turkey and Russia agreed in September 2018 to turn Idlib into a de-escalation zone in which acts of aggression are expressly prohibited. Since then, more than 1,300 civilians there have been killed in attacks by the regime and Russian forces as the cease-fire continues to be violated.

Erdoğan reiterated Turkey's latest efforts to build 10,000 briquette shelters for Idlib refugees and added: "We have informed Germany that our plans and projects for the safe zone are ready, but we need to take the step together. However, we have not received any positive response on the issue so far."

Appreciating Turkey's efforts in the refugee crisis, Merkel said: "We can support the building of houses for the civilians fleeing Idlib."

According to Turkey's safe zone plan, 140 villages and 10 district centers will be established within a 30-40 kilometer deep safe zone in northern Syria, housing 5,000 and 30,000 inhabitants, respectively. The settlements will be provided with various facilities so that the people living there will be able to have a normal life with every necessity met. Each village within the area will have 1,000 houses, and each district will have 6,000 new homes built, making 200,000 new residences in total. The construction is expected to cost about $26.6 billion.

Other important topics discussed by the leaders at the press conference were bilateral relations, Turkey-EU relations and the Turkish diaspora in Germany.

Saying Turkey is determined to boost cooperation with Germany in the fields of economy, trade, investment, energy and tourism, Erdoğan added: "We have decided that pursuing our rooted bilateral relations would benefit not only Turkey and Germany but also the entire region."

"Germany will be the EU term presidency in July. We see this as an important opportunity for Turkey-EU ties," Erdoğan also said.