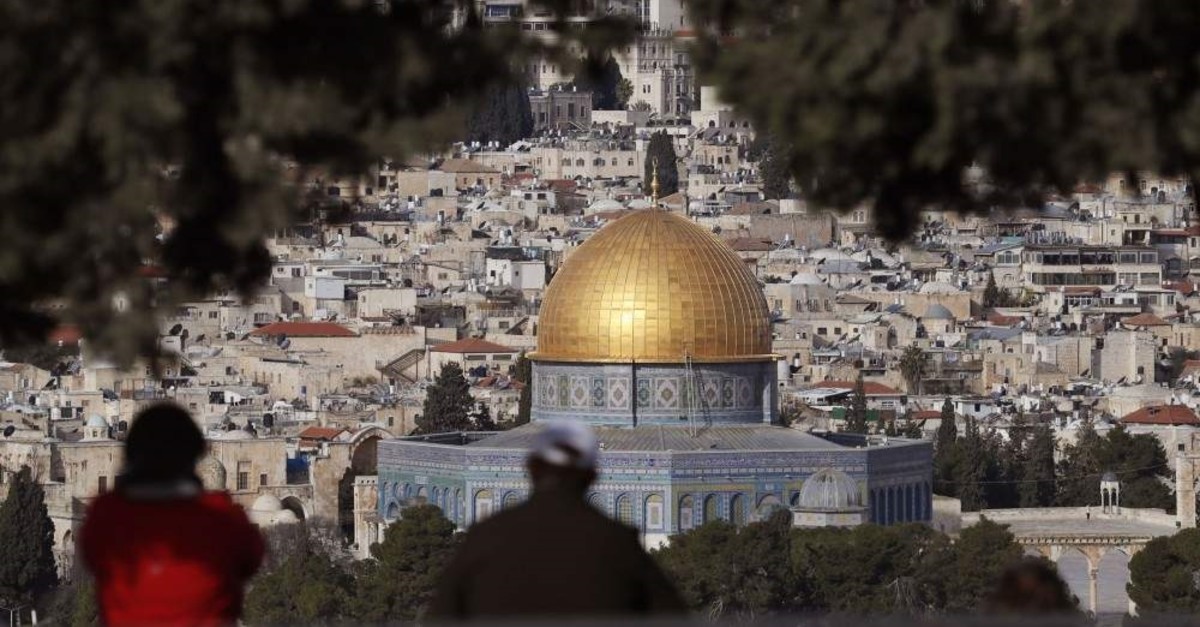 Turkish politicians, citizens, side with Palestinian cause against the recent U.S. plan favoring Israeli occupation in the region while "betraying" Palestinians

Turkey expressed outrage over a unilateral peace plan by the United States for the Israeli-Palestinian conflict as authorities pointed to Jerusalem as a "red line" for the country. The Turkish public, meanwhile, flocked to the streets to protest in both Washington and Tel Aviv for their "betrayal" of the Palestinians.

Being one of the main countries that have maintained a clear position on the Palestinian cause, Turkey responded to the so-called "Deal of the Century" by U.S. President Donald Trump, stating that the people and land of Palestine were not for sale.

"Jerusalem is sacred for Muslims and Trump's so-called peace plan proposing to leave Jerusalem to Israel is never acceptable," President Recep Tayyip Erdoğan said Wednesday, during his return from his three-country Africa tour.

The president emphasized that the plan ignores Palestinians' rights and attempts to legitimize Israel's occupation. The plan will not serve peace nor a solution in the region, he stressed.

"I've demanded from Trump the details of the plan before his speech so that we can determine a position in accordance with that," referring to the phone call held between the two leaders on Monday. Erdoğan also hinted that next week's meeting of the Organization of Islamic Cooperation (OIC) would determine Muslim countries' perspective on the issue.

On Tuesday, Trump released his oft-delayed plan to end the Israel-Palestine dispute in the White House where Israeli Prime Minister Benjamin Netanyahu was present, whereas Palestinian authorities were not represented. During the news conference, Trump referred to Jerusalem as "Israel's undivided capital."

In an official statement, the Turkish Foreign Ministry said the agreement was "stillborn."

"This is an annexation plan aiming at usurping Palestinian lands and killing the two-state solution," the ministry said.

Stressing that Jerusalem was a red line in the eyes of Turkey, the statement said Ankara would not let Israel justify its occupation and persecution.

"We will always stand by the brotherly people of Palestine. We will continue to work for an independent Palestine within Palestinian lands," the statement added.

It concluded that Turkey would not support any plan that is not accepted by Palestinian authorities, adding that peace in the Middle East would not be obtained if policies based on occupation did not end.

Previously on December 2019, Erdoğan stressed that Turkey generally feels alone regarding the situation in Jerusalem and Palestine, but will not stop defending the cause.

"The situation in Palestine and Jerusalem is deteriorating and some Arab countries are encouraging Israeli violations. I feel like Turkey is alone on this, but we will continue to stand with the oppressed," Erdoğan told a meeting of the OIC in Istanbul.

Recalling that the Jerusalem case laid the foundation of the OIC, Erdogan said that the situation in Jerusalem and Palestine is getting worse every day.

Presidential Communication Director Fahrettin Altun also slammed the U.S. move, saying that it is nothing more than the legitimization of the Israeli occupation.

"This so-called 'peace plan' is simply a declaration attempting to legitimize the Israeli occupation and settlements. It is neither an implementable plan nor a fair assessment of the situation on the ground. It seeks to satisfy Israel while squashing Palestinian aspirations," Altun said on his official Twitter account.

Altun noted that the U.S.'s last major move on the issue, recognizing Jerusalem as the Israeli capital, has been opposed by most of the world.

"This plan tries to give Jerusalem to Israel. Jerusalem does not belong to Israel and it is not up to the third parties to offer it to anyone!" he said, adding that declarations without the support, agreement and endorsement of both sides would only bring instability to the region.

The top spokesman underlined that unilateral actions by the U.S. and Israel have already brought much bloodshed and tears to the region.

"This declaration shows the region must attend to its own issues without outside involvement. Some in the Gulf region appear to support such a plan that has nothing to do with equity, fairness and peace. They will have to respond to the Arab and Muslim public opinion," Altun said.

Releasing a written statement on the issue Wednesday, presidential spokesman İbrahim Kalın said Palestinian land is not for sale. Underlining that Turkey refuses the deal, Kalın expressed that this is nothing but another occupation plan.

Similarly, Justice Minister Abdulhamit Gül emphasized that Jerusalem is the free capital of Palestine, regardless of U.S. moves.

Another criticism came from Parliament Speaker Mustafa Şentop, who said, "Jerusalem is always a red line for us."

"Turkey's stance on the Palestinian issue is in line with international law and legitimacy," Şentop said on Twitter.

"The unilateral 'Plan' announced by the POTUS (President of the United States) is an attempt far from perceiving the Palestinian issue&the status of Jerusalem and is doomed to fail," Şentop noted in a tweet.

Ruling Justice and Development Party (AK Party) Spokesperson Ömer Çelik also stated Wednesday that the so called "Deal of the Century" of the U.S. is an occupation plan that has ignored the legitimate demands of Palestine.

"The provocation that has started with the relocating of the U.S. embassy to Jerusalem is ongoing. This is nothing but a mere attempt to legitimize the current aggressive stance of Israel," Çelik said, adding that the plan provides a basis for Israel to come up with new aggressive actions on the pretext of the security of the country.

The opposition figures also expressed solidarity with the Palestinian cause while condemning the plan.

The spokesperson of the main opposition Republican People's Party (CHP) Faik Öztrak said on Wednesday that the party is siding with the Palestinians.

"As CHP, it is not possible for us to accept a deal that was not accepted by our Palestinian brothers," he said.

"Trump had a stance that ignores all the demands of the Palestinians in order for Israel to accelerate its brutality in the region," said Temel Karamollaoğlu, head of the Felicity Party (SP), adding that brutalities by the Israeli state will eventually backfire.

The spokesperson of the Good Party (İP), Yavuz Ağıralioğlu, on the other hand, targeted Trump in his statement, saying that Israel has taken the U.S. as a cover for its expansionist attitude in the region.

Meanwhile, the Turkish Parliament issued a joint declaration on Wednesday, condemning the so-called peace plan for the Middle East. The declaration, signed by the AK Party, CHP, İP, Nationalist Movement Party (MHP) and the People's Democratic Party (HDP), stated that the deal conflicts with the U.N.'s two-state solution to the Israeli-Palestinian crisis.

"The plan aims to legitimize the occupation of Israel in the Palestine lands that have been deepened over the years while attempting to force Palestinians to accept the terms," the declaration said. It underlined that Turkey will never support any deal or plan that is against Palestinians' rights and freedoms.

People united over Palestinian cause

Turkey's political leaders were not the only ones who slammed the so-called "deal of the century," as the Turkish public reacted strongly to the move, labeling it as a "betrayal" of the Palestinian people.

One of the biggest protests took place on Tuesday night in the capital Ankara, where people gathered in front of the U.S. Embassy, as well as in front of the Israeli Consulate in Istanbul, with banners stating, "Jerusalem belongs to Islam." Anti-American and anti-Israeli slogans, especially ones targeting Netanyahu, dominated the protests.

Many nongovernmental organizations also joined the protests, including the Anatolian Youth Association (AGD) and Humanitarian Relief Foundation (İHH). Making a speech during the protests, the head of AGD's Istanbul branch Yunus Genç said that they gathered with an aim not to abandon the Palestinians, underlining that the deal only favors Israelis.

A hashtag has also been established by Turkish Twitter users on the issue, saying #yüzyılınihaneti (betrayal of the century), with thousands participating to condemn the U.S. move.

Protests continued Wednesday as well, with groups, mainly from left-wing fractions, including the Workers Party, came together in front of the U.S. consulate in Istanbul, calling the plan "nothing but garbage."

Speaking on behalf of the group, Kutlu Dane said that the plan orders Palestinians to give up all of their rights in return for a small amount of money.

"In between the lines, the plan constantly threatens the Palestinians," he said, adding that the plan is another version of the Balfour Declaration that enabled the Israeli state to be founded in the first place.

Protests took place all over the country Wednesday, including in the provinces of Van, Malatya, Muş and Adıyaman with the participation of many NGOs.