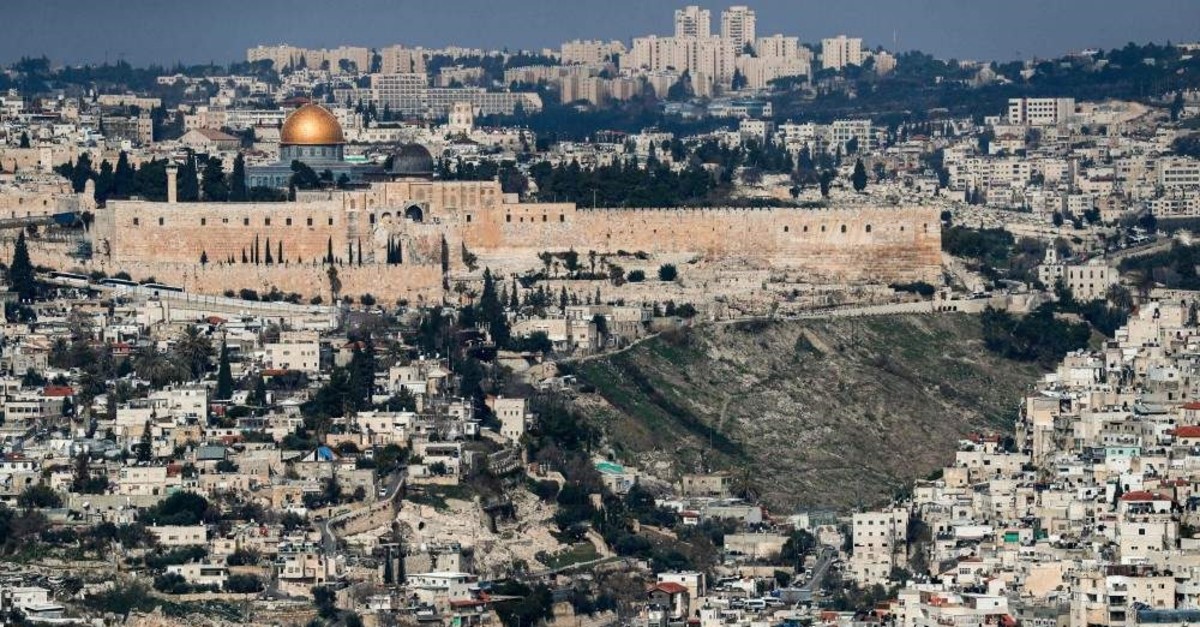 This picture from the Jabal Mukaber Palestinian neighborhood in Israeli-occupied East Jerusalem shows a view of the Old City of Jerusalem, including the Dome of the Rock and the surrounding al-Aqsa mosque compound, also known as the Temple Mount, with the neighborhood of Silwan seen below, Jan. 28, 2020. (AFP Photo)
by daily sabah Jan 30, 2020 2:20 pm

Reiterating Turkey's determined stance against injustice, Ankara urged the international community to unite in support of the Palestinian cause

Turkey has called on the international community to take a common stance in support of the Palestinian cause following the announcement of a controversial unilateral peace plan by the United States.

Releasing a series of Twitter messages late Wednesday, Presidential Communications Director Fahrettin Altun said: "The international community must present a united front against the injustice against Palestine. The fate of the struggle for Palestine cannot be decided by narrow national interests of some countries or even narrower self-interests of their leaders in the region."

Criticizing some Gulf countries' embrace of "the so-called peace plan that simply accepts the Israeli occupation," Altun said: "History will remember them as enablers of stolen Palestinian rights. There is no legitimacy to any plan that ignores Palestinians as legitimate counterparts."

Rejecting the Israeli administration's claims on Jerusalem, Altun added that no amount of unilateral declarations will be enough to change Jerusalem's status.

"A real Palestinian state, securing Palestinian rights, and proper designation of Jerusalem's status can only be possible if the Arab world, the Muslim world and those who believe in justice speak and act in unison. Every actor must consider their historic responsibility!" he added.

Being one of the main countries that have maintained a clear position on the Palestinian cause, Turkey has condemned the so-called "Deal of the Century" by U.S. President Donald Trump, stating that the people and land of Palestine are not for sale.

"Jerusalem is sacred for Muslims, and Trump's so-called peace plan proposing to leave Jerusalem to Israel is never acceptable," President Recep Tayyip Erdoğan said Wednesday, during his return from his three-country Africa tour.

On Tuesday, Trump released his oft-delayed plan to end the Israel-Palestine dispute at the White House. Israeli Prime Minister Benjamin Netanyahu was present for the event, but Palestinian authorities were not represented. During the news conference, Trump referred to Jerusalem as "Israel's undivided capital."

Turkey's foreign ministry, in response, stated that Turkey would not support any plan that is not accepted by Palestinian authorities, adding that peace in the Middle East would not be obtained if policies based on occupation did not end. The ministry also stressed that Jerusalem was a red line in the eyes of Turkey.

Bahçeli underlined the importance of a common stance against the proposed deal by all political parties in the Turkish Parliament.

In line with Turkey's efforts against injustice in the Palestine-Israel conflict over Jerusalem, Turkey is preparing to urge Muslim countries to take a stance against Israel and the U.S. next week during the Organisation of Islamic Cooperation's (OIC) Foreign Ministers Meeting.

Most of the Muslim countries remained silent when the so-called "Deal of the Century" was announced.

Turkey will reiterate its argument that giving Jerusalem to Israel is unacceptable because it legitimatizes Israeli occupation in Palestine lands by ignoring the rights of Palestinians.