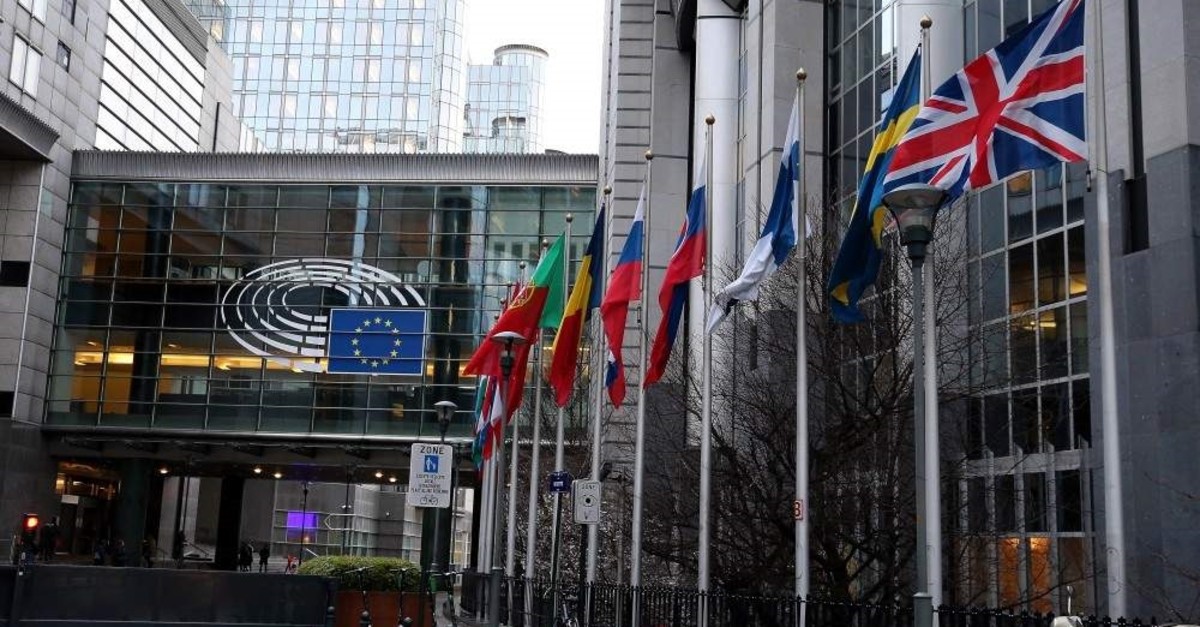 Reactions against a Greek member of the European Parliament poured in after he ripped a Turkish flag during a plenary session on migrants Thursday. The Greek Foreign Ministry, Turkey’s Defense Ministry, politicians and many others condemned the MEP for his racist and provocative act.

“The unacceptable acts of representatives of Neo-Nazism are far from Greek and European traditions,” the ministry said, noting that Lagos’ act directly targeted a national symbol, and he only represents himself rather than the country.

"We will continue to convey how noble and strong of our flag is to the desperate, spoiled children in the European Parliament who attack our flag with their dirty hands," the ministry said in a message posted with a video on Twitter.

Justice Minister Abdülhamit Gül said Turkey will take action against Lagos’ act, as he urged the international community to cooperate against the racist MEP in line with the law.

Ömer Çelik, a spokesman for the ruling Justice and Development Party (AK Party), also condemned the incident and said that by disrespecting the Turkish flag, Greek deputy showed his "personality lack of character."

"Our flag will continue to wave proudly as a symbol of independence in our country and to remind high values to humanity everywhere on earth," Çelik wrote on Twitter.

Stressing that the incident also targets Europe's values, Çelik added that the EU will become the address of those who want to destroy European values, if the European Parliament surrenders to racists, instead of developing democracy.

“Everybody does what is befitting to them. The Greek rips a flag but the Turkish nation exalts their flag,” Bahçeli said.

Sassoli will send a letter to Lagos and may order an oral hearing based on his response.

Lagos may receive an expression of disapproval, suspension of his activities and salary deduction for ripping the flag.

The far-right Greek MEP ripped the Turkish flag during the plenary debate on migrants on Thursday.

The infuriated MEP blamed Turkey for migrants going to Greece and allegedly “doing whatever it wants to do,” without any interference from European countries.

Another reaction came from the Turkish Republic of Northern Cyprus (TRNC), where various politicians condemned the move.

The president of the TRNC, Mustafa Akıncı, called the move “a step that needs to be condemned,” while Prime Minister Ersin Tatar stated that the move is “a provocation and an ugly attack against the Turkish nation.”

“It is refreshing to hear that the EP will not leave the move, which was condemned by the Greek government as well, unpunished,” Akıncı said.
Meanwhile, a series of protests against the move took place all across Turkey, with many hanging Turkish flags on their balconies. There were also unique forms of protests, such as one in the northwestern province of Bursa in which people skied alongside a giant Turkish flag.