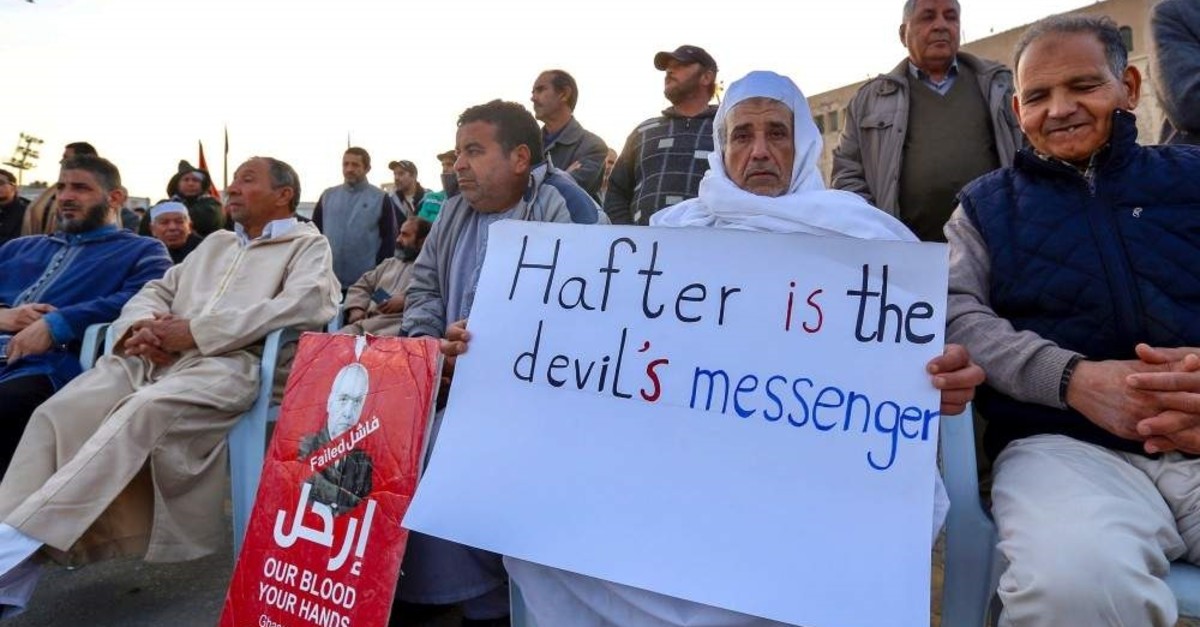 Libyans take part in a demonstration against eastern strongman Khalifa Haftar, and in support of the U.N.-recognised Government of National Accord (GNA), in the Martyrs' Square, Tripoli, Jan. 24. (AFP)
by Daily Sabah with Agencies Jan 31, 2020 3:18 pm

U.N.’s Libyan special representative Ghassan Salame on Thursday accused foreign actors of not abiding by the cease-fire agreements reached at the international summit in Berlin in January.

He told the U.N. Security Council via video link from Brazzaville that actors inside and outside of Libya "cynically nod and wink toward efforts to promote peace" but continue to "double down on a military solution."

"They violate the spirit and the letter of the Berlin conference," Salame said in an impassioned briefing to the 15-member council.

"I urge the parties and their foreign sponsors to desist from reckless actions and instead renew their expressed commitment to work towards a cease-fire," he added.

Salame’s comments came after continuous attacks by Libyan renegade warlord Khalifa Haftar, who has been supported by the United Arab Emirates, France, Russia and Egypt, despite cease-fire efforts at the Berlin conference.

A passenger plane that was scheduled to land at Mitiga Airport had to change course due to the missile attack last week. The airport has been hit multiple times since the start of a monthslong offensive by militias led by Haftar to seize Tripoli from the U.N.-recognized Government of National Accord (GNA) and has been closed and reopened on several occasions.

Since the ousting of late ruler Moammar Gadhafi in 2011, two seats of power have emerged in Libya: Haftar in eastern Libya, supported mainly by Egypt and the UAE, and the GNA in Tripoli, which enjoys U.N. and international recognition.

Libya's legitimate government has been under attack by Haftar since last April, with more than 1,000 people killed in the violence.
Forces loyal to Haftar intensified their attacks last week on Misrata's Abu Qurain area. On Jan. 12, the parties in conflict announced a cease-fire in response to a joint call by the Turkish and Russian leaders. But the talks for a permanent cease-fire deal ended without an agreement after Haftar left Moscow without signing the deal.
Similarly, an attempt of the international community to find a solution to the Libyan crisis in the German capital Berlin on Jan.19 remained inconclusive. Attacks by Haftar forces have continued with no regard for civilian lives.

The U.N. also said Thursday that it was suspending operations at a refugee center in Tripoli, Libya’s capital which is targeted frequently by Haftar forces.

“We fear that the entire area could become a military target, further endangering the lives of refugees, asylum seekers, and other civilians,” said Jean-Paul Cavalieri, the U.N. Refugee Agency chief of mission in Libya.

“With close to 900 individuals entering the GDF spontaneously since July, it became severely overcrowded and is no longer functioning as a transit center,” Cavalieri acknowledged in the statement.

Regarding the conflict in Libya, President Recep Tayyip Erdoğan said Friday that Turkey will not allow the putschists to take control of the country. He added that “those who take the warlords under their protection do not have the right to say a word to Turkey.”
Meanwhile, Russian President Vladimir Putin and German Chancellor Angela Merkel called on the international community Friday to intensify efforts to resolve the Libyan crisis.

In a phone call initiated by the German side, the two leaders discussed the implementation of agreements reached at the Berlin conference on Libya on Jan. 19, the Kremlin said in a statement on its official website.

The Russian president noted the need for coordination with the Libyan parties on the decisions taken, noting the importance of their subsequent consideration and approval by the U.N. Security Council.

"Both sides stressed the need to increase the efforts of the international community in order to ensure a sustainable cessation of hostilities and launch a political dialogue (in Libya)," the statement said.