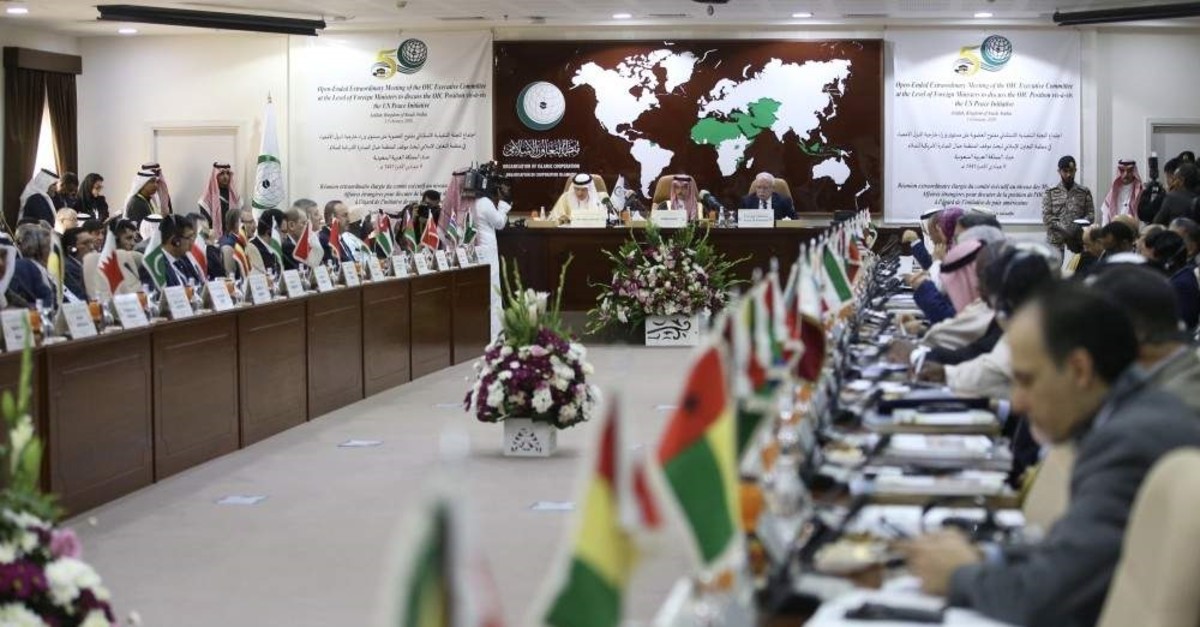 Foreign Minister Mevlu00fct u00c7avuu015fou011flu speaking at the meeting of the Organization of Islamic Cooperation (OIC) in Jeddah on Feb. 3, 2020. (AA Photo)
by Daily Sabah Feb 03, 2020 12:53 pm
The document announced by the U.S. is no peace plan but a plan for annexation, Foreign Minister Mevlüt Çavuşoğlu said Monday, adding that it is a sales document in which the U.S. dictates Israel's maximalist demands.

"The U.S. plan for the Middle East aims to annex, not to bring peace (to Palestine). There are sides who seem to support decisions on Palestine but their actions oppose them," Çavuşoğlu said, speaking at a meeting of the Organisation of Islamic Cooperation (OIC) in Jeddah.

"This document aims to condemn the people of Palestine to Israel's occupation and the pain that is brought together with the occupation forever. It is a plan designed to realize Zionists' and their supporters' most impudent dreams. It is a plan that tries to display the people of Palestine as potential terrorists that have to be isolated under the pretext of Israel's security," the minister added, highlighting that it ignored the vision of a two-state solution while imposing a one-state solution on the Palestinian people.

The minister further indicated that Israel is trying to legitimize the created apartheid state and that Palestinians are humiliated as second class citizens along with it.

"This plan is against all international parameters for the fair, comprehensive and permanent solution of the Palestine issue, especially borders, illegal settlements and the status of Jerusalem and refugees," said Çavuşoğlu.

Çavuşoğlu also underlined his appreciation of the Arab League's rejection of the plan, adding that the league must convey this through a decisive stance toward the U.S.

Saudi Foreign Minister Faisal bin Farhan Al Saud stressed his country's insistence on a comprehensive solution "that guarantees the rights of the Palestinian people to establish a state with east Jerusalem as its capital."

He said Saudi Arabia will back efforts for negotiations to "end the dispute via a comprehensive solution that protects the legitimate rights of the Palestinian people."

Trump last Tuesday unveiled the long-awaited peace plan for the Israeli-Palestinian conflict, although it had already been soundly rejected by Palestinians. Israeli Prime Minister Benjamin Netanyahu joined Trump at the White House for the announcement, with no Palestinian officials present. In a news conference, Trump said Jerusalem would remain Israel's "undivided capital." By accepting the situation on the ground, the U.S. administration gave Israel what it wanted, as the plan for the Middle East does not contain a fully independent Palestine, but a stronger Israel and Gulf against Iran and other threatening elements for the U.S.

The plan deprives Palestinians of nearly everything they had been fighting for: east Jerusalem as their national capital, the removal of Jewish settlements in the occupied West Bank, territorial control over their own borders and the security that a sovereign state would normally enjoy. Trump said east Jerusalem would be the capital of Palestine, while Jerusalem would serve as Israel's undivided capital, noting that Al-Aqsa Mosque would be open to Muslims and that Israel would be responsible for ensuring freedom of religion.
Last Update: Feb 04, 2020 9:14 am
RELATED TOPICS