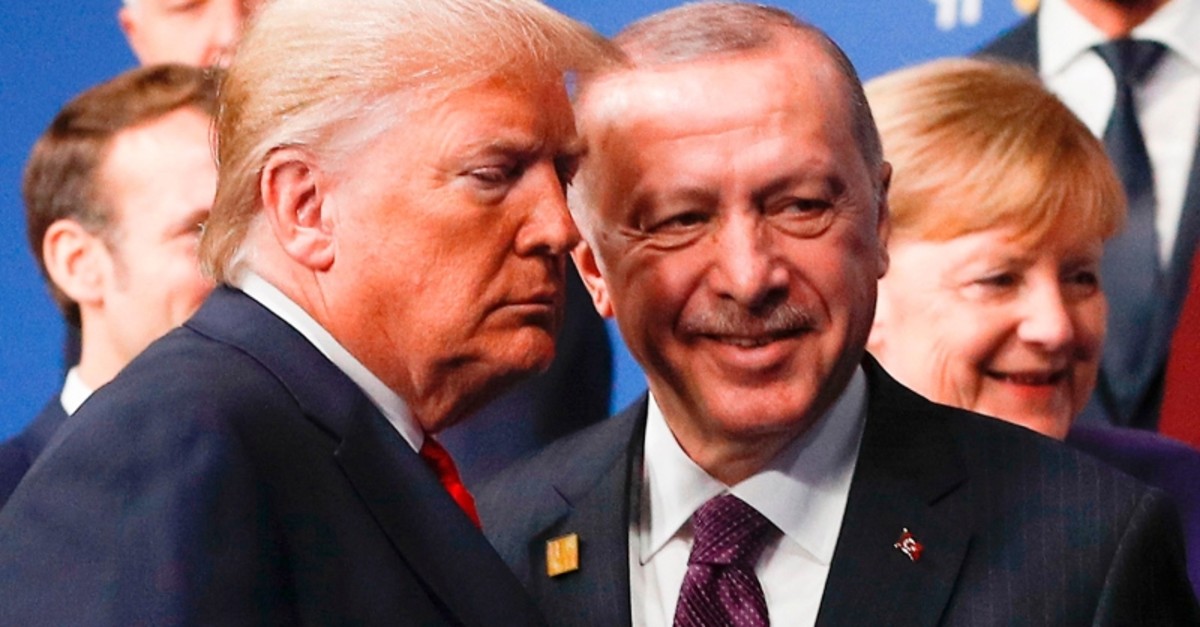 President Recep Tayyip Erdou011fan (R) and U.S. President Donald Trump leave the stage after the family photo to head to the plenary session at the NATO summit at the Grove hotel in Watford, northeast of London on Dec. 4, 2019. (AFP Photo)
by Daily Sabah with AFP Feb 15, 2020 6:29 pm

President Recep Tayyip Erdoğan and his U.S. counterpart Donald Trump discussed regional developments and negotiations to increase the bilateral trade volume in a phone call Saturday, according to the Turkish Presidency.

The two leaders discussed recent developments in Syria, stressing that the Bashar Assad regime's attacks on the northwestern province of Idlib are unacceptable. Erdoğan and Trump also discussed ways to end the crisis in Idlib "without further delay," the Presidency said in a statement.

The situation in Syria has become tenser as Assad intensifies his assault on Idlib backed by Moscow air power.

But more than 1,300 civilians have been killed in attacks by the regime and Russian forces in the zone since then as the cease-fire continues to be violated.

Relations between Turkey and the United States have been strained over multiple issues including Syria but it appears the Americans are trying to capitalize on the tensions over Idlib between Ankara and Moscow.
U.S. special envoy for Syria James Jeffrey came to Ankara earlier this week and voiced Washington's support for Ankara's "legitimate" interests in Syria and in Idlib.
But Turkish Foreign Minister Mevlut Cavusoğlu earlier on Saturday insisted that Turkey-Russia relations "shouldn't" be affected by differences of opinion over Syria.
"The situation in Idlib will not affect the S-400 agreement," Cavusoğlu said, referring to Ankara's purchase of the Russian air defense system criticized by Washington.
The U.S. has threatened to hit Turkey with sanctions over the S-400 deal.

Erdoğan and Trump also underlined the importance of establishing peace and stability in Libya, which has been wrought by a conflict waged by putschist Gen. Khalifa Haftar against the internationally recognized government in the capital Tripoli.

Since the ousting of late leader Moammar Gadhafi in 2011, two seats of power have emerged in Libya – Haftar in eastern Libya supported mainly by Egypt and the United Arab Emirates, and the Government of National Accord (GNA) in Tripoli, which enjoys U.N. and international recognition.

The presidents also agreed to restart negotiations to boost the bilateral trade volume to $100 billion per year.