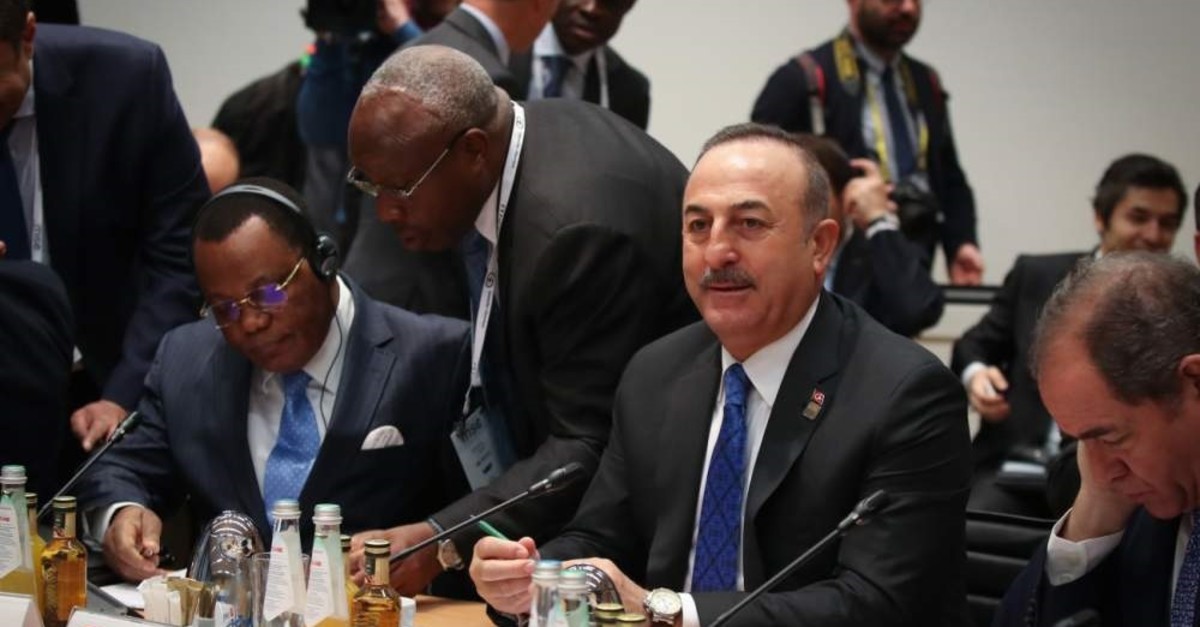 As a follow-up to the Berlin conference, top diplomats met in Munich to reiterate their support for a lasting cease-fire and arms embargo in Libya, following repeated violations in the war-torn country

Foreign ministers and representatives of international organizations concluded a meeting on Libya Sunday with a commitment to the cease-fire and arms embargo, during the Munich Security Conference. Meanwhile, an International Follow-Up Committee on Libya (IFCL) was launched to monitor the implementation of the commitments.

"As Turkey, we have stressed that the only solution is a political one, and to achieve this, (Khalifa) Haftar's aggression and violations must be stopped," Foreign Minister Mevlüt Çavuşoğlu said at the Libya follow-up meeting.

The Sunday morning meeting chaired by German Foreign Minister Heiko Maas and U.N. Special Envoy for Libya Ghassan Salame is the first follow-up committee meeting within the Berlin process of Jan.19, an initiative launched by the U.N. and Germany seeking unity among international actors to support efforts for a political solution and cease-fire in Libya.

"All parties have reiterated the targets of the Berlin conference," Maas said. Italy will host the next international Libya meeting next month to discuss the progress made in implementing the cease-fire and arms embargo, although a date has not yet been specified.

"The arms embargo has become a joke; we all really need to step up here," U.N. Deputy Special Representative to Libya Stephanie Williams told a news conference in Munich.

Saying that those responsible for breaches to the cease-fire need to be held accountable, Williams said: "It's complicated because there are violations by land, sea and air, but it needs to be monitored and there needs to be accountability."

Maas said the next 5+5 meeting between Libyan rivals would take place in Geneva on Tuesday.

The Libyan rivals are also scheduled to hold their first "political dialogue" on Feb. 26.

Çavuşoğlu attended the meeting, along with the foreign ministers of France, Italy and several countries from the region, at the invitation of Maas.

On Wednesday, the U.N. Security Council endorsed a 55-point road map for ending the war in Libya and condemned the recent increase in violence and violations of the arms embargo in the oil-rich North African country.

A fragile cease-fire was established on Jan. 12. At an international summit in Berlin a week later, world leaders agreed to end all foreign interference in Libya and to uphold a weapons embargo. However, there are still near-daily clashes on the outskirts of Tripoli, and weapons continue to flow into the country.

The situation in war-torn Libya is "deeply troubling," Williams said after talks with the foreign minister, adding that over 150 violations had been reported since last month's cease-fire was agreed upon.

"The situation on the ground remains deeply troubling. The truce is holding only by a thread," Williams said on the sidelines of the conference.

"It is the Libyan people that continue to suffer the most. The economic situation continues to deteriorate, exacerbated by the oil blockade," she continued.

Foreign support for eastern-based putschist Haftar only serves to prolong the conflict in the war-torn country, head of the internationally recognized Government of National Accord (GNA) Fayez al-Sarraj warned on Saturday.

"Haftar's supporters must understand that they have lost their gamble" by backing the eastern military strongman, said Sarraj, adding that this support will only "prolong the war and create deeply rooted hatred that will be difficult to overcome."

States including United Arab Emirates, Russia and Egypt have supported Haftar, while the GNA is backed by Turkey, Qatar and Italy.

In the face of constant cease-fire violations by forces loyal to Haftar, Sarraj reiterated also that the Libyan crisis could only be solved through negotiations.

The crisis could be solved politically rather than militarily, but as long as Haftar continues to target civilian settlements, negotiations cannot continue, Sarraj told reporters the same day.

At least 30 people were killed and 33 injured Jan. 5 when Haftar's forces launched an airstrike on the dormitory of a military school in Tripoli, mainly targeting students.

Furthermore, even though the U.N. Security Council adopted a resolution Wednesday calling for a "lasting cease-fire" in war-torn Libya, where a fragile truce has been in place since January, clashes continued the next day with Haftar again targeting civilians.

"We cannot negotiate as long we are being bombarded by aircraft and there is bloodshed and the destruction of infrastructure," Sarraj said.

"Libya belongs to all Libyans. Libyans do not recognize a one-man administration. There is progress in our military capacity, and it will become better; we will reinforce our military institutions by cooperating with friendly nations," Sarraj stated.

Referring to the deal signed with Turkey in November allowing Ankara to provide military training and equipment at the request of the Libyan government, Sarraj said: "We signed the security and military cooperation deal with Turkey open to the public, and its aims are obvious. We did not bring mercenaries to kill people like the opposite side (Haftar)."

Since the ousting of late leader Moammar Gadhafi in 2011, two seats of power have emerged in Libya – Haftar in eastern Libya supported mainly by Egypt and the UAE, and the GNA in the capital Tripoli, which enjoys U.N. and international recognition.