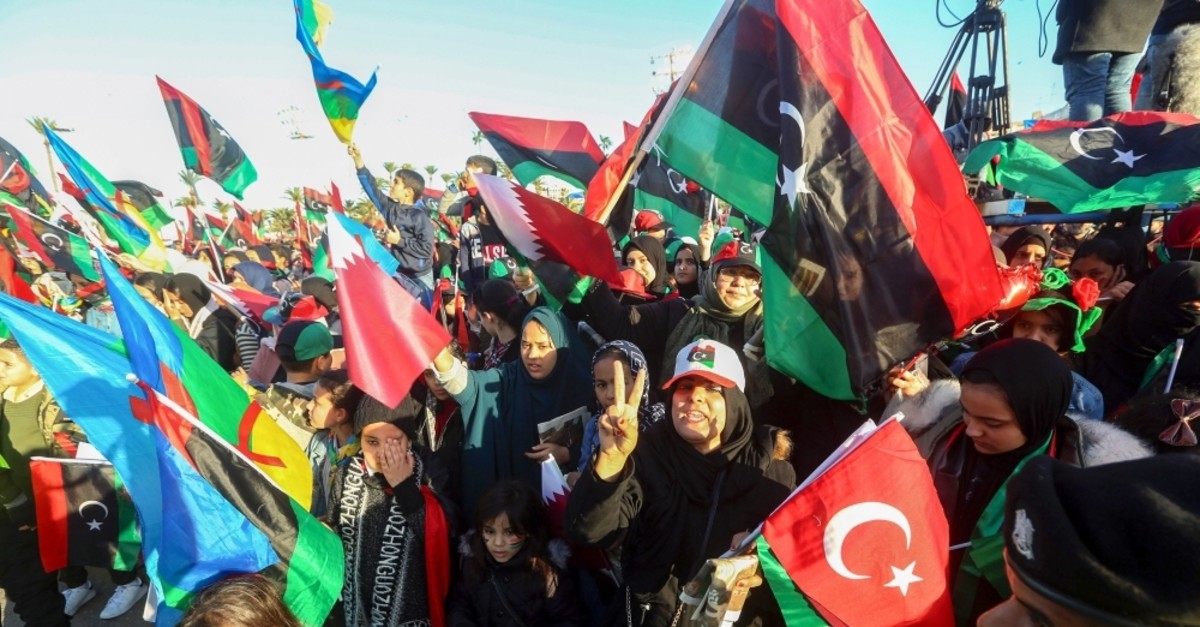 Libyans wave the national flag as they commemorate the ninth anniversary of the uprising against former Libyan leader Moammar Gadhafi, in the capital Tripoli on Feb. 17, 2020. (AFP Photo)
by Compiled from Wire Services Feb 20, 2020 12:15 pm

"The international system could not take a joint action to halt the conflict in Libya. There is also a lack of resolution," Çavuşoğlu told public broadcaster TRT.

Turkey's guarantees in Libya depend on a truce that is upheld by the warring sides, Çavuşoğlu also said, adding that putschist Gen. Khalifa Haftar was violating the cease-fire.

He said a political process in Libya could not move forward while Haftar's attacks continue.

The GNA has been under attack by Haftar since last April, with more than 1,000 lives lost in the violence.

Warring parties announced a cease-fire on Jan. 12 in response to a joint call by Turkey and Russia. But talks for a permanent cease-fire ended without an agreement after Haftar left Moscow on Jan. 14 without signing a deal.

On Feb. 19, the GNA said forces loyal to Haftar killed three civilians and injured five in two missile attacks on the Port of Tripoli.

Following the attack, the GNA late Tuesday announced its withdrawal from the U.N.-hosted military committee talks in Geneva until a determined stance is embraced against the violations of Haftar's forces.

Turkey backs Libya's internationally recognized GNA and has signed a military cooperation agreement to help it repel an offensive by Haftar's forces in the country's east.

World powers agreed at a summit last month to halt hostilities in Libya while a political process is underway.