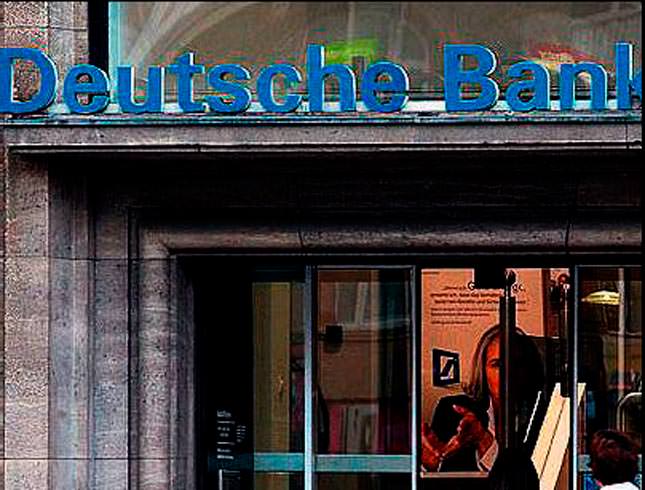 by Feb 26, 2014 12:00 am
Deutsche Bank AG (DBKGn.DE) agreed on Monday to pay $20 million to settle charges in Brazil that Europe's largest investment bank by revenue helped manage funds embezzled by former city of São Paulo officials in the 1990s, a prosecutor said on Monday.

Deutsche Bank is expected to deposit the proceeds from the settlement within the next 60 days, Silvio Marques, a prosecutor in the case, said in a phone interview.

Marques said that more than $200 million from a scheme allegedly run by former mayor Paulo Maluf and other officials moved freely within Deutsche Bank accounts.

Efforts to reach Maluf 's lawyers for comment were unsuccessful. Courts in Brazil and the island of Jersey have found Maluf, currently a lower house lawmaker, guilty for several charges, while other lawsuits related to corruption allegations while he was mayor of São Paulo between 1993 and 1996 are still under analysis. Maluf has repeatedly denied any wrongdoing. "Deutsche Bank is pleased to have resolved this matter after cooperating fully with authorities in their investigation," according to a statement by the Frankfurt- based bank.

Corruption is somewhat of an endemic problem in Brazil, costing the economy as much as three percent of gross domestic product a year, according to several analysts. In recent months, justices at the Brazilian Federal Supreme Court issued rulings on a cash-for-votes case involving the political party of President Dilma Rousseff, which resulted in numerous convictions for fraud and vote buying.

Maluf took bribes and kickbacks when commissioning public work projects while at the helm of the city, a Jersey-based court ruled late in 2012.

Despite a flurry of scandals surrounding Maluf since at least 1981, he is still a popular politician in his stronghold of São Paulo.
According to Marques, more than $858 million in assets controlled by two companies controlled by Maluf 's sons are frozen. Of the about $340 million thought to have been embezzled by the scheme, only $6 million have returned to the country, Marques added.