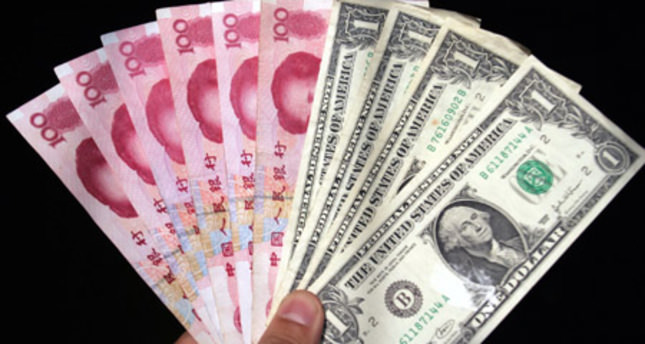 by Feb 27, 2014 12:00 am
China said yesterday that a sudden and unusual depreciation in the value of its tightly-controlled yuan currency was 'normal', but analysts believe the slide could be aimed at speculative funds.

Communist authorities keep a tight grip on the yuan, also known as the renminbi (RMB), as one of their key tools to control the economy, and due to worries about unpredictable financial inflows or outflows. "The exchange rate fluctuations this time are normal fluctuations compared to currency fluctuations in developed and emerging markets, so there's no need to over-interpret it," said the State Administration of Foreign Exchange, which advises the central bank on policy.

The yuan has in the past year steadily appreciated against the U.S. dollar on the nation's foreign exchange market, rising more than three percent in 2013, according to the central bank's monetary policy report for the fourth quarter. But in the past 10 days it has reversed course to weaken around one percent, Australia and New Zealand Banking Group estimated in a research note.

"With the deepening of reform of the RMB exchange rate formation mechanism and putting into use the decisive role of markets, twoway fluctuations in the RMB exchange rate will become the norm," the government statement said. The People's Bank of China now allows the currency to fluctuate daily in a one percent band on either side of a mid-point set by market makers.

But expectations of more flexibility have grown after the central bank earlier this month cited an "orderly expansion" of the trading band as a policy goal.

Analysts said recent depreciation may have been engineered by the central bank to target speculative funds betting on continued appreciation. Yesterday, the yuan closed at 6.1248 to the dollar, rising from 6.1266 the previous day, according to figures from Dow Jones Newswires.