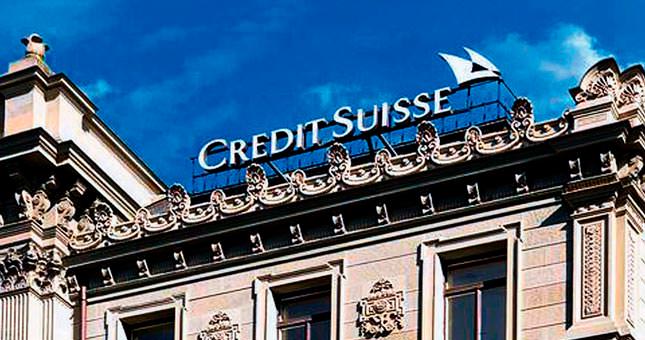 The bank provided accounts in Switzerland for more than 22,000 American clients, totaling $10 billion to $12 billion, according to a report issued Tuesday by the Senate Permanent Subcommittee on ınvestigations. The U.S. government received only 238 names of its citizens with secret accounts at Credit Suisse, totaling only one percent of the estimated total, the investigation concluded.

Credit Suisse recruited Americans to open Swiss accounts from 2001 through 2008 and helped them conceal the accounts from the Internal Revenue Service (IRS), which is the agency that oversees tax collection in the United States. The bank as a whole enabled misconduct by its employees, the subcommittee asserted.

The Senate panel examined the Swiss banks' use of secrecy laws to enable tax evasion by Americans for the past five years. The report on Credit Suisse was the most recent on a series of reports on the issue. Credit Suisse had no immediate comment on the Senate report.
Responding to the report in a statement, the U.S. Department of Justice said it is investigating up to 14 Swiss financial institutions "and we won't hesitate to indict if and when circumstances merit." It did not name the banks. The Senate subcommittee asserted that the Swiss government, with its infamous banking secrecy, continued to obstruct U.S. authorities' ability to learn the names of U.S. bank customers and former customers. The report detailed cloak-and-dagger tactics used by Credit Suisse bankers who were said to travel to the United States to secretly service accounts and recruit customers including at golf tournaments in Florida and the annual Swiss Ball in New York.

Over breakfast at a hotel, one banker handed a U.S. customer bank statements hidden in a Sports Illustrated magazine, the report said. The bank filed visa applications for employees that falsely portrayed them as tourists and maintained a New York office with lists of middlemen who set up offshore shell companies for some U.S. customers, the committee asserted.
Credit Suisse "aided and abetted U.S. tax evasion, not only from behind a veil of secrecy in Switzerland, but also on U.S. soil by sending Swiss bankers here to open hidden accounts," Senator Carl Levin, a Democrat from Michigan and the subcommittee's chairman, said at a news conference Tuesday.

Levin said the Department of Justice failed to use legal tools with Credit Suisse that were used earlier to pry the names of U.S. account holders from the largest Swiss bank, UBS. The department has instead used treaty requests for the names, which rely on Swiss courts and are continuously stymied, he said. "It's time to ramp up the collection of taxes due from tax evaders on the billions of dollars hidden offshore," Levin urged. Justice Department officials, along with four executives of Credit Suisse, including CEO Brady Dougan, are scheduled to testify a subcommittee hearing Wednesday.

In its statement Tuesday, the Department of Justice said that since 2009, it has charged 73 account holders and 35 bankers and advisers with violations related to offshore tax evasion.

The spotlight on Americans' use of Swiss accounts comes amid a debate in Washington over whether and how to raise revenue to help reduce the budget deficit. Many Democrats say the government is missing out on billions because companies are stashing profits abroad to avoid taxes. Republicans want to cut the corporate tax rate and ease the tax burden on money that U.S. companies make abroad to encourage companies to invest at home.
In the UBS case, the Department of Justice threatened the bank with criminal prosecution.
UBS entered a deferred prosecution agreement with the department in 2009 and agreed to pay $780 million in fines and turn over 4,400 names of customers suspected of evading U.S. taxes.

Some of those individuals have been prosecuted. Others have paid penalties and back taxes under an IRS voluntary disclosure program that allows those who come forward pay less than they owe. The program has resulted in 43,000 taxpayers coming forward about their offshore accounts and paying $6 billion in back taxes, interest and penalties, according to the government.
But the department failed to pursue most of the UBS account holders, Levin and Senator John McCain of Arizona, the panel's senior Republican, said at the news conference.

Credit Suisse disclosed in 2011 that it was the target of a criminal investigation by the Department of Justice. Credit Suisse and UBS are on a list of 29 "global systemically important banks" whose failures would be considered a threat to the entire financial system.