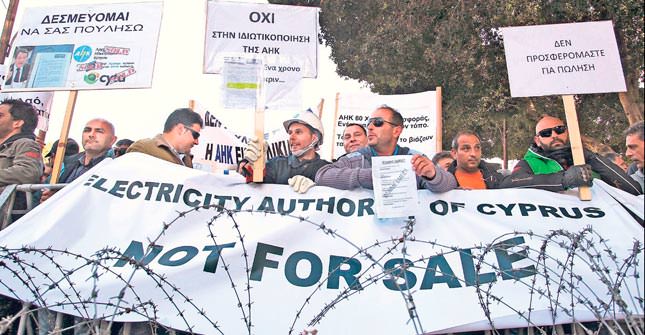 Greek Cyprus parliament vetoed an unpopular law that would have paved the way for the privatization of state institutions on Friday, violating the 10-billion euro bailout deal agreed with the European Union and the IMF

International efforts to bail out Greek Cyprus and its debt-laden economy have been thrown into doubt after its parliament rejected a key part of the plan. As part of the 10 billion euro deal with the European Union and the International Monetary Fund, lawmakers have until March 5 to pass a bill allowing state firms to be privatized.

Members of parliament rejected the legislation on Friday, jeopardizing the next tranche of cash. The deal was agreed in March last year in an attempt to stave off the collapse of Greek Cyprus's banking sector and the wider economy. It included moves to restructure the banks, along with other measures such as tax rises and privatizations.

After the rejection, all 11 cabinet ministers tendered their resignations yesterday to give the conservative president leeway to carry out a wider reshuffle but he asked them to remain at their posts until at least March 15.

The privatization bill was narrowly defeated after parliament split 25-25 on the vote, with five abstentions. This meant the legislation failed to pass. The vote took place as hundreds of people opposed to privatization staged a protest outside the parliament building.

A government spokesman, Christos Stylanides, said the bill would be amended to reflect concerns over workers' rights after privatization. He said the new version would be submitted to the House of Representatives.

Conservative President Nicos Anastasiades, who just last week was boasting of a "new economic miracle" on the island following last year's near-meltdown, echoed the point in a tweet. "I am determined to keep the country on the path of stabilization and recovery," he said.

Stylianides said the amendments would safeguard the rights of staff of the island's ports, power and telecoms utilities which are earmarked for privatization.

Workers of all three held strikes in the past week, drawing condemnation from employers who warned that the unions were dealing a death knell to a recession-hit economy already on its knees. Staff fear there will be layoffs to make the utilities attractive to buyers which will throw them onto the job market.