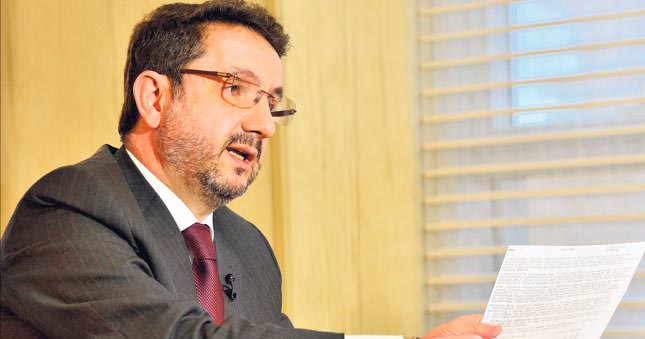 Turkish businessman Abdullah Tivnikli, who testified as part of a graft probe launched on Dec. 25, said Tuesday, fabricated phone recordings were created to target him. "They spliced several tapes to add comments."

Istanbul (Daily Sabah) - Turkish businessman Abdullah Tivnikli, who testified as part of a graft probe launched on Dec. 25, said yesterday, fabricated phone recordings were created to target him. "Those who intercepted my calls tapped me for one and a half years, without finding anything illegal,"

Tivnikli said. "They then spliced several tapes to add comments." Tivnikli, who is the board chairman of one of the largest holding companies in Turkey, Exim Holding, is involved in a corruption investigation launched a week after the Dec. 17 operations that led to the arrests of a number of high-profile individuals.

Tivnikli said fabricating such phone calls was one of the most serious ways to damage Turkey's stability. "Such operations cause repercussions not only in the economy, but also in the social order," he said, highlighting the drop in the value of the Turkish lira after the operations.

He also said he had not received the formal document announcing the court's decision to confiscate his property.

'We will seek our rights against the organizers'

"They tampered with the tapes in an attempt to frame us. Their intention was to create crimes out of the tapes. We have not committed any wrong deeds to be ashamed of, thank God. We are pure. We will claim our legal rights against the organizers of these tapes to the full extent," said Tivnikli.

Tivnikli stressed the wiretaps would hinder Turkish businessmen on the global stage. "We hope that this plan to discredit a businessman, organized with hearsay evidence and words from an illegal wiretap, is not intentional," he said. "How can these businessmen make domestic and foreign investments if they are discredited?"

He also highlighted the economic ramifications for Turkey on the international market. "It is one of the most harmful deeds for our country to tamper with the tapes, to select words, to make various comments so as to disrupt the honor of businessmen," he emphasized.

"The economic outcomes of such interventions are very harmful for both the business world and workforce. To put it another way, the value of the dollar increased by 25 percent. In other words, 25 percent of our resources were eliminated from our budgets as we are all debtors. We will face the cost of these deeds later," said Tivnikli.

'Charges regarding Kalın and myself are totally false'

"They charged me and Ibrahim Kalın after tracking the paperwork found in the prime minister's office," explained Tivnikli. "In recent years, investors were told to get permission from the prime minister in order to invest more than a designated amount of money set by law. We wanted to procure wind measurement masts as part of our upcoming large investment in renewable energy. Each of those masts costs around TL 10,000. We waited over nine months for permission to purchase those masts, which exceeds the legal term. We then made a phone call to the undersecretariat to enquire about the outcome of our request. They had wiretapped the phone call regarding this situation and leaked the tape as if though it was corrupt."

"Before we went to court, we had a feeling we would be asked about Halkbank's land," he said. "Our lawyers worked on it. We told everything to the prosecutor. If the involved people had examined the documents in detail, they would have seen they were unfairly accusing us. The land does not belong to Halkbank but the bank has some shares. There were three enterprises for the assignment of the bank, yet we purchased it as a fourth.

A bargain was made with the owner of the land. Although the tender was announced in newspapers that day, no other companies participated in the bid. So we bought the land as the only company in the tender. We received a court decision informing the annulment of the title 39 days after the sales proceedings. We investigated the document and found it was falsified. We then appealed to the Prosecutor's Office. The Prosecutor's Office reversed the verdict of the local court. The case was then retried."