IMF, eurozone bailouts flow into Greece since May 2010 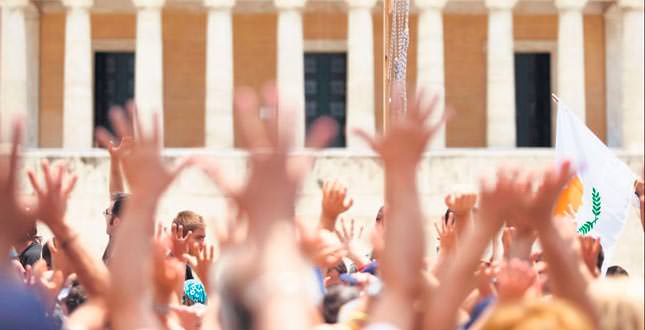 Greece and its international creditors remained at odds over the country's banks' capital needs yesterday, as a breakthrough deal allowing for more aid reached a deadlock

Compiled from agencies - Since May 2010, eurozone member states and the International Monetary Fund (IMF) have been providing financial support to Greece through an economic adjustment program. On May 2, 2010, the Eurogroup established the first program to provide bilateral loans pooled by the European Commission, totaling 80 billion euros (TL 242 million). The funds were disbursed from May 2010 through June 2013.

On March 14, 2012, eurozone finance ministers approved the financing of the Second Economic Adjustment Program for Greece. In total, the second program is forecast to distribute financial assistance totaling 164.5 billion euros until the end of 2014. Of this amount, the euroarea pledged 144.7 billion euros from the European Financial Stability Facility while the IMF is expected to contribute 19.8 billion euros.

The head of the eurozone's bailout funds, Klaus Regling said that 10.1 billion euros that have remained from the financial program for Greece might be released after the Troika's approval. However, discussions between Greece and the troika on Wednesday appear to have reached an impasse over banks' capital needs and certain structural reforms, prompting a new meeting between Prime Minister Antonis Samaras and Deputy Premier Evangelos Venizelos.

Marathon talks between governmental officials and the troika over the weekend made progress in some areas but the two sides remained far from an agreement, sources indicated, stressing however, that the goal remained to reach a deal before next Monday's Eurogroup summit.

The second meeting between the inspectors for the country's international creditors and Greek Labor Minister Yiannis Vroutis, held on Tuesday, ended without a decision being reached. According to a high-ranking official at the ministry, the negotiations are ongoing as the two sides seek a compromise on the right of employers to order mass layoffs and reduce the size of their employees' social security contributions.

According to reports, the two sides have reached a preliminary agreement on measures concerning the social security contributions.
There are contradicting opinions though as to the precise application of it and to the funding gap that will occur for insurance organizations in Greece.

Meanwhile, Bank of Greece Governor George Provopoulos and the troika completed a second round of talks over the additional capital needs of Greek banks on Tuesday, without reaching an agreement.

Government sources said that the two sides insisted on different estimates over the capital needs of the country's four systemic banks, with the Bank of Greece estimated these needs at about 6 billion euros, while the IMF has insisted on higher estimates.

The Bank of Greece will proceed, unilaterally, with the release by the end of the week of the results of a stress test report conducted by BlackRock, a multinational investment management corporation located in New York City.