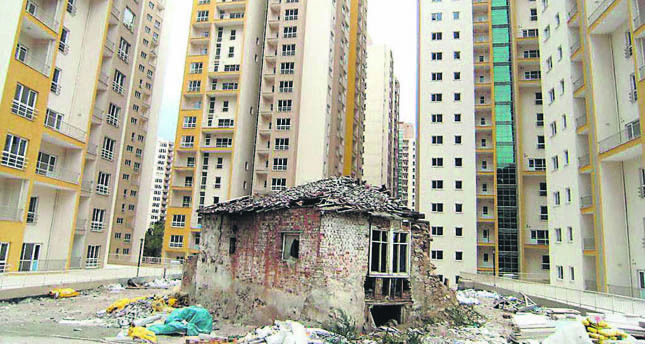 As part of the government's nationwide urban renewal plans, authorities will either demolish or improve a total of 600,000 buildings that are vulnerable to earthquakes by the end of 2014

Urban transformation was first introduced in Turkey in 2004 as an initiative to renew slum areas and reinvigorate shantytown settlements.
Urban transformation can also be used to protect people against possible disasters, including protecting residents against earthquakes. According to officials, the government is expecting to either demolish or improve a total of 600,000 buildings that are vulnerable to earthquakes as part of a nationwide urban transformation project by the end of 2014.

The most recent impetus for the current urban regeneration program was the 7.2-magnitude earthquake that struck the southeastern city of Van in October 2011. Previous earthquakes have been even more deadly - a 1999 quake in İzmit killed 17,000 people and a Japanese study predicted that 90,000 people could die if Istanbul were hit. In the wake of the disaster, which revealed the shoddy construction of many of the city's buildings, Prime Minister Recep Tayyip Erdoğan promised to demolish illegal and unsafe buildings across the country and replace them with sturdier, safer ones.

According to specialists, however, such a project will require the demolition of 6.6 million houses across Turkey, approximately one third of the country's 20 million residences.

In Istanbul, the ratio is even more worrying. More than half of the city's four million homes are in danger, with most of the compromised structures concentrated in the western European side.

In addition to being utilized to ensure buildings are able to withstand earthquakes, urban transformation is dedicated to creating and implementing comprehensive revitalization programs in neighborhoods. In general, it is the re-handling of urban development through social, economic, and spatial aspects.

According to Burhan Özdemir, contractor and chairman of the Construction Sector Commission of the Independent Industrialists' and Businessmen's Association (MUSİAD), the idea of urban transformation was initially based on the restoration of buildings and slums that spoil the panorama of Istanbul. Those were neighborhoods positioned close to city centers and around the main areas of the city. Among these were the Kadıköy and Ataşehir districts along with slums in Gazi Osman Paşa.

The 2011 Van earthquake changed this approach, he said. Based on the idea of modernizing the living spaces that spoil the silhouette next to the city, urban transformation suddenly converted to a total transformation project that sought to reconstruct all unreliable buildings throughout turkey.

To prevent the agonies of the 2011 Van earthquake from reoccurring, Özdemir said, urban transformation must be put on the agenda. "In addition to extensive projects that cover large areas, the destruction and reconstruction of unhealthy, uninhabitable and unreliable buildings on side streets were taken into the scope of urban transformation," he added.

A high-ranking officer from the Ministry of Environment and Urban Planning noted people living in transformed areas would not be removed. On the contrary, steps would be taken to enhance the living standards of people in these areas and the value of these properties would increase.

"It is a necessity to rescue Istanbul, the favorite metropolis of Turkey, from the yoke of unplanned urbanization and ruinous buildings," said Özdemir. "Besides, Turkey has a vast young population, which means that demands will increase. If new areas are zoned for housing to meet the demand, nature will see harm. Moreover, infrastructural investments will become a huge problem. As an alternative, more modern, safe and high-rise buildings may be built instead of the low-rise buildings built in city centers dozens of years ago. Thus, they will both be more economic and marketable. It is quite obvious that the further away from the city center, the lower the value, which can discourage investors."