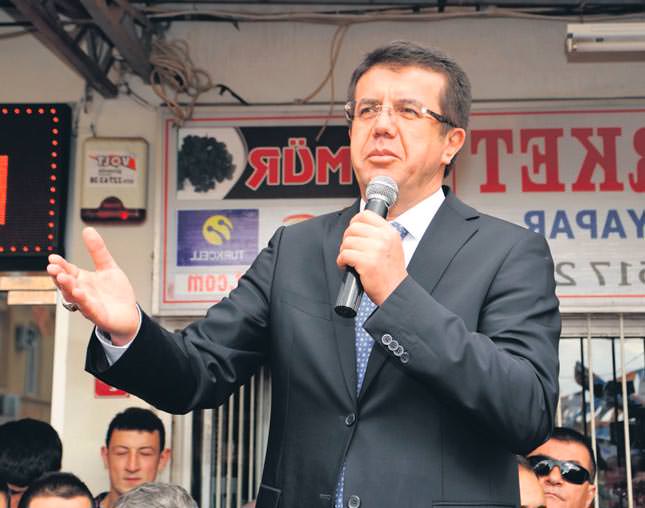 The Customs Union Agreement with the EU poses a great risk for the Turkish economy in the near term unless it's fixed, said Zeybekçi

Istanbul - In a speech during a meeting with businessmen in Uşak, Economy Minister Nihat Zeybekçi addressed issues surrounding the Turkish economy, including free trade agreements (FTAs) with developing and emerging economies. In addition to ongoing negotiations about an agreement with India, he said Turkey signed a FTA with Malaysia and has taken important steps in the negotiation of an agreement with Singapore. "We put importance on FTAs with third world countries," said Zeybekçi. "New agreements will come into force.

However, the Customs Union Agreement signed with the EU in 1995 has affected Turkey in a negative way. "The Customs Union Agreement between the EU and Turkey is actually an economic partnership," he continued. "Following this agreement, the EU adopted a free trade policy. When the EU signs a free trade agreement with a third world country, the country is eligible to have the same rights as the EU on the Turkish market. As an example, there is a free trade agreement between the EU and Algeria. It is possible for Algeria to import its goods to Turkey. However, Turkey has no right to import its goods to Algeria.

The EU does not force Algeria to sign a free trade agreement with Turkey, but rather advises. This situation cannot be accepted by any sovereign country, and we have raised an objection." Stating that Turkey negotiated the Customs Unions Agreement with the EU, which agreed the situation unsustainable, Zeybekçi said, "The current situation has affected us unfavorably. There will be big waves coming out. The EU and the U.S. have started to negotiate on a broader economic partnership. Presumably, they will sign an agreement within two years. If the Customs Union Agreement between the EU and Turkey continues to be effective, Turkey will suffer, and feel hard done by. We foresee this as a big threat for our country." Zeybekçi added that Turkey can meet the raw material and energy demand for the next 50 and 100 years from nearby countries.

Adding that it is important to reach the export targets and continue to develop, Zeybekçi said an excessive appreciation of the Turkish lira will adversely influence exporting. Emre Gönen, international relations instructor at Bilgi University, stressed that it is impossible for Turkey to cancel the agreement with the EU. "However, the current agreement needs to be revised because the Turkish economy is stronger compared to in 1995 when the Custom Union Agreement was signed," said Gönen. "EU countries fail to cooperate with Turkey when they come on the verge of new FTA or Custom Union Agreement with third countries. In this manner, Turkey's complaints are fair. Both sides should take into consideration the interests of each other."