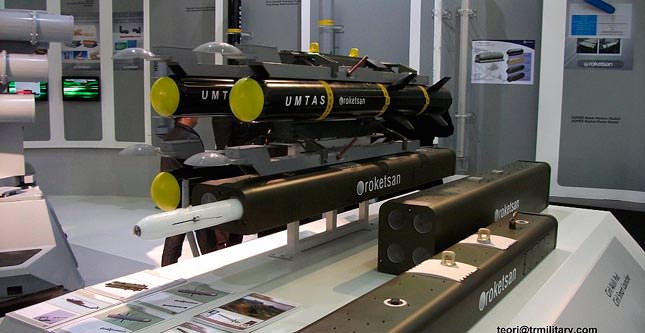 Turkey's defense sector ranks eighth in the world in arms exports, but aims to overtake Italy's global ranking as sixth

Istanbul - The Turkish defense industry exports $1.4 billion (TL 3.11 billion) worth of arms each year but now it has its sights set on being one of the world's top defense exporters. Turkey's defense sector, which currently ranks eighth in the world in arms exports, is aiming to find foreign buyers for $2 billion worth of arms and overtake Italy's global ranking as sixth.

Latif Aral Aliş, head of the Turkish Defense and Aerospace Industry Exporters Association said that "75 percent of the world defense industry is in the hands of six countries. [Turkey] now outpaces Spain which is [mired] in crisis. We are striving for the rank of Italy, [while keeping in mind] that the target for 2023 is $25 billion...We are doing well in large projects like helicopters and marine vessels. We make $500 million of R&D investment annually, yet we have many products at hand waiting to be exported."

Aliş said that the Turkish defense industry exceeded their domestic production target by 50 percent in 2013 and their aim is to exceed 70 percent over the next 10 years. At the IWA light weapons fair held from March 7-10, Latif Aral Aliş noted that the number of Turkish companies in the sector has increased with 66 companies participating in this year's gathering as opposed to 52 last year.

"This fair is where light weapons and hunting or sporting weapons are promoted. We have beat out the Spanish in this sector. However, Spain was among the leaders together with the United States, Italy and Germany up to now. We have come to the fore with price-quality advantage."

Aliş also discussed the latest developments concerning the Defense and Aerospace Industry Promotion Group, which was formed four months ago. "We will use 90 percent of the budget abroad. Our target is to focus on the rapidly-growing Asian market which is still intact. We will participate in the fairs in Malaysia, Indonesia, India, Pakistan, Bangladesh, Sri Lanka and the Philippines and arrange bilateral committee visits. The purchase of weapons is rapidly stepping up in these countries with a growth rate of 30 percent annually," said Aliş.