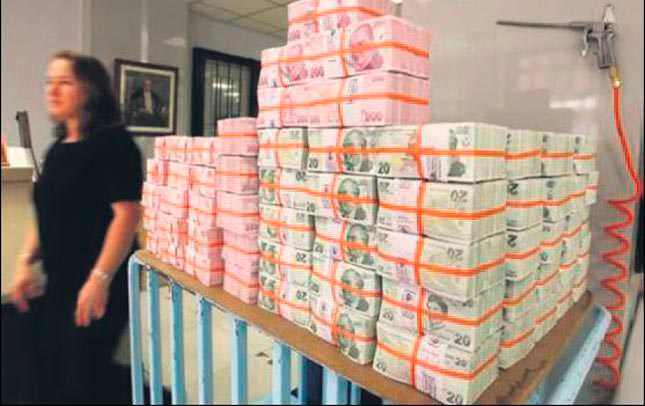 by daily sabah Mar 13, 2014 12:00 am
ISTANBUL – In the bonds-bills market yesterday, the benchmark of compound interest started the day at about 11.34 percent. Due to the devaluation of lira, the compound interest rate reached 11.45 percent by the end of the day.

Yesterday, the compound interest started the day at about 11.60 percent.

The compound interest has reached its highest level since June 17, 2009 on account of the exchange rate against the dollar, which is 2.25 lira.

Financial experts have stated that there has been no appreciation in the lira and there is a low probability that there will be a downward movement in the compound interest of benchmark bond in the short-term.

Garanti Investment Strategist Tufan Cömert noted that the devaluation of lira will primarily influence compound interest rates. "The Turkish Central Bank previously released TL 29 billion to the market. However this figure is now only TL 26 billion. We have already been experiencing a lack of liquidity in Turkish lira. On account of the fact that the Turkish central bank provides less liquidity, there has been an upward movement in interests."

Noting that the volumes of the bond and bills market are low, and this decline will presumably continue today, Cömert added, "The devaluation in the lira is being controlled by the liquidity policies of the Turkish Central Bank. In following periods, this strategy may increase interest rates. It is possible we will see the compound interest of benchmark bonds around 12 percent and above. Considering the real interest rate calculations, the compound interests around 12 and 13 percent are believed to be the most preferable levels.

Therefore, local investors and notably the private banks will be on the side of acquisition within a 12-13 percent compound interest. Will there be any withdrawals? In order to answer this question, there should be an appreciation in Turkish lira. However, considering the general view, I do not think there will be a downward movement if there is not any appreciation."