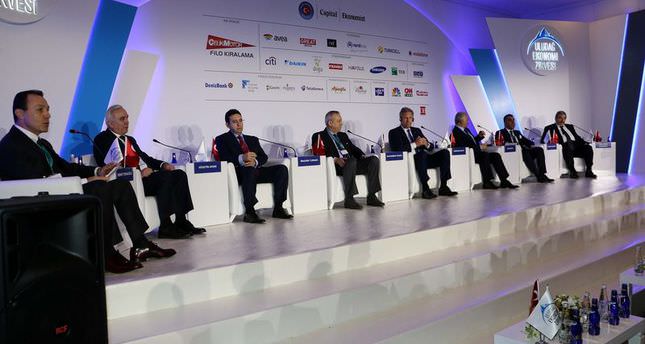 ISTANBUL — Local and foreign officials gave Turkey's future economic prosperity two thumbs up, voicing their confidence in the country's efforts to catch up to the West on Saturday during the final day of the two-day Uludağ Economic Summit, seen as the Turkish version of the World Economic Forum held at the Swiss-resort town of Davos. Former German President Christian Wulff and Turkish Finance Minister Mehmet Şimşek were accompanied by CEOs and executive managers of the world's leading companies, banks and nongovernmental organizations at the summit held in the western province of Bursa.

Speakers in three different sessions shared their views on the Turkish economy and future scenarios the Turkish economy may face. "The last ten years were quite good," said Şimşek. "We are catching up with Europe and the U.S. What will be distinctive in the future will be the quality of institutions, demographic structure and efficiency." Şimşek also discussed Turkey's energy outlook, stating "I believe Turkey will be one of the countries that actively applies solar energy. However, nuclear energy is also inevitable as we cannot rely solely on renewable energy. This year a drought is a possibility," added Şimşek.

"It did not snow much and the situation with our dams is obvious. The amount of energy we produced in our hydro-electric plants was one-third of what was produced the year prior. Now, how can we say 'We do not want nuclear energy?'" He noted France gets about 80 percent of its electric energy from nuclear plants, and Europe as a whole gets 35 percent from nuclear plants. "It is not correct and healthy to stay away from nuclear power," he continued.

Şimşek pointed to the Global Competitive Power and Index by the World Economic Forum and said, "We ranked 71st among 117 countries a few years ago, while now we are 44th among 148. We are better than many developing countries except China. There is also improvement in the business convenience index."

Şimşek touched on the general outlook of the economy, by stating, "Our economy faced a few shocks in the past and knew how to deal with it. We are strong. The trend is up, which I say with all sincerity," said Şimşek.

Turkish Airlines CEO Temel Kotil emphasized the third airport in Istanbul is of the utmost importance and said, "When it is completed, Turkish Airlines and other companies will operate more comfortably. More importantly, big Asian transporter companies which cannot fly to Istanbul will use the hub to connect to Europe and Asia. There are no available landing slots in Istanbul at present due to the overcrowding of the airports present. Once the third airport is in operation airways in Japan, including JAL, ANA and Air China will prefer Istanbul."

On objections by Germany about potential route changes, Kotil said, "This is trade. Everyone can do whatever they wish. But I know that a high-quality airline company such as Cathay Pacific in Hong Kong, wanted to fly to Istanbul. Their request was rejected as there was no room. This is unfair for that company. Thus, the company flies to Frankfurt instead. Istanbul would be an eligible destination for them as no matter what they say, Istanbul is becoming the center of the world."

Former German President Christian Wulff addressed Turkey's accession process to the EU and the country's economic structure. "By 2023, Turkey will be a country that has completed the accession negotiations, realized all the necessary deeds and will be a nation with European standards." After expressing his support for Turkey's accession, Wulff said, "Turkey seems more important with regard to countries facing difficulties, such as Crimea, Ukraine, Russia and Syria. Turkey is on the juncture of the West and the East, which is manifested in the efforts by Turkish Airlines. Most of Turkey's population consists of Muslims. The country has a sound democracy. There is confidence in banks, the Turkish currency and state of law. Turkey is attractive. People are now returning to Turkey. As a matter of fact, they do not want to migrate in the first place. They want to come to Turkey in order to be a part of the growth here."


Muharrem Yılmaz, the chairman of the Turkish Industry and Business Association (TÜSİAD), discussed Turkey's economy over the long run. "I think that we are going through very hard times in terms of the relation between democracy and market economy. However, I hope these troubles will be overcome with the three elections scheduled in the near future," said Yılmaz.

He added that potential growth of the country could be increased by one to two points in addition to the current four to five unless significant mistakes are made. He envisages that the global average could even be exceeded.

Hüseyin Aydın, the chairman of the Banks Association of Turkey (BAT), said as long as political and economic stability are maintained, international finance will keep coming to Turkey.

Noting the strength of the sector, despite recent events, Turkish banks can control pricing ranges. Aydın highlighted the transformation and disciplining regulations the Turkish banking systemhas undergone and stated, "The share of credit in financial statements reached 60 percent by doubling in number from the early 2000s." Aydın expressed his satisfaction with the quality of human resources in the sector and said, "We use technology very well. Our systems and employees can handle every possible bad scenario as we did during the global crisis in 2008."

Allianz Insurance Western & Southern Europe board member Oliver Bate said Turkey was an important country and his company would continue to invest in Turkey. He also said, "We believe in Turkey. We are aware of the temporary uncertainties but we are not afraid of the risks."


International investment expert, editor and publisher of "The Gloom, Boom & Doom Report" Marc Faber said global production has moved into rising economies since the year 2000 and Turkey is one of them. Faber noted that while the demand for crude oil has decreased in the West, it is increasing in rising economies and added, "Although market performances in stock markets are not very good, I can say that the condition of a typical household in rising economies is better compared to 20 years earlier."