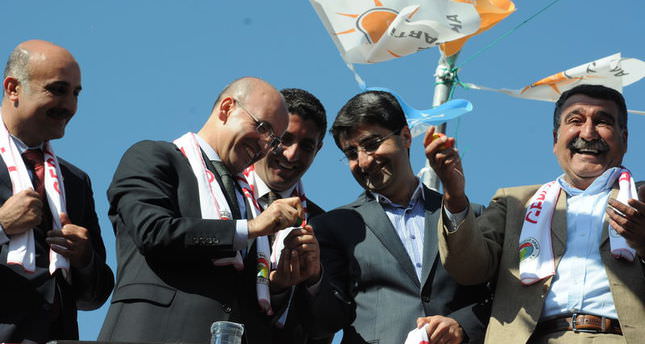 ISTANBUL — Turkish Minister of Finance Mehmet Şimşek said if the ruling Justice and Development Party (AK Party) receives more than 40 percent of the votes in the local elections this Sunday, prospective uncertainties regarding the presidential election in August 2014 will be limited.

Speaking to supporters during a rally in Batman, Şimşek said, "If the AK Party gets 40 percent or more of the vote, it means the uncertainty regarding the presidential election will have a limited effect on the economy," said Şimşek. "As such, the risk of diminished growth would be based on monetary tightening. In the case of monetary tightening, real interest rates are relatively lower even though nominal interest has increased."

He emphasized the importance of trust in the Turkish government and economy. "In the past, Turkey achieved growth despite high interest rates…One can explain this by trust, stability and positive expectations. That is why I care about the election on March 30."

"If the election eliminated political uncertainty, the risks to growth would be limited to monetary policy and a slowdown. If the elections bring political instability, risks will increase and a revision of the growth rate may be made. If the election result indicate political stability contrary to rumors, Turkey will implement further reforms to enhance its economic structure," Şimşek said.

The minister noted the contribution of public investment to national income in terms of growth is extremely limited, yet the government will use instruments of financial policy if needed. "If we happen to have to support the economy, we have the ability to maneuver in fiscal policy. We can use it wisely. However, I do not think we need it for the time being," he said.

Şimşek said the government has been very cautious regarding the use of fiscal policy and does not want a double deficit. "We made highly limited and selective reductions in sectorial taxes in 2009, which proved to be successful. We are not revisiting it on the agenda for the time being," he said.

Stability together with reform is the key to success, said Şimşek, stressing that the initiatives to make it more difficult to wiretap and the abolition of special courts were significant steps toward this end. The minister said Turkey should be made more transparent and accountable. In order to do so, he said the government was looking forward to revisions in campaign finance regulations.

Şimşek said the government does not foresee a serious disruption in trends in the budget and added that its target of 1.1 percent deficit of gross domestic product (GDP) in the general state budget can be achieved.

The international credit ratings institution Fitch declared yesterday that Turkish companies are among the most affected by stress in Europe, the Middle East and Africa. The finance minister emphasized that the fundamentals of the economy are strong, saying the company's analysis was based on artificial evaluations. Şimşek pointed out that the state has a net foreign exchange surplus, the banking sector does not have a foreign exchange deficit and the household-owned funds provide a foreign exchange surplus of more than nearly $190 billion. "Turkey is not as fragile as it seems from the outside," said Şimşek.
Last Update: Mar 26, 2014 2:52 pm
RELATED TOPICS