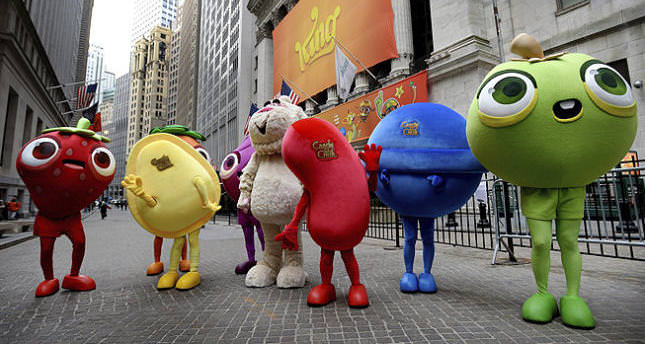 by French Press Agency - AFP Mar 26, 2014 12:00 am
SAN FRANCISCO — King Digital Entertainment raised a sweet half billion dollars on Wall Street and now it is time for the market to show its taste for the makers of mobile game Candy Crush. The British game developer priced its initial public offering (IPO) at $22.50 per share on the eve of the start of public trading Wednesday on the New York Stock Exchange. King will trade under the ticker KING with an opening market valuation of $7.1 billion.

The money raised could reach $574 million depending on demand for an additional 3.33 million shares that could be issued underwriters, the company said. King's arrival on the stock market comes as investors are keen to buy into the next Internet star but wary of young companies being overvalued, especially in the world of games where popularity can be fleeting.

Established in 2002, King's business soared in the last two years thanks to the spectacular popularity of Candy Crush Saga, which boasts some 97 million players worldwide. The Tetris-like format requires players to line up sweets and bonbons through 500 increasingly difficult levels. But the addictive qualities of Candy Crush and the company's ability to monetize by getting users to pay extra to help them advance through levels underpin the sky-high valuation. The company says its games, which also include Farm Heroes and Pet Rescue, are installed on 600 million mobile devices, and played over 1.4 billion times a day, more than one billion alone for Candy Crush. Profits in the fourth quarter reached $159 million.

However, analysts cautioned that King's longterm earnings viability remains questionable owing to its business heavily reliant on a single product. Research firm PrivCo notes that King itself estimates the average lifespan of a paying player on a particular game at two to nine months.

Given that much of the growth in Candy Crush subscribers ended in the first quarter of 2013, "Many of the paying players on Candy Crush will soon reach the end of their estimated playing period," PrivCo said. Analysts have noted that Zynga, creator of the once-mighty FarmVille game, lost 40 percent of its value after entering the market in Dec. 2011 with a valuation of $7 billion.

Zynga pioneered online social gaming at a time when Facebook was center stage and got caught on its heels when players enthralled by free play on smartphones or tablets flitted away from the San Franciscobased company's titles. "Zynga was a pioneer in its space," said longtime game industry analyst Scott Steinberg, now general manager of Phoenix Online Studios. While no one can predict how long a game will be a hit, Candy Crush has shown staying power. And King has the benefit of learning from Zynga's woes. Candy Crush started life as a Facebook game in 2012 but can also be played online and on smartphones. In a move that encourages players to spread the game, Candy Crush lets people call on friends or family on Facebook to download the game and help them advance.