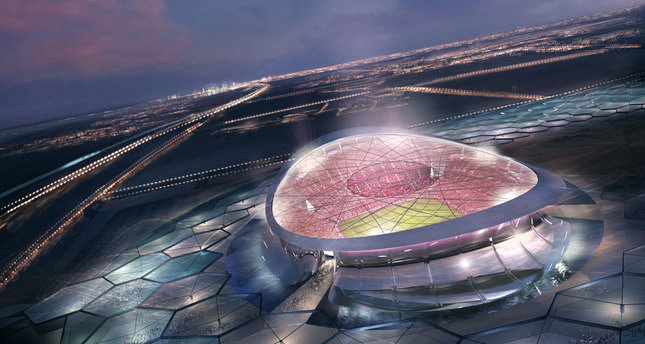 DOHA — Pushing ahead with a massive infrastructure drive in preparation for hosting the 2022 football World Cup, gas-rich Qatar unveiled a record budget of almost $62 billion Qatar plans to increase government spending to a record level. The emir, Sheikh Tamim bin Hamad al-Thani, approved a budget of 225.7 billion riyals (TL 134.4 billion) for the 2014-2015 fiscal year, up 3.5 percent from last year, said Finance Minister Ali Sharif al-Emadi. The budget is "the largest in the history of the state of Qatar," stressed al-Emadi.

The budget for the Qatari fiscal year running from April 1 to March 31 is based on an oil price of $65 per barrel. The projected budget assumes a deficit, but it is based on a relatively low oil price so actual revenues may be higher. Oil is currently trading at more than $100 a barrel.

Qatar expects 6 percent economic growth in 2014 and a 3.7 percent increase in this year's expenditure, rising to 218.4 billion riyals. "Most of the increase in 2014 to 2015 expenditure estimates was directed to complete and implement development projects," the minister said, quoted by the official news agency QNA. He said 87.5 billion riyals were allocated for key projects. "The budget allocated enough funds for investments in the health and education sector, as well as for the execution of mega infrastructure and transport projects such as the rail projects related to the preparation for hosting the 2022 World Cup," he said.

Qatar is likely to reschedule 15 percent of its planned building projects for the coming years and go over budget, sources familiar with government policy told Reuters earlier this month.

Investments in health, education, infrastructure and transport rose to 54 percent in the 2014/2015 budget, compared to 48 percent last fiscal year.

Data earlier this month showed Qatar's government spending rose nearly 33 percent in the first half of this fiscal year, speeding up after a slow start to World Cup 2022 projects. Difficulties in planning, coordination and arranging the necessary resources, as well as bureaucratic obstacles, delayed state spending in the past. Analysts polled by Reuters in January forecast the OPEC member's fiscal surplus at 9 percent of gross domestic product in 2013/14, shrinking to 5.9 percent in the coming fiscal year.