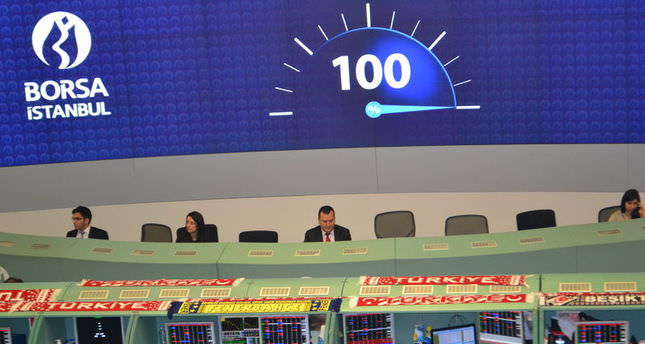 A vote of confidence for the ruling Ak Party in recent elections is seen as continued stability in the markets, pushing stocks to four-month highs

ISTANBUL — The Turkish economy, which is one of the most promising among emerging countries according to experts, has experienced two shocks from May to December in 2013. The first shock the Turkish market faced was the Gezi Park protests in May, which caused Turkey to lose more than $150 billion (TL 314 billion) in total according to Numan Kurtulmuş, the vice president of the AK Party.

Within two months after the Gezi protests, Turkey's stock market, Borsa Istanbul (BIST), shrank by nearly 20 percent and the index fell to approximately 72,000 from 90,000. In the same period, the Turkish lira also lost nearly 25 percent value against the U.S. dollar, which reached TL 2.1 from TL 1.75 and the compound interest rates of the central bank increased by 300 basis points and climbed to 6.5 percent from 3.5 percent. The second shock was the Dec. 17 operation, which aimed to cause an economic storm and destabilize Turkish politics.

After the operations, interest rates soared to 12 percent, the U.S. dollar reached TL 2.32 and BIST reached a historic low at 61,273 points.

Despite increased political tension with the wiretapping of thousands of people and the Dec. 17 operation, the campaign to cause chaos in Turkey failed to reach its economic goals. A positive atmosphere in the markets, which began ahead of local elections and continued after the elections, proved that foreign investors have not given up on Turkey's markets.

BIST, which lost more than 30 percent in value and decreased to 61,000 after the two shocks, has been recovering its lost value.

Experts say international and national investors re-entered the market after local elections held on March 30, which resulted in the AK Party's decisive victory and the removal of political uncertainties in the country. BIST is now only 2 percent behind its position prior to the Dec. 17 operation.

In a statement to a Daily Sabah reporter, economist Kerem Alkin said that if the current political atmosphere is maintained in the upcoming periods, both interest rates and the dollar will decrease. He further said the current situation should be carefully followed and it is important to avoid overvaluation of the Turkish lira. Pointing out that exporters may be adversely influenced, Alkin suggested that Turkey should follow a decisive money policy.

Economist Cemil Ertem highlighted that compound interests declined to a historic low in recent months and fell down to onedigit figures.

Even though Prime Minister Recep Tayyip Erdoğan's statement regarding the interest rates was received prudently by the central bank, actors in the market withdrew their money from interest accounts assuming that interest would decrease and be returned to the stock market. This situation enabled the Turkish lira to gain value while the dollar and euro lost value.

Positive data about industrial production announced today and the downward trend of interest rates show that the real sector will make further investments and will grow better in the upcoming days.

Economist Dündar Demiröz also made a statement to Daily Sabah about the recent incidents in Turkish economy and money markets.

Demiröz said interest rates are determined by the influence of two variables, one with real-sector basis and the other with speculative basis. Demiröz commented that both variables of the election results and the following industrial production and growth statistics are headed in a positive direction for the Turkish economy. "Namely, speculative changes caused by political uncertainties are eliminated by the election results," said Demiröz. "Besides, positive data about the Turkish industry refreshed the trust of the real sector. I think that the dollar will be just slightly above or below TL 2 until the upcoming presidential election. However, I am sure that global financial shrinkage will increase the value of the dollar near the end of the year. I do not find it true that the central bank conducts a hundred percent independent monetary policy." Demiröz concluded that the economic agenda of the politicians and the central bank should proceed in parallel with each other.
Last Update: Apr 08, 2014 8:45 pm