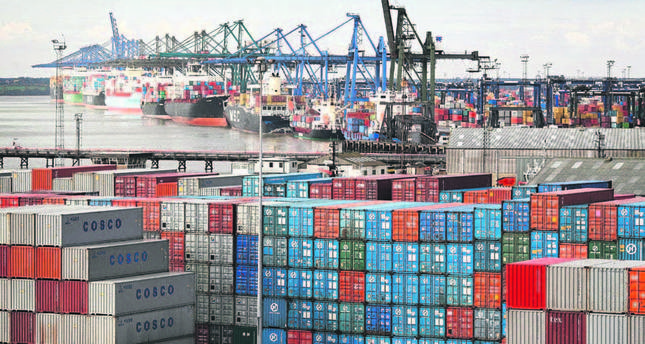 Turkey's current account deficit, seen as a major weakness in the economy, narrowed by $2.779 billion to $8.121 billion in the first two months of the year, according to figures released by the Turkish central bank

ISTANBUL — According to data released by the Central Bank of the Republic of Turkey (CBRT) yesterday, Turkey's current account deficit maintained its downward trend. The current account deficit was $8.121 billion (TL 17.23 billion), down $2.779 billion over the two-month period from the previous year. The decrease is mainly because of a decline in the foreign trade deficit, with the balance of payments at $8.822 billion and an increase of $447 million in services surplus, reaching $1.770 million in the first two months of 2014.

Non-monetary gold items recorded a net export of $413 million in the first two months, in contrast to a net import of $727 million recorded in the same period of 2013. Tourism revenues increased by $160 million over January and February 2013, reaching $2.536 billion, and travel expenditures increased by $39 million to $748 million.

Net outflows from the investment income item increased by $85 million over the same period of 2013, reaching $1.109 million. Non-residents' net direct investment in Turkey was $2.377 billion, increasing by $514 billion over January and February 2013, while residents' net direct investment abroad was $583 million, up by $68 million during the same period. Nonresidents' equity security transactions resulted in net sales of $403 million for the two months, including net sales of $84 million in February.

In regards to government domestic debt securities, non-residents realized net sales of $2.176 billion in the two months, including net sales of $1.071 billion recorded in February.