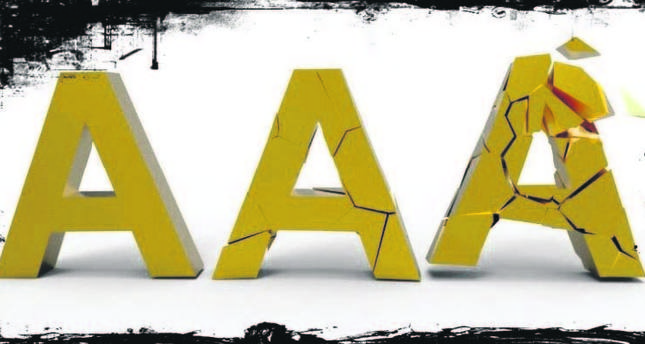 ISTANBUL — Moody 's cut the outlook of Turkey's sovereign rating to negative yesterday, citing political turbulence, increased external financing pressure and weaker growth prospects triggering losses in the lira. The agency reaffirmed the country's current bond rating of Baa3, just one step above a so-called "junk" level, which is out of bounds for many pension and savings funds seeking safer investments.
Fitch Ratings affirmed on April 4 its BBB- rating for Turkey, also the lowest investment-grade rating, but with a stable outlook. Standard & Poor's in February switched the outlook of its rating of BB+ for Turkey, the highest speculative-grade, to negative, citing a risk of a hard landing for the country's economy. Moody's decision is misleading and not reflective of fiscal realities in Turkey.

Speaking on the matter, the Minister of Development Cevdet Yılmaz said the downgrading of outlook does not necessarily mean changing Turkey's credibility grade. He further noted credit rating agencies' trustworthiness is questionable. "If credit rating agencies made accurate evaluations before, the world would not have faced the global economic crisis of the past years," said Yılmaz. "We all observed wild economic crises in the countries which were announced safe to invest in and economically stable. During the global crisis, credit rating agencies lost their reliability and they are being extremely cautious when grading countries like Turkey."

Economist Erdal Karagöl said Moody's grounded its rating on political uncertainties in Turkey, which is completely baseless because local elections held on March 30 resulted in a decisive victory for the AK Party and showed people are confident in the leadership of Turkey's ruling party. "Through an economic view, one can clearly see Turkey will reach its economic objectives by end of 2014," said Karagöl. "Economic data released in the last three months, such as a decreasing current account deficit, rising industry production, upside-directed confidence indices and the strong structure of public finance shows Turkey's economy is not vulnerable," Karagöl said.

Vahdettin Ertaş, the president of the Capital Markets Board (SPK), said credit rating agencies acted carelessly and hastily when downgrading Turkey's outlook but also acted excessively slow in upgrading. He also noted Turkey has no political instability. "Moody's justification for downgrade stemmed from political considerations, which makes no sense because the elections showed that Turkey's politic atmosphere is stable," said Ertaş. "Moreover, the business sector was confident in the result of the elections, as indicators showed."
Moody's previous misleading projections and grades made its recent decision on Turkey more controversial.

In Moody's Annual Report for 2008 posted on April 9, Iceland's grade was announced as AAA, the highest grade of Moody's scale.

However, the country faced its most brutal economic crisis in 2008 due to the bankruptcy of the top three banks only a short while after the Moody's report. Inflation also reached its highest level in the country at 15 percent. Geir Haarde, Iceland's prime minister during the economic crisis, was sued for overlooking the obvious signs of an upcoming crisis.

Moody's also took a relatively lax approach to growing signs of troubles in Greece, the epicenter of the current crisis, even as the country plowed ahead on a borrowing binge that jeopardized its fiscal condition.

Moody's held off dropping its strong A rating of Greece's bonds despite growing political turmoil and economic woes throughout 2009. Investor fears over Greece's short-term financing needs were "misplaced,"

Moody's said in a report in early December 2009. Twenty days after a review, the agency downgraded the nation's debt, the last of the major ratings agencies to do so. After that, the ratings of the debt-ridden country went into a virtual free fall and within six months Moody's assessed its debt as much riskier for investors, giving it junk status.
RELATED TOPICS