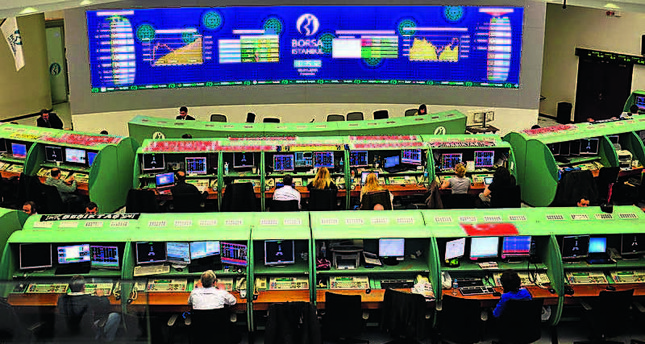 ANKARA — At the AK Party's Central Executive Committee Meeting, under the chairmanship of Prime Minister Recep Tayyip Erdoğan, attendees discussed the positive impact of stability following local elections on March 30 that resulted in decisive victory for the AK Party. They also discussed the negative impact of the Dec. 17 operation, which were carried out by the Gülen Movement's followers who aimed to destabilize Turkey's government and economy to defend their own interests.

Numan Kurtulmuş, the AK Party deputy chairman responsible for economic affairs said that local elections reversed the negative atmosphere seen in the falling stock exchange, increasing exchange rates and surging interest rates that loomed over the Turkish economy. Kurtulmuş noted that between the elections held on March 30 and April 11, stability in the political sphere and its impact on the economy caused a decrease in interest rates, a surge in the stock market and boosted the economy by TL 52.07 billion that would otherwise have been lost.

Participants in the meeting emphasized another significant result of the elections is the increase in the predictability of the economy, including during the upcoming election periods. "This will cause domestic and foreign economic actors to make evaluations in favor of our country when they make decisions," said Kurtulmuş. "When the interaction between political stability and economic stability is taken into account, this situation is a much more significant gain than the current positive figures."

He also touched on other indicators of a strong economy. "While the value of credit default swaps (CDS), a main indicator used to measure the risk premium of countries, was 188 points on Dec. 16, 2013, it climbed up to 231.65 points on March 28, 2014. This means Turkey's risk premium increased by 23.22 in the period between Dec. 16 and March 28," said Kurtulmuş during his presentation.

Following the local elections, this indicator fell to 208.51. Between March 28 and April 11, the risk premium decreased by 9.99 percent and fell to nearly the same value as before Dec 17.

The high-risk premium that emerged after the Dec. 17 operations meant the public and private sectors borrowed at higher costs, Turkey attracted less foreign capital and political risk would increase. The increase in the risk premium restricted the long-term borrowing opportunities. Even more, as Turkish banks acquired syndication loans in return for more interest, housing, personal finance and other credit were also negatively affected.

The stock index climbed up to 72.481 on April 11 and the rate of increase in the value of companies traded on Borsa Istanbul from the elections was nearly TL 26.11 billion as of April 11. It is also shown that the value of equity securities traded in Borsa Istanbul were closer to the levels before the Dec. 17 operations. All in all, the benefit of election results on interest rates, the stock exchange and exchange rates is TL 39.33 billion for a total benefit of TL 52.07 billion when added to the TL 12.7 billion from the positive influence on the foreign currency deficit in the real sector because of the value of the lira.
Last Update: Apr 16, 2014 9:27 am