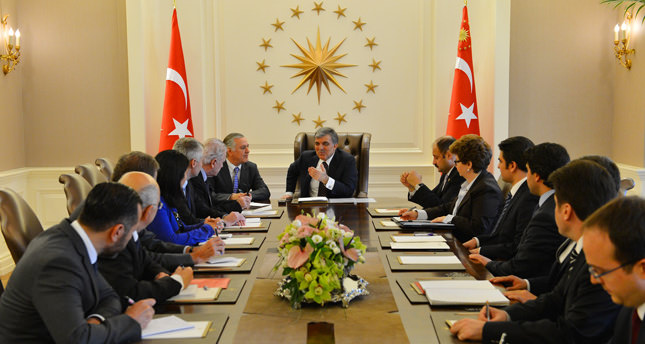 by AA
Apr 17, 2014 12:00 am
ANKARA — Turks should be feeling better about the state of their pocketbooks, the country's president said Thursday.

"Turkey is no longer a lower middle-income country," Abdullah Gül told a group of businessmen. "At present, Turkey is upper-middle class, but our goal to become a higher-income country."

Speaking at a meeting of the Turkish Industrialists' and Businessmen's Association, Gül said Turkey´s private sector is the country's main engine of development.

"I always support the success of the Turkish private sector," he said. "I see their success as our country's success. Businessmen know this country´s history better than everyone. They know all of the tribulations and achievements in the country."

The president said Turkey is continuing to make progress, having learned from recent difficulties.

"After the 2001 crisis, we renewed the country with reforms. Economic and legal reforms continued hand-in-hand. Now we need to discuss how we will move forward. There are several political opinions that are discussed in Turkey today and I think all of them are temporary."

Gül stressed that the constitution and the law are binding on the government. But he said, as well, that there is no room for a "parallel state" or any organization within the state that has loyalties other than to the state.

"Fair implementation of the law and becoming transparent are the important tasks for Turkey towards becoming a high-income country," he said.

The large turnout in municipal elections March 30 shows that Turkish democracy is healthy. Presidential election is scheduled for August 10.

Gül said that pluralism is basic to democracy. "It is important to avoid polarization in debates," he said.

Foreign capital has increased along with the confidence of foreign investors in Turkey, he said.

Turkey attracted more than $400 billion of foreign investment during the last decade, according to the country´s Ministry of Economics. Income per capita in Turkey rose from $3,500 to $10,782 over the last ten years.

The per capita income for 10 million Turkish citizens is expected to exceed $35,000 by 2022, the international consultancy firm Ernst & Young said in its February report on rapid-growth markets. According to the report, the global middle class, defined by Ernst & Young as those who earn between $10 and $100 a day, could constitute 50 percent of the world's population by 2030, an increase from 29 percent in 2008.