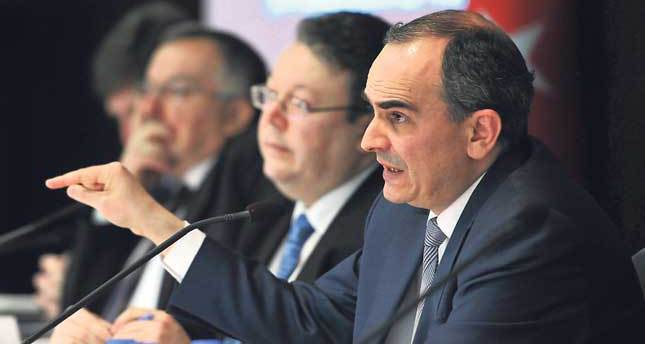 The central bank announced that it decided not decrease interest rates on Thursday citing high inflation, despite prime minister's call for a cut

ISTANBUL — He said the bank did not give any hints about future interest rates, but he predicted they would remain at current levels "until June, at least until inflation reaches its peak."

The director of Economic Research at Odeabank, İnanç Sözer, highlighted that the CBRT is more relaxed to a limited degree about inflationist risks when compared to the previous month. "Having said that the upside risks were important in March, the CBRT stresses that the decisions taken in January limit the upside risk in inflation," Sözer remarked.

Sözer noted that even if an improvement is made in the risk appetite toward developing countries in the next period thanks to the current policy compound of the CBRT, assets in Turkish lira might positively differentiate in this period.

The head economist of Halk Yatırım, Banu Kıvcı, said an interest rate cut may be expected only if concerns about monetary policy are appeased and a considerable rise in the value of the Turkish lira occurs. "The CBRT believes that it can handle the inflation risk in a short-term period with its strong monetary policy and macroeconomic measures. Decreasing domestic consumption and slowing the growth rate are also supporting the CBRT's policies. However, the CBRT is signaling that it will maintain its strong monetary policy and keep the interest high in order to save the economy against mid-term inflation risks," Kıvcı said.

Bora Tamer, an economist at Ziraat Yatırım, noted that the CBRT would continue to keep its strict position until a significant decrease is observed in inflation rates. "We expect inflation will peak in May. After the peak point, we expect inflation to decrease gradually.
At best, the CBRT may cut the interest rate by September, 2014," he said.

Tamer further highlighted that high currency prices increased inflation in the past several months, which is the reason behind the strict monetary policy of the CBRT. Prime Minister Recep Tayyip Erdoğan said early this month after his party scored a sweeping victory in the March 30 local polls that the bank should cut interest rates in order to stimulate the economy.

Erdoğan, a strong candidate for the presidential election in August, has made a turnaround in Turkey's economic fortunes a keystone of his 11- year rule, pushing the central bank, which is officially independent, for lower rates to boost credit for consumers and businesses. The bank aggressively raised key rates in January in a bid to halt a steep drop in the Turkish lira, stemming from illegal protests against the Justice and Development Party (AK Party). The January hike came amid an escalating crisis for Erdoğan by so-called corruption investigations implicating him and his inner circle months after mass anti-government protests. "The central bank should hold an extraordinary meeting to cut [rates] ... just as they met previously to raise them," Erdoğan said on April 4. "Investors in Turkey will be eager once interest rates are lowered. More investments will be made," he added.

Turkey's economy grew by 4.0 percent last year, down from nearly 9.0 percent in 2010, and analysts warn of a slowdown after months of turmoil and ahead of presidential elections in August. Emerging economy currencies, including the lira, have also taken a beating due in part to the U.S. Federal Reserve's decision to reduce stimulus measures. Ratings agency Fitch this month affirmed Turkey's credit rating at BBB- with a stable outlook but cut its economic growth forecast to 2.5 percent for this year and 3.2 percent for 2015.
I