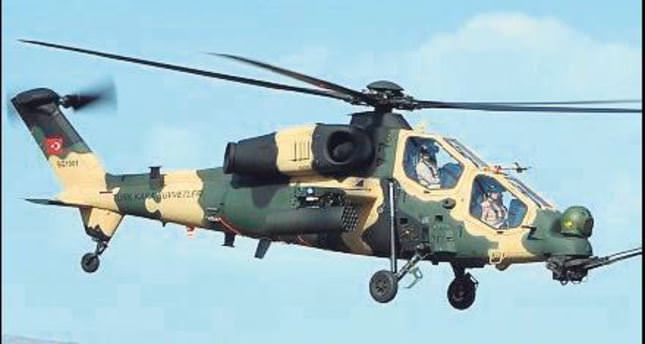 by Daily Sabah Apr 25, 2014 12:00 am
ISTANBUL — The Undersecretariat of the Defense Industry announced that the first T129 ATAK Raid Helicopter (ARH), which is the first domestically produced helicopter, was included in the inventory of the Turkish Armed Forces on April 22.

The ATAK was produced within the agreement signed between the Undersecretariat of the Defense Industry and Turkish Aerospace Industries (TUSAŞ) on Sep. 7, 2007. In the statement, the Undersecretariat of the Defense Industry said that within the context of the ATAK project, which is a milestone in establishing the infrastructure of the helicopter industry, 42 pieces of national weapons equipment were domestically manufactured and the only production line of the helicopter was installed in TUSAŞ. In the sales of the helicopter to third countries, the current work share will be maintained and the production will be done in Turkey.

Within the project, the main contractor, TUSAŞ, is responsible for the production of helicopters and the installation of avionics-weapon systems in the helicopter.

Aside from that, ASELSAN, the Turkish corporation that produces tactical military radios and defense electronic systems for the Turkish Armed Forces, will provide the computer and software systems of the T129 ARH and weapons system.